UCMP was one of the first museums to have its own website
Website
A website, also written as Web site, web site, or simply site, is a collection of related web pages containing images, videos or other digital assets. A website is hosted on at least one web server, accessible via a network such as the Internet or a private local area network through an Internet...
in the early 1990s, due to its location within a technology-oriented university with a good Internet
Internet
The Internet is a global system of interconnected computer networks that use the standard Internet protocol suite to serve billions of users worldwide...
connection. The site has been applauded for its use of visually appealing graphics, was nominated for a Webby Award
Webby Awards
A Webby Award is an international award presented annually by The International Academy of Digital Arts and Sciences for excellence on the Internet with categories in websites, interactive advertising, online film and video, and mobile....
five times, and received a medal from the Smithsonian Institution
Smithsonian Institution
The Smithsonian Institution is an educational and research institute and associated museum complex, administered and funded by the government of the United States and by funds from its endowment, contributions, and profits from its retail operations, concessions, licensing activities, and magazines...
. It also had a cameo appearance in the movie Deep Impact
Deep Impact (film)
Deep Impact is a 1998 science-fiction disaster-drama film released by Paramount Pictures and DreamWorks in the United States on May 8, 1998. The film was directed by Mimi Leder and stars Robert Duvall, Elijah Wood, Téa Leoni, and Morgan Freeman...
, albeit under an incorrect name. 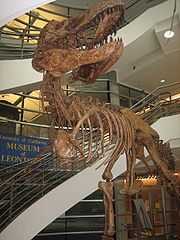 Many notable paleontologists have worked as staff at UCMP. Dates given after each name indicate when the person was part of the university faculty or working in the museum.