The University was founded in 1961 as the Technische Hogeschool Twente, the Netherlands’ third higher vocational institute of technology later to become a university (the other two being Delft and Eindhoven). The Dutch government’s decision to locate the new institute in Enschede, the main city of Twente
Twente
Twente is a non-administrative region in the eastern Netherlands. It encompasses the most urbanised and easternmost part of the province of Overijssel...
, had much to do with the north-eastern province’s rich industrial history. Another important consideration was the fact that the local economy needed a boost to compensate for the dwindling textile industry.

The University of Twente was built on the former country estate of Drienerlo, situated between Hengelo and Enschede. On this beautifully landscaped 140 hectare estate, comprising woodland, meadows and water, architects Van Tijen and Van Embden designed the Netherlands’ first - and so far only - campus university along American lines. Students and staff live, work and pursue their leisure activities on campus. Through the years, several other important architects and artists have made their own contributions to the design of the campus.

Students and staff at the University of Twente continue to form an active academic community. The beautiful campus of the University has excellent sports and cultural facilities that have stimulated the development of a rich mix of student societies, student social events, and a constant flow of new initiatives. The Student Union, which is run entirely by students, promotes the interests of all student societies and also manages several premises, including the student social centre in the heart of Enschede.

The University of Twente is an entrepreneurial research university with special focus on technological developments in the knowledge society. The university needs to be responsive to the requirements of the modern society and also has a special responsibility to develop and implement a broad knowledge potential in science and technology. In order to meet these challenges, the University of Twente advocates the establishment of a single Federation of Technical Universities in the Netherlands in 2010. The three technical universities agreed to join forces in 2005 and on 7 February 2007 the 3TU Federation was launched. The 3TU Federation aims to operate effectively at both national and international level. Within the 3TU framework the University of Twente promotes outstanding educational standards and world class research that leads the way in a number of specific areas. In pursuit of these goals, the University of Twente also wants to stimulate economic and social development regionally: in Twente
Twente
Twente is a non-administrative region in the eastern Netherlands. It encompasses the most urbanised and easternmost part of the province of Overijssel...
, the north-east of the Netherlands, and in the Gronau-Twente Euregio.

A focus on the interdependent relationship between social and technological innovation is a distinguishing feature of the University of Twente and this is reflected in the way it carries out its core activities. Strategic networks of public and private partners are encouraged. On campus, academic training occupies a central position and the University’s special character is reflected in the organisation of its degree programmes.

Teaching is of the highest standard and the University is committed to:

The University of Twente conducts world class research that:

This mission is being accomplished by a highly motivated, outstanding academic community with the full support of a Student Union charged with the tasks of promoting an active student community and a specific range of high-quality services. Financial prudence, modern human resource management, and adequate housing and facilities are important preconditions to ensure its success.

There are Six Faculties at the University of Twente:
Each Faculty is in turn organized into several departments.

The degree programmes at the University of Twente range from business administration, psychology
Psychology
Psychology is the study of the mind and behavior. Its immediate goal is to understand individuals and groups by both establishing general principles and researching specific cases. For many, the ultimate goal of psychology is to benefit society...
to applied physics
Applied physics
Applied physics is a general term for physics which is intended for a particular technological or practical use.It is usually considered as a bridge or a connection between "pure" physics and engineering....
, engineering
Engineering
Engineering is the discipline, art, skill and profession of acquiring and applying scientific, mathematical, economic, social, and practical knowledge, in order to design and build structures, machines, devices, systems, materials and processes that safely realize improvements to the lives of...
and biomedical technology
Biomedical technology
Biomedical technology broadly refers to the application of engineering and technology principles to the domain of living or biological systems. Usually inclusion of the term biomedical denotes a principal emphasis on problems related to human health and diseases, whereas terms like "biotechnology"...
. The curriculum is broad, flexible and relevant to the labour market. Most students combine coursework in their major subject with a coherent set of minors in another discipline. A growing number of foreign students are finding their way to the UT. Almost all postgraduate programmes (and several undergraduate programmes) are taught in English. Half of all PhD students at the UT now come from outside the Netherlands.

The University of Twente has a world class research programme. In the applied sciences, the emphasis is on nanotechnology, process technology, engineering, information & communication technology, and the biomedical sciences. The University also has a strong track record in management and behavioural sciences.

The University of Twente sets great importance on the useful application of knowledge in the society. Patents, life-long learning programmes, and spin-off companies testify to this commitment, as does UT’s intensive involvement in research programmes that enhance knowledge infrastructure in the Netherlands. So far, the UT has produced 600 spin-off companies; more than any other Dutch university.

From the outset, the University of Twente has sought to put the applied sciences in a wider social context. Students and researchers are always challenged to look beyond the boundaries of their own subject area and to establish links between different disciplines. The University of Twente believes that a multidisciplinary approach will stimulate innovation in science and society alike. 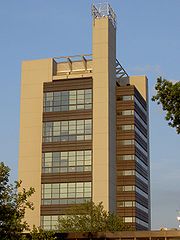