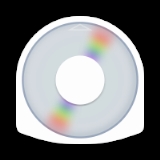 Encyclopedia
The Universal Media Disc (UMD) is an optical disc
Optical disc
In computing and optical disc recording technologies, an optical disc is a flat, usually circular disc which encodes binary data in the form of pits and lands on a special material on one of its flat surfaces...
medium developed by Sony
Sony
, commonly referred to as Sony, is a Japanese multinational conglomerate corporation headquartered in Minato, Tokyo, Japan and the world's fifth largest media conglomerate measured by revenues....
for use on their PlayStation Portable
PlayStation Portable
The is a handheld game console manufactured and marketed by Sony Corporation Development of the console was announced during E3 2003, and it was unveiled on , 2004, at a Sony press conference before E3 2004...
handheld gaming and multimedia
Multimedia
Multimedia is media and content that uses a combination of different content forms. The term can be used as a noun or as an adjective describing a medium as having multiple content forms. The term is used in contrast to media which use only rudimentary computer display such as text-only, or...
platform. It can hold up to 1.8 gigabyte
Gigabyte
The gigabyte is a multiple of the unit byte for digital information storage. The prefix giga means 109 in the International System of Units , therefore 1 gigabyte is...
s of data and is capable of housing video games, feature-length films, and music.

The primary application for UMD discs is as a storage medium for PSP
PlayStation Portable
The is a handheld game console manufactured and marketed by Sony Corporation Development of the console was announced during E3 2003, and it was unveiled on , 2004, at a Sony press conference before E3 2004...
games, although the format is also used for the storage of motion pictures and, to a lesser degree, television shows for playback on the PSP. The video is encoded in the H.264/MPEG-4 AVC
H.264/MPEG-4 AVC
H.264/MPEG-4 Part 10 or AVC is a standard for video compression, and is currently one of the most commonly used formats for the recording, compression, and distribution of high definition video...
format, with the audio in ATRAC3plus.

The BBC
BBC
The British Broadcasting Corporation is a British public service broadcaster. Its headquarters is at Broadcasting House in the City of Westminster, London. It is the largest broadcaster in the world, with about 23,000 staff...
released a number of its TV
Television
Television is a telecommunication medium for transmitting and receiving moving images that can be monochrome or colored, with accompanying sound...
titles on UMD in the UK
United Kingdom
The United Kingdom of Great Britain and Northern IrelandIn the United Kingdom and Dependencies, other languages have been officially recognised as legitimate autochthonous languages under the European Charter for Regional or Minority Languages...
, including The Office, The Mighty Boosh
The Mighty Boosh
The Mighty Boosh is a British comedy troupe featuring comedians Julian Barratt and Noel Fielding. Developed from three stage shows and a six episode radio series, it has since spawned a total of twenty television episodes for BBC Three and two live tours of the UK, as well as two live shows in the...
, Doctor Who
Doctor Who
Doctor Who is a British science fiction television programme produced by the BBC. The programme depicts the adventures of a time-travelling humanoid alien known as the Doctor who explores the universe in a sentient time machine called the TARDIS that flies through time and space, whose exterior...
and Little Britain
Little Britain
Little Britain is a British character-based comedy sketch show which was first broadcast on BBC radio and then turned into a television show. It was written by comic duo David Walliams and Matt Lucas...
.

Some adult films have been released on UMD in Japan.

Although it was implied that UMD piracy was impossible due to the proprietary nature of the discs, a combination of software security flaws in early PlayStation Portable firmware builds made it possible to extract images of a disc in the standard ISO 9660
ISO 9660
ISO 9660, also referred to as CDFS by some hardware and software providers, is a file system standard published by the International Organization for Standardization for optical disc media....
format. Sony had always included methods for loading game images from other storage mediums, as a means of future proofing the system. This has been exploited to allow full retail UMD images to be run, making piracy possible with no hardware modifications. 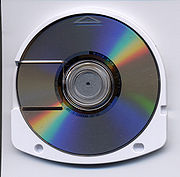 The UMD discs offer large capacity and the capability to store quality audio/video content; however, the format's proprietary nature and the lack of writers and blank media has made adoption difficult. In comparison to Sony's MiniDisc
MiniDisc
The disc is permanently housed in a cartridge with a sliding door, similar to the casing of a 3.5" floppy disk. This shutter is opened automatically by a mechanism upon insertion. The audio discs can either be recordable or premastered. Recordable MiniDiscs use a magneto-optical system to record...
format, there are a number of features lacking; the sliding shield which prevents direct disc contact on MiniDiscs is absent from all UMDs released to date, though it is an option according to the ECMA specification. 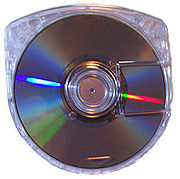 According to the official ECMA specification Sony designed the UMD to support two possible future enhancements and products.

1. Protective Shutter: Similar to the MiniDisc and 3½" floppy disc, this protective shutter will shield the inner disc from accidental contact.

The UMD format never saw implementation on any device other than the PlayStation Portable
PlayStation Portable
The is a handheld game console manufactured and marketed by Sony Corporation Development of the console was announced during E3 2003, and it was unveiled on , 2004, at a Sony press conference before E3 2004...
. As a result, the market is very limited compared to those for other optical media formats. Although poor sales early in the format's life had caused major studios Universal
Universal Pictures
-1920:* White Youth* The Flaming Disc* Am I Dreaming?* The Dragon's Net* The Adorable Savage* Putting It Over* The Line Runners-1921:* The Fire Eater* A Battle of Wits* Dream Girl* The Millionaire...
and Paramount
Paramount Pictures
Paramount Pictures Corporation is an American film production and distribution company, located at 5555 Melrose Avenue in Hollywood. Founded in 1912 and currently owned by media conglomerate Viacom, it is America's oldest existing film studio; it is also the last major film studio still...
to rescind their support, Sony Pictures, Columbia
Columbia Pictures
Columbia Pictures Industries, Inc. is an American film production and distribution company. Columbia Pictures now forms part of the Columbia TriStar Motion Picture Group, owned by Sony Pictures Entertainment, a subsidiary of the Japanese conglomerate Sony. It is one of the leading film companies...
, and other film publishers continue to distribute their films on UMD in a limited capacity. Capcom
Capcom
is a Japanese developer and publisher of video games, known for creating multi-million-selling franchises such as Devil May Cry, Chaos Legion, Street Fighter, Mega Man and Resident Evil. Capcom developed and published Bionic Commando, Lost Planet and Dark Void too, but they are less known. Its...
, HBO, Disney and various other content producers have also continued their support of the format, releasing TV shows, cartoon
Cartoon
A cartoon is a form of two-dimensional illustrated visual art. While the specific definition has changed over time, modern usage refers to a typically non-realistic or semi-realistic drawing or painting intended for satire, caricature, or humor, or to the artistic style of such works...
s and OVAs on UMD as well. Retail support of the format experienced similar troubles, and in 2006 Wal-Mart
Wal-Mart
Wal-Mart Stores, Inc. , branded as Walmart since 2008 and Wal-Mart before then, is an American public multinational corporation that runs chains of large discount department stores and warehouse stores. The company is the world's 18th largest public corporation, according to the Forbes Global 2000...
began phasing out shelf space devoted to UMD movies, with other chains soon following suit. Today, most non-specialty retail stores have stopped bringing in new UMD movies and no longer have a separate section devoted to them, with a few stray unsold titles mixed in amongst the regular PSP games.

In August 2007, Multimedia Recovery brought to the market their UMD Replacement Case after many complaints from PlayStation Portable owners that the outer casing of the UMD disc was cracking or pulling apart due to the poor design. This causes the UMD to become unreadable in the PlayStation Portable.

In late 2009, Sony began pushing developers away from the UMD format and towards digital distribution
Digital distribution
Online distribution, digital distribution, or electronic software distribution is the practice of delivering content without the use of physical media, typically by downloading via the internet directly to a consumer's device. Online distribution bypasses conventional physical distribution media,...
on the PlayStation Network in preparation for the launch of the digital-download-only PSP Go
PSP Go
The PSP Go is a version of the PlayStation Portable handheld game console manufactured by Sony. It was released on October 1, 2009 in American and European territories, and on November 1 in Japan. It was revealed prior to E3 2009 through Sony's Qore VOD service...
, which is the first PSP model to not include a UMD drive. However, the new system has experienced lackluster sales compared to previous models, with most consumers still choosing the UMD-compatible PSP-3000 model, which continues to be sold along side the PSP Go. And despite the earlier push for PlayStation Network releases around the PSP Go's launch, over half of the PSP's library is still only available in UMD format including Crisis Core: Final Fantasy VII and Kingdom Hearts: Birth by Sleep, though there have been a few PlayStation Network-only releases since the PSP Go's launch, such as LocoRoco Midnight Carnival
LocoRoco Midnight Carnival
LocoRoco Midnight Carnival is the last game in the LocoRoco series for the PlayStation Portable that was released on October 29, 2009 for Halloween as a PlayStation Network exclusive. The game is a spin-off that continues the story of LocoRoco 2 and features a new move called "Boing!"...
. Still, most new games continue to be distributed via UMD, and, aside from those published by SCE
Sony Computer Entertainment
Sony Computer Entertainment, Inc. is a major video game company specializing in a variety of areas in the video game industry, and is a wholly owned subsidiary and part of the Consumer Products & Services Group of Sony...
, not all have been released on PlayStation Network. In 2011,a faster and slimmer version of the PSP-3000 came out called PSP-E1000 with a UMD Slot marking the rebirth of UMD .
The successor of the PlayStation Portable, the PlayStation Vita, was announced to introduce the use of a new type of media for its software.