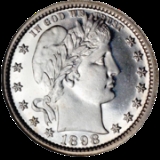 Encyclopedia
Liberty Head designs appeared on United States
United States
The United States of America is a federal constitutional republic comprising fifty states and a federal district...
minor silver
Silver
Silver is a metallic chemical element with the chemical symbol Ag and atomic number 47. A soft, white, lustrous transition metal, it has the highest electrical conductivity of any element and the highest thermal conductivity of any metal...
coinage (the dime, quarter, and half dollar) from 1892 to 1916. They derive their common name from their designer, Chief Engraver Charles E. Barber
Charles E. Barber
Charles Edward Barber was the sixth Chief Engraver of the United States Mint from 1879 until his death in 1917. He succeeded his father, William Barber, in the position...
.

The basic obverse
Obverse and reverse
Obverse and its opposite, reverse, refer to the two flat faces of coins and some other two-sided objects, including paper money, flags , seals, medals, drawings, old master prints and other works of art, and printed fabrics. In this usage, obverse means the front face of the object and reverse...
design of the Barber silver coinage consisted of a Liberty head with a cap and wreath. This figure was inspired both by classical Greek and Roman models and by the designs of various 19th-century French
France
The French Republic , The French Republic , The French Republic , (commonly known as France , is a unitary semi-presidential republic in Western Europe with several overseas territories and islands located on other continents and in the Indian, Pacific, and Atlantic oceans. Metropolitan France...
coinage. The word "LIBERTY" appeared on the headband in incuse; since it wears relatively quickly in circulation, it is often used by numismatists to help determine the condition of circulated coins. The Liberty head is flanked by six stars on the left and seven on the right, and the motto "IN GOD WE TRUST
In God We Trust
"In God We Trust" was adopted as the official motto of the United States in 1956. It is also the motto of the U.S. state of Florida. The Legality of this motto has been questioned because of the United States Constitution forbidding the government to make any law respecting the establishment of a...
" appears above it. The date is centered below the figure.

There were two basic reverse
Obverse and reverse
Obverse and its opposite, reverse, refer to the two flat faces of coins and some other two-sided objects, including paper money, flags , seals, medals, drawings, old master prints and other works of art, and printed fabrics. In this usage, obverse means the front face of the object and reverse...
designs on Barber coinage. The dime featured a wreath
Wreath
A wreath is an assortment of flowers, leaves, fruits, twigs and/or various materials that is constructed to resemble a ring. They are used typically as Christmas decorations to symbolize the coming of Christ, also known as the Advent season in Christianity. They are also used as festive headdresses...
of American agricultural products with the words "ONE DIME" in the center. The mint mark
Mint mark
A mint mark is an inscription on a coin indicating the mint where the coin was produced.-History:Mint marks were first developed to locate a problem. If a coin was underweight, or overweight, the mint mark would immediately tell where the coin was minted, and the problem could be located and fixed...
, if any, was positioned below the wreath. This reverse design differed little from that of the old Seated Liberty dime
United States Seated Liberty coinage
The Seated Liberty designs appeared on most regular-issue silver United States coinage during the mid- and late-nineteenth century, from 1836 through 1891. The denominations which featured the Seated Liberty design included the half dime, the dime, the quarter, the half dollar, and until 1873 the...
.

All Barber Coinage saw very heavy and long term use in daily commerce and, consequentially, most surviving examples are heavily worn, this is especially true of the Quarters and Half Dollars. It is frequently said by collectors and dealers that Barber Coinage is full of condition rarities, that is, coins which are very scarce in higher grades. A good example of this is the 1901-S Quarter, which is the most valuable regular issue Barber coin. As such even extremely worn specimens are worth thousands of dollars and are frequently submitted for third party grading. Of the 566 1901-S Quarters graded by PCGS, 488, or 86% of them, grade below fine, and 224, or 40% of those examples graded, were below Good. Barber Coinage in the so-called "Mid Grades" of Fine through Extremely Fine can be very challenging to locate, with some otherwise common coins, such as the 1892 Philadelphia Half Dollar, having populations in Very Fine of less than 10 coins at PCGS.

The Barber dime series includes the mammoth rarity, the 1894-S. It is one of the most valuable coins ever produced by the United States Mint. Only 24 were produced. Of those, only nine remain, one of which sold for $1.9 million in 2007. However, the 1894-S dime is considered to be a Proof strike. As such, the most valuable business strike dime is the 1895-O.

The Barber half dollars are, like all coins in the series, challenging to find in higher grades. There is no immensely expensive key date
Key date
In coin collecting, a key date refers to a date of a given coin series or set that is harder to obtain than other dates in the series. The next level of difficult to obtain coins in series are often referred to as semi-key dates or simply semi-keys.For example, the 1909-S VDB is the key date in...
in the series, the most valuable date being the 1904-S. However, a very small number of 1892 Halves minted in New Orleans were made from dies which used a Mint Mark punch originally intended for Quarter Dollar dies. These coins are known as the 1892-O "Micro O" and are extremely valuable, with fewer than 60 known to exist.