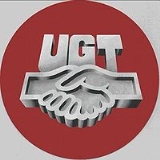 Encyclopedia
The Unión General de Trabajadores (UGT, General Union of Workers) is a major Spanish
Spain
Spain , officially the Kingdom of Spain languages]] under the European Charter for Regional or Minority Languages. In each of these, Spain's official name is as follows:;;;;;;), is a country and member state of the European Union located in southwestern Europe on the Iberian Peninsula...
trade union
Trade union
A trade union, trades union or labor union is an organization of workers that have banded together to achieve common goals such as better working conditions. The trade union, through its leadership, bargains with the employer on behalf of union members and negotiates labour contracts with...
, historically affiliated with the Spanish Socialist Workers' Party
Spanish Socialist Workers' Party
The Spanish Socialist Workers' Party is a social-democratic political party in Spain. Its political position is Centre-left. The PSOE is the former ruling party of Spain, until beaten in the elections of November 2011 and the second oldest, exceeded only by the Partido Carlista, founded in...
(PSOE).

The UGT was founded 12 August 1888 by Pablo Iglesias Posse
Pablo Iglesias
Paulino Iglesias Posse , better known as Pablo Iglesias, was a Spanish socialist and labour leader...
(b.Ferrol 1850- d.Madrid
Madrid
Madrid is the capital and largest city of Spain. The population of the city is roughly 3.3 million and the entire population of the Madrid metropolitan area is calculated to be 6.271 million. It is the third largest city in the European Union, after London and Berlin, and its metropolitan...
1925) in Mataró
Mataró
Mataró is the capital and largest city of the comarca of the Maresme, in the province of Barcelona, Catalonia Autonomous Community, Spain. It is located on the Costa del Maresme, to the south of Costa Brava, between Cabrera de Mar and Sant Andreu de Llavaneres, to the north-east of Barcelona. , it...
(Barcelona
Barcelona
Barcelona is the second largest city in Spain after Madrid, and the capital of Catalonia, with a population of 1,621,537 within its administrative limits on a land area of...
), with Marxist
Marxism
Marxism is an economic and sociopolitical worldview and method of socioeconomic inquiry that centers upon a materialist interpretation of history, a dialectical view of social change, and an analysis and critique of the development of capitalism. Marxism was pioneered in the early to mid 19th...
socialism
Socialism
Socialism is an economic system characterized by social ownership of the means of production and cooperative management of the economy; or a political philosophy advocating such a system. "Social ownership" may refer to any one of, or a combination of, the following: cooperative enterprises,...
as its ideological basis, despite its statutory apolitical status. Until its nineteenth Congress in 1920, it did not consider class struggle
Class struggle
Class struggle is the active expression of a class conflict looked at from any kind of socialist perspective. Karl Marx and Friedrich Engels wrote "The [written] history of all hitherto existing society is the history of class struggle"....
as a basic principle
Principle
A principle is a law or rule that has to be, or usually is to be followed, or can be desirably followed, or is an inevitable consequence of something, such as the laws observed in nature or the way that a system is constructed...
of trade union
Trade union
A trade union, trades union or labor union is an organization of workers that have banded together to achieve common goals such as better working conditions. The trade union, through its leadership, bargains with the employer on behalf of union members and negotiates labour contracts with...
action. Being a member of the UGT implies an affiliation
Affiliated trade union
In British politics, the term affiliated trade union refers to a trade union that has an affiliation to the British Labour Party.The Party was created by the trade unions and socialist societies in 1900 as the Labour Representation Committee...
to the PSOE and vice versa. 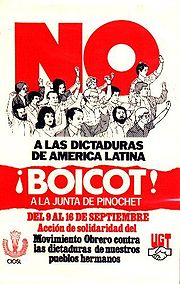 During World War I
World War I
World War I , which was predominantly called the World War or the Great War from its occurrence until 1939, and the First World War or World War I thereafter, was a major war centred in Europe that began on 28 July 1914 and lasted until 11 November 1918...
era, the UGT followed a tactical line of close relationship and unity of action with the Confederación Nacional del Trabajo
Confederación Nacional del Trabajo
The Confederación Nacional del Trabajo is a Spanish confederation of anarcho-syndicalist labor unions affiliated with the International Workers Association . When working with the latter group it is also known as CNT-AIT...
(CNT, National Labour Confederation). This era came to a sudden end with the advent of the dictatorship of Miguel Primo de Rivera
Miguel Primo de Rivera
Miguel Primo de Rivera y Orbaneja, 2nd Marquis of Estella, 22nd Count of Sobremonte, Knight of Calatrava was a Spanish dictator, aristocrat, and a military official who was appointed Prime Minister by the King and who for seven years was a dictator, ending the turno system of alternating...
, who gave a legal monopoly on labor organizing to his own government-sponsored union. While the CNT opted for a radical confrontation with the regime, and were prohibited on this account, the UGT, although in disagreement with the dictatorship, adopted a collaborative attitude in order to continue to operate legally. The radicalization during the period of the Second Spanish Republic
Second Spanish Republic
The Second Spanish Republic was the government of Spain between April 14 1931, and its destruction by a military rebellion, led by General Francisco Franco....
of the wing led by Francisco Largo Caballero
Francisco Largo Caballero
Francisco Largo Caballero was a Spanish politician and trade unionist. He was one of the historic leaders of the Spanish Socialist Workers' Party and of the Workers' General Union...
, when the UGT surpassed a million members, and the bloody breakout of the Spanish Civil War
Spanish Civil War
The Spanish Civil WarAlso known as The Crusade among Nationalists, the Fourth Carlist War among Carlists, and The Rebellion or Uprising among Republicans. was a major conflict fought in Spain from 17 July 1936 to 1 April 1939...
deepened the internal fissures that resulted in the departure of Largo Caballero from the position of UGT secretary general in 1937.

General Francisco Franco
Francisco Franco
Francisco Franco y Bahamonde was a Spanish general, dictator and head of state of Spain from October 1936 , and de facto regent of the nominally restored Kingdom of Spain from 1947 until his death in November, 1975...
confined the UGT to exile and clandesitinity after his victory in the Spanish Civil War until his death in 1975. The Union emerged from secrecy during the democratic transition after Franco's death, as did the communist Workers' Commissions (Comisiones Obreras, CCOO). The UGT and CCOO, between them, constitute the major avenues for workers' representation in today's Spain, with the anarcho-syndicalist
Anarcho-syndicalism
Anarcho-syndicalism is a branch of anarchism which focuses on the labour movement. The word syndicalism comes from the French word syndicat which means trade union , from the Latin word syndicus which in turn comes from the Greek word σύνδικος which means caretaker of an issue...
Confederación General del Trabajo (CGT) a distant third.

The UGT declares itself to be an institution of productive workers, organized along lines of trades and liberal professions, which respects freedom of thought
Freedom of thought
Freedom of thought is the freedom of an individual to hold or consider a fact, viewpoint, or thought, independent of others' viewpoints....
, leading toward the transformation of the society, in order to establish it on the basis of social justice
Social justice
Social justice generally refers to the idea of creating a society or institution that is based on the principles of equality and solidarity, that understands and values human rights, and that recognizes the dignity of every human being. The term and modern concept of "social justice" was coined by...
, equality
Social equality
Social equality is a social state of affairs in which all people within a specific society or isolated group have the same status in a certain respect. At the very least, social equality includes equal rights under the law, such as security, voting rights, freedom of speech and assembly, and the...
and solidarity.

The Unión de Trabajadores por Cuenta Propia (UTCP, Union of Self-Employed Workers) is not an organism of UGT. It is a bottom-up association, formed by the farmers' union UPA and the professional and autonomous workers' union, UPTA, who united in this manner to enhance their representation inside the Union and to form a united front on factional issues where they have common interests.