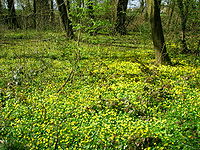 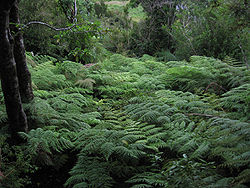 Understory is the term for the area of a forest
Forest
A forest, also referred to as a wood or the woods, is an area with a high density of trees. As with cities, depending where you are in the world, what is considered a forest may vary significantly in size and have various classification according to how and what of the forest is composed...
which grows at the lowest height level below the forest canopy
Canopy (forest)
In biology, the canopy is the aboveground portion of a plant community or crop, formed by plant crowns.For forests, canopy also refers to the upper layer or habitat zone, formed by mature tree crowns and including other biological organisms .Sometimes the term canopy is used to refer to the extent...
. Plants
Plant
Plants are living organisms belonging to the kingdom Plantae. Precise definitions of the kingdom vary, but as the term is used here, plants include familiar organisms such as trees, flowers, herbs, bushes, grasses, vines, ferns, mosses, and green algae. The group is also called green plants or...
in the understory consist of a mixture of seedlings and saplings of canopy trees together with understory shrub
Shrub
A shrub or bush is distinguished from a tree by its multiple stems and shorter height, usually under 5–6 m tall. A large number of plants may become either shrubs or trees, depending on the growing conditions they experience...
s and herbs. Young canopy trees
Tree
A tree is a perennial woody plant. It is most often defined as a woody plant that has many secondary branches supported clear of the ground on a single main stem or trunk with clear apical dominance. A minimum height specification at maturity is cited by some authors, varying from 3 m to...
often persist as suppressed juveniles for decades while they wait for an opening in the forest overstory which will enable their growth into the canopy. On the other hand, understory shrubs are able to complete their life cycle
Biological life cycle
A life cycle is a period involving all different generations of a species succeeding each other through means of reproduction, whether through asexual reproduction or sexual reproduction...
in the shade of the forest canopy. Also some small trees such as dogwood
Dogwood
The genus Cornus is a group of about 30-60 species of woody plants in the family Cornaceae, commonly known as dogwoods. Most dogwoods are deciduous trees or shrubs, but a few species are nearly herbaceous perennial subshrubs, and a few of the woody species are evergreen...
and holly
Holly
Ilex) is a genus of 400 to 600 species of flowering plants in the family Aquifoliaceae, and the only living genus in that family. The species are evergreen and deciduous trees, shrubs, and climbers from tropics to temperate zones world wide....
rarely grow tall and are generally understory trees.

Forest understories have lower light intensities than at the canopy top. The wavelength
Wavelength
In physics, the wavelength of a sinusoidal wave is the spatial period of the wave—the distance over which the wave's shape repeats.It is usually determined by considering the distance between consecutive corresponding points of the same phase, such as crests, troughs, or zero crossings, and is a...
s of light that are available are only a subset of those that are available in full sunlight. Understory plants must thus often be shade tolerant—they must be able to photosynthesize
Photosynthesis
Photosynthesis is a chemical process that converts carbon dioxide into organic compounds, especially sugars, using the energy from sunlight. Photosynthesis occurs in plants, algae, and many species of bacteria, but not in archaea. Photosynthetic organisms are called photoautotrophs, since they can...
successfully with the limited amount of light that is available. They are often able to use wavelengths not available to canopy trees. In temperate deciduous forests
Temperate broadleaf and mixed forests
Mixed forests are a temperate and humid biome. The typical structure of these forests includes four layers. The uppermost layer is the canopy composed of tall mature trees ranging from 33 to 66 m high. Below the canopy is the three-layered, shade-tolerant understory that is roughly 9 to...
understory seedlings "leaf out" before the canopy trees do. This is important because it allows the understory plants a window in which to photosynthesize without the canopy present. This brief period (usually 1–2 weeks) is often a crucial period which allows the plant to maintain a net positive carbon balance
Carbon cycle
The carbon cycle is the biogeochemical cycle by which carbon is exchanged among the biosphere, pedosphere, geosphere, hydrosphere, and atmosphere of the Earth...
over the course of the year.

Forest understories also have higher humidity
Humidity
Humidity is a term for the amount of water vapor in the air, and can refer to any one of several measurements of humidity. Formally, humid air is not "moist air" but a mixture of water vapor and other constituents of air, and humidity is defined in terms of the water content of this mixture,...
than exposed areas. The forest canopy reduces solar radiation, so the ground does not heat up as rapidly. Consequently, the understory dries out more slowly than the more exposed areas do. The greater humidity allows fungi and other decomposers to flourish. This drives nutrient cycling
Biogeochemical cycle
In ecology and Earth science, a biogeochemical cycle or substance turnover or cycling of substances is a pathway by which a chemical element or molecule moves through both biotic and abiotic compartments of Earth. A cycle is a series of change which comes back to the starting point and which can...
, and provides favorable microclimate
Microclimate
A microclimate is a local atmospheric zone where the climate differs from the surrounding area. The term may refer to areas as small as a few square feet or as large as many square miles...
s for many animal
Animal
Animals are a major group of multicellular, eukaryotic organisms of the kingdom Animalia or Metazoa. Their body plan eventually becomes fixed as they develop, although some undergo a process of metamorphosis later on in their life. Most animals are motile, meaning they can move spontaneously and...
s and plant
Plant
Plants are living organisms belonging to the kingdom Plantae. Precise definitions of the kingdom vary, but as the term is used here, plants include familiar organisms such as trees, flowers, herbs, bushes, grasses, vines, ferns, mosses, and green algae. The group is also called green plants or...
s.
The source of this article is wikipedia, the free encyclopedia.  The text of this article is licensed under the GFDL.