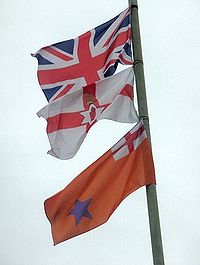 Ulster loyalism is an ideology that is opposed to a united Ireland
United Ireland
A united Ireland is the term used to refer to the idea of a sovereign state which covers all of the thirty-two traditional counties of Ireland. The island of Ireland includes the territory of two independent sovereign states: the Republic of Ireland, which covers 26 counties of the island, and the...
. It can mean either support for upholding Northern Ireland
Northern Ireland
Northern Ireland is one of the four countries of the United Kingdom. Situated in the north-east of the island of Ireland, it shares a border with the Republic of Ireland to the south and west...
's status as a constituent part of the United Kingdom
United Kingdom
The United Kingdom of Great Britain and Northern IrelandIn the United Kingdom and Dependencies, other languages have been officially recognised as legitimate autochthonous languages under the European Charter for Regional or Minority Languages...
(i.e. unionism
Unionism in Ireland
Unionism in Ireland is an ideology that favours the continuation of some form of political union between the islands of Ireland and Great Britain...
), support for Northern Ireland independence, or support for loyalist paramilitaries
Paramilitary
A paramilitary is a force whose function and organization are similar to those of a professional military, but which is not considered part of a state's formal armed forces....
. It is a belief most predominant among, and traditionally held by, Protestants in Northern Ireland.

Most loyalist groups seek to maintain Northern Ireland's position within the UK while a minority support Northern Ireland independence. Some have reserved the term loyalist to describe working-class
Working class
Working class is a term used in the social sciences and in ordinary conversation to describe those employed in lower tier jobs , often extending to those in unemployment or otherwise possessing below-average incomes...
unionists willing to use illegal violence in order to achieve their aims. However, others, such as Garret FitzGerald
Garret FitzGerald
Garret FitzGerald was an Irish politician who was twice Taoiseach of Ireland, serving in office from July 1981 to February 1982 and again from December 1982 to March 1987. FitzGerald was elected to Seanad Éireann in 1965 and was subsequently elected to Dáil Éireann as a Fine Gael TD in 1969. He...
, argue that loyalism is simply "loyalty to Ulster not to the Union with Britain and it is mis-described as unionism".

Upon the partition of Ireland
Partition of Ireland
The partition of Ireland was the division of the island of Ireland into two distinct territories, now Northern Ireland and the Republic of Ireland . Partition occurred when the British Parliament passed the Government of Ireland Act 1920...
in 1921, six of the nine counties in the province of Ulster
Ulster
Ulster is one of the four provinces of Ireland, located in the north of the island. In ancient Ireland, it was one of the fifths ruled by a "king of over-kings" . Following the Norman invasion of Ireland, the ancient kingdoms were shired into a number of counties for administrative and judicial...
were excluded from the independent Irish Free State
Irish Free State
The Irish Free State was the state established as a Dominion on 6 December 1922 under the Anglo-Irish Treaty, signed by the British government and Irish representatives exactly twelve months beforehand...
(later the Republic of Ireland
Republic of Ireland
Ireland , described as the Republic of Ireland , is a sovereign state in Europe occupying approximately five-sixths of the island of the same name. Its capital is Dublin. Ireland, which had a population of 4.58 million in 2011, is a constitutional republic governed as a parliamentary democracy,...
). These counties, four of which had slim Protestant
Protestantism
Protestantism is one of the three major groupings within Christianity. It is a movement that began in Germany in the early 16th century as a reaction against medieval Roman Catholic doctrines and practices, especially in regards to salvation, justification, and ecclesiology.The doctrines of the...
majorities, remained a part of the United Kingdom. Two other Ulster counties also remained part of the UK, despite having Irish nationalist
Irish nationalism
Irish nationalism manifests itself in political and social movements and in sentiment inspired by a love for Irish culture, language and history, and as a sense of pride in Ireland and in the Irish people...
(pro-independence) majorities. Both unionist and nationalist communities have allowed or encouraged sectarianism
Sectarianism
Sectarianism, according to one definition, is bigotry, discrimination or hatred arising from attaching importance to perceived differences between subdivisions within a group, such as between different denominations of a religion, class, regional or factions of a political movement.The ideological...
among Protestants (associated with unionism) and Roman Catholics (associated with nationalism) to further political aims .

The difference of opinion between Northern Ireland's Irish nationalist/Catholic population (which mostly supports Irish reunification) and its Protestant/unionist population (which mostly supports remaining part of the UK) led to a long-running bloody conflict known as The Troubles
The Troubles
The Troubles was a period of ethno-political conflict in Northern Ireland which spilled over at various times into England, the Republic of Ireland, and mainland Europe. The duration of the Troubles is conventionally dated from the late 1960s and considered by many to have ended with the Belfast...
.


In Great Britain, a number of small far-right parties have and still do express support for loyalist paramilitaries, and loyalism in general. This includes the British National Front
British National Front
The National Front is a far right, white-only political party whose major political activities took place during the 1970s and 1980s. Its popularity peaked in the 1979 general election, when it received 191,719 votes ....
(who registered to stand in Northern Ireland) and the British People's Party.

In the table below, "operational" refers to the period when the group waged its paramilitary/vigilante campaign.