Encyclopedia
Uckers is a two or four player board game traditionally played in the Royal Navy
Royal Navy
The Royal Navy is the naval warfare service branch of the British Armed Forces. Founded in the 16th century, it is the oldest service branch and is known as the Senior Service...
, Royal Canadian Navy, Royal New Zealand Navy
Royal New Zealand Navy
The Royal New Zealand Navy is the maritime arm of the New Zealand Defence Force...
and Royal Australian Navy
Royal Australian Navy
The Royal Australian Navy is the naval branch of the Australian Defence Force. Following the Federation of Australia in 1901, the ships and resources of the separate colonial navies were integrated into a national force: the Commonwealth Naval Forces...
. It is believed to originate in the 18th/19th centuries from the Indian game "Pachisi" although the first reference to it in print does not appear until 1946. It is mentioned in a diary by EJF Records (served 1928-1950) in 1937 as "Huckers".

Uckers is generally played using the rules stated below, but they vary from one branch of the Navy to another. It is also played in units of the Army Air Corps (United Kingdom) where it was introduced by aircraft technicians on loan from the Fleet Air Arm in the late 1950s/early 1960s.

It is similar to the board game Ludo
Ludo (board game)
Ludo is a simple board game for two to four players, in which the players race their four tokens from start to finish according to dice rolls. Like other cross and circle games, it is similar to the Indian Pachisi, but simpler...
and is based on the same principles; getting your four pieces around the board before the opposition. However, the whole point of Uckers, and this may vary according to personal preferences, is to get all your pieces home without your opponent getting any home at all. This is known as an 8 piecer. The ultimate win is when you get all your pieces home and your opponent has all their pieces still in the base, that is called an 8 piece in harbour, or an eight piece dicking. 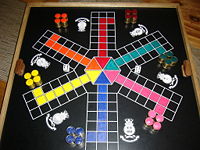 The game is played by either two or four people, if there are two people playing then each player takes two opposite colours, yellow and red vs green and blue If there are four players then the players opposite each other become partners, so Yellow partners with Red, and Green partners with Blue.

To travel around the board two dice
Dice
A die is a small throwable object with multiple resting positions, used for generating random numbers...
are thrown, players moving the amount shown on the dice, a six permitting an extra turn. To see who goes first each player throws the dice and whoever throws the highest starts.

In order to exit your base it is necessary for you to throw a six, which results in you putting your piece on the coloured square joining your base known as the doorstep. However, if on the very first throw you throw snake eyes (two ones) then all your (and your partner's) pieces come out of the base onto the doorstep and play continues with the next player. If on rolling snake eyes on the first throw a player again throws snake eyes on their second throw all of their pieces return to the base.

If a player's piece lands on a square with an opponent's piece, then, as in Ludo, that piece is sent back to the opponent's base.

If your piece lands on a square with a playing piece of the same colour then this is known as a blob and is basically a barrier. An opposing piece is not allowed to jump over them, but friendly pieces can. The only way an opposing piece can get by a blob is to destroy it. To do this they will need to have a playing piece adjacent to the blob and then on their turn throw X + 1 sixes where X = the number of playing pieces forming the blob. Note that if the blob is on your doorstep, then you must throw an additional six (i.e. X + 2 sixes) to remove the blob and exit your homebase.

If one succeeds in knocking the blob off then the single playing piece used to attack the blob is moved to the square that the blob was on and the pieces forming the blob are returned to the base. Play then continues to the next player.

If a player's piece lands on a square with a playing piece that belongs to their partner or is the other colour that you are playing with, then this is called a mixi blob (or a mixed barrier). Unlike blobs, a mixi blob is equivalent to a single playing piece so the opponent can land on the square and send all the playing bits back to their relevant bases. The opponent can pass over a friendly mixi blob, so there is no security and a friendly player can not attack a blob that you maybe adjacent to if your piece is part of a mixi blob.

As in Ludo, one does need to roll the exact number of spaces left to get home and if a player's pieces are in the tube (or pipe)then they cannot be attacked unless they are playing WAFU rules. If you are playing with a partner and they get all their pieces home first, then they can continue rolling in the hopes of getting a six. If they do roll a six, then, on your next turn, they can then roll for you and move your pieces as well. However, pieces cannot be moved by your partner once they are in the tube.

A player can either move normally or attack (or six) a blob. You cannot move a piece next to a blob and then on the same go attack it.

If you can use the die with the highest value, then you must do so.

Another rule, which can be accepted in the game, is the formation of superblobs, this is more than two of one players pieces on the same space. A superblob can not be moved around the board.
Once a player has got one or more pieces into the pipe, an opposing player that lands on the end of that pipe can, on their next go, declare suckback. The player then rolls the dice and if one of the numbers on the dice, or the sum of both, is the same as the number of spaces the other piece is in on the last line, it is returned to its base.

Mixi-blobs can also be formed, where the blob consists of more than one colour. This is often done when two players have paired up as the blob can no longer be moved. To move the blob the top piece must be moved, and so on until the blob becomes all one colour.