USS Queenfish (SSN-651), a Sturgeon-class
Sturgeon class submarine
The Sturgeon class were a class of nuclear-powered fast attack submarines in service with the United States Navy from the 1960s until 2004. They were the "work horses" of the submarine attack fleet throughout much of the Cold War...
attack submarine, was the second ship of the United States Navy
United States Navy
The United States Navy is the naval warfare service branch of the United States Armed Forces and one of the seven uniformed services of the United States. The U.S. Navy is the largest in the world; its battle fleet tonnage is greater than that of the next 13 largest navies combined. The U.S...
to be named for the queenfish
Queenfish
Queenfish are a species of croaker occurring from Uncle Sam Bank, Baja California, to Yaquina Bay, Oregon; they are the only species in the genus Seriphus. They are common during summer in shallow water around pier pilings on sandy bottoms. They are found at depths up to 180 feet; however, occur...
, a small food fish found off the Pacific coast of North America
North America
North America is a continent wholly within the Northern Hemisphere and almost wholly within the Western Hemisphere. It is also considered a northern subcontinent of the Americas...
.

The contract to build Queenfish was awarded to Newport News Shipbuilding and Dry Dock Company
Northrop Grumman Newport News
Newport News Shipbuilding , originally Newport News Shipbuilding and Drydock Company , was the largest privately-owned shipyard in the United States prior to being purchased by Northrop Grumman in 2001...
in Newport News
Newport News, Virginia
Newport News is an independent city located in the Hampton Roads metropolitan area of Virginia. It is at the southeastern end of the Virginia Peninsula, on the north shore of the James River extending southeast from Skiffe's Creek along many miles of waterfront to the river's mouth at Newport News...
, Virginia
Virginia
The Commonwealth of Virginia , is a U.S. state on the Atlantic Coast of the Southern United States. Virginia is nicknamed the "Old Dominion" and sometimes the "Mother of Presidents" after the eight U.S. presidents born there...
, on 26 March 1963 and her keel
Keel
In boats and ships, keel can refer to either of two parts: a structural element, or a hydrodynamic element. These parts overlap. As the laying down of the keel is the initial step in construction of a ship, in British and American shipbuilding traditions the construction is dated from this event...
was laid down there on 11 May 1964. She was launched
Ship naming and launching
The ceremonies involved in naming and launching naval ships are based in traditions thousands of years old.-Methods of launch:There are three principal methods of conveying a new ship from building site to water, only two of which are called "launching." The oldest, most familiar, and most widely...
on 25 February 1966, sponsored by the Honorable Julia Butler Hansen
Julia Butler Hansen
Julia Butler Hansen , born Julia Caroline Butler, June 14, 1907, in Portland, Oregon, USA, served as a member of the United States House of Representatives from 1960-1974. She represented Washington's Third Congressional District as a Democrat. She was the second woman and first Democratic woman...
(1907–1988), U.S. Representative
United States House of Representatives
The United States House of Representatives is one of the two Houses of the United States Congress, the bicameral legislature which also includes the Senate.The composition and powers of the House are established in Article One of the Constitution...
from Washingtons 3rd Congressional District
Washington's 3rd congressional district
Washington's 3rd congressional district encompasses the southernmost portion of Western Washington, from Olympia south to the Columbia River. It includes the counties of Lewis, Pacific, Wahkiakum, Cowlitz, and Clark, and the majority of Thurston and Skamania counties...
(1960–1974), and commissioned
Ship commissioning
Ship commissioning is the act or ceremony of placing a ship in active service, and may be regarded as a particular application of the general concepts and practices of project commissioning. The term is most commonly applied to the placing of a warship in active duty with its country's military...
on 6 December 1966 with Commander
Commander
Commander is a naval rank which is also sometimes used as a military title depending on the individual customs of a given military service. Commander is also used as a rank or title in some organizations outside of the armed forces, particularly in police and law enforcement.-Commander as a naval...
Jackson B. Richard in command.

Queenfish was assigned Pearl Harbor
Pearl Harbor
Pearl Harbor, known to Hawaiians as Puuloa, is a lagoon harbor on the island of Oahu, Hawaii, west of Honolulu. Much of the harbor and surrounding lands is a United States Navy deep-water naval base. It is also the headquarters of the U.S. Pacific Fleet...
, Hawaii
Hawaii
Hawaii is the newest of the 50 U.S. states , and is the only U.S. state made up entirely of islands. It is the northernmost island group in Polynesia, occupying most of an archipelago in the central Pacific Ocean, southwest of the continental United States, southeast of Japan, and northeast of...
, as her home port
Home port
A vessel's home port is the port at which it is based, which may not be the same as its port of registry shown on its registration documents and lettered on the stern of the ship's hull...
.
In 1970, Queenfish operated below the polar ice pack in the Arctic
Arctic
The Arctic is a region located at the northern-most part of the Earth. The Arctic consists of the Arctic Ocean and parts of Canada, Russia, Greenland, the United States, Norway, Sweden, Finland, and Iceland. The Arctic region consists of a vast, ice-covered ocean, surrounded by treeless permafrost...
, mapping the Arctic Ocean
Arctic Ocean
The Arctic Ocean, located in the Northern Hemisphere and mostly in the Arctic north polar region, is the smallest and shallowest of the world's five major oceanic divisions...
s surface for potential military purposes in the event of a war between the Soviet Union
Soviet Union
The Soviet Union , officially the Union of Soviet Socialist Republics , was a constitutionally socialist state that existed in Eurasia between 1922 and 1991....
and the United States
United States
The United States of America is a federal constitutional republic comprising fifty states and a federal district...
. 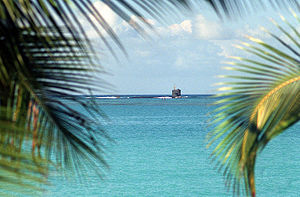 Queenfish was decommissioned
Ship decommissioning
To decommission a ship is to terminate her career in service in the armed forces of her nation. A somber occasion, it has little of the elaborate ceremony of ship commissioning, but carries significant tradition....
on 8 November 1991 and stricken from the Naval Vessel Register
Naval Vessel Register
The Naval Vessel Register is the official inventory of ships and service craft in custody of or titled by the United States Navy. It contains information on ships and service craft that make up the official inventory of the Navy from the time a vessel is authorized through its life cycle and...
on 14 April 1992. Her scrapping via the Nuclear-Powered Ship and Submarine Recycling Program at Puget Sound Naval Shipyard
Puget Sound Naval Shipyard
Puget Sound Naval Shipyard and Intermediate Maintenance Facility is a United States Navy shipyard covering 179 acres on Puget Sound at Bremerton, Washington...
at Bremerton
Bremerton, Washington
Bremerton is a city in Kitsap County, Washington, United States. The population was 38,790 at the 2011 State Estimate, making it the largest city on the Olympic Peninsula. Bremerton is home to Puget Sound Naval Shipyard and the Bremerton Annex of Naval Base Kitsap...
, Washington, began on 1 May 1992 and was completed on 7 April 1993.