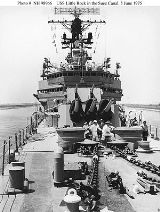 USS Little Rock (CL-92/CLG-4/CG-4) was one of 27 United States Navy
United States Navy
The United States Navy is the naval warfare service branch of the United States Armed Forces and one of the seven uniformed services of the United States. The U.S. Navy is the largest in the world; its battle fleet tonnage is greater than that of the next 13 largest navies combined. The U.S...
light cruiser
Light cruiser
A light cruiser is a type of small- or medium-sized warship. The term is a shortening of the phrase "light armored cruiser", describing a small ship that carried armor in the same way as an armored cruiser: a protective belt and deck...
s completed during or shortly after World War II
World War II
World War II, or the Second World War , was a global conflict lasting from 1939 to 1945, involving most of the world's nations—including all of the great powers—eventually forming two opposing military alliances: the Allies and the Axis...
, and one of six to be converted to guided missile cruisers. She was the first US Navy ship to be named for Little Rock, Arkansas. Commissioned in mid-1945, she was completed too late to see combat duty during World War II. After an initial South American cruise, she spent the next few years serving off the east coast of the U.S., in the Caribbean, and in the Mediterranean. Like all but one of her sister ships, she was retired in the post-war defense cutbacks, becoming part of the Atlantic Reserve Fleet in 1949.

In the late 1950s she was converted to a guided missile cruiser, which involved removing all her aft guns and rebuilding her aft superstructure to accommodate the Talos
Talos
In Greek mythology, Talos or Talon was a giant man of bronze who protected Europa in Crete from pirates and invaders by circling the island's shores three times daily while guarding it.- History :...
missile system. Like most of the Cleveland ships converted to missile ships, she was also extensively modified forward to become a flagship
Flagship
A flagship is a vessel used by the commanding officer of a group of naval ships, reflecting the custom of its commander, characteristically a flag officer, flying a distinguishing flag...
. This involved removal of most of her forward armament to allow for a greatly enlarged superstructure. She was recommissioned in 1960 as CLG-4 (and in 1975 redesignated CG-4).

In her new career she served extensively in the Mediterranean, often as the Sixth Fleet
Sixth Fleet
Sixth Fleet or 6th fleet may mean:* United States Sixth Fleet* IJN 6th Fleet, Imperial Japanese Navy* Luftflotte 6-See also:* Fifth * Fleet * Fifth Fleet * Seventh Fleet...
flagship. She decommissioned for the last time in 1975, and is now a museum ship
Museum ship
A museum ship, or sometimes memorial ship, is a ship that has been preserved and converted into a museum open to the public, for educational or memorial purposes...
in Buffalo, New York
Buffalo, New York
Buffalo is the second most populous city in the state of New York, after New York City. Located in Western New York on the eastern shores of Lake Erie and at the head of the Niagara River across from Fort Erie, Ontario, Buffalo is the seat of Erie County and the principal city of the...
.

Little Rock is the sole surviving member of the Cleveland class.

After shakedown
Shakedown
Shakedown may refer to:* Shakedown , a type of plastic deformation* Shakedown or a shakedown cruise, a period of testing undergone by a ship, airplane or other craft...
off Cuba and training along the Atlantic coast, Little Rock departed Newport, R.I., 21 October for South America. Following this five-month cruise to Latin countries, the cruiser returned Norfolk 23 March 1946. For the next two months she performed exercises off the east coast and in the Caribbean, before sailing for Europe 4 June. After operating with the 6th Fleet throughout the summer. Little Rock returned Norfolk 27 September 1946.

From September 1946 to 1949, the cruiser performed east coast exercises; operated in the Caribbean on training maneuvers; and sailed to the Mediterranean during 1947 and 1948. Little Rock decommissioned 24 June 1949 and joined the Atlantic Reserve Fleet at New York.

Reclassified CLG-4 on 23 May 1957, Little Rock began a major conversion to a guided missile light cruiser of the . This refit included replacing the after six-inch turrets with a Talos missile
RIM-8 Talos
The Bendix RIM-8 Talos was a long-range naval surface-to-air missile, and was among the earliest surface-to-air missiles to equip United States Navy ships. The Talos used radar beam riding for guidance to the vicinity of its target, and semiactive radar homing for terminal guidance...
battery. She recommissioned at Philadelphia 3 June 1960, Capt. J. O. Phillips in command. The cruiser performed shakedown training in the Caribbean, test-firing her Talos missiles to prepare to join the Navy's rapidly expanding fleet of ships armed with guided missiles capable of delivering a nuclear weapon.

Departing Philadelphia 9 February 1961, Little Rock sailed for her first European cruise in her new role. After six months operating with the 6th Fleet and NATO units, the guided-missile cruiser returned to Norfolk during September.

While operating in the Caribbean, 18 November 1961, Little Rock was ordered to the waters off Santo Domingo
Santo Domingo
Santo Domingo, known officially as Santo Domingo de Guzmán, is the capital and largest city in the Dominican Republic. Its metropolitan population was 2,084,852 in 2003, and estimated at 3,294,385 in 2010. The city is located on the Caribbean Sea, at the mouth of the Ozama River...
to provide an element of stability during the uncertainty and unrest which plagued that country as rival factions vied to fill the political vacuum created by the assassination of Rafael Trujillo.

For the next four years Little Rock annually sailed to the Mediterranean, joining the 6th Fleet. She relieved , as Sixth Fleet flagship from May to December 1963 as she maintained the peace in southern Europe and the Middle East. During the months between deployments to the Mediterranean, she operated off the east coast, in the Caribbean, and off northern Europe with units of NATO countries. Remaining on the east coast during 1966 for overhaul and refresher training. In 1967 she relieved the USS Springfield as the Sixth fleet flagship at Rota Spain and proceeded to her new home port at Gaeta Italy. While away from Gaeta, she participated in exercises in the Mediterranean and carried the admiral to foreign ports. In 1967 the six day war broke out and she steamed to the eastern Mediterranean as command ship for NATO vessels in the area. When the was attacked by Israeli forces Little Rock went to her aid and was the second ship to arrive. She provided zone security and medical assistance to injured crew members of Liberty. During an exercise in mid-1970, she collided with a Greek destroyer, damaging her bow. The bow was temporarily repaired at Malta
Malta
Malta , officially known as the Republic of Malta , is a Southern European country consisting of an archipelago situated in the centre of the Mediterranean, south of Sicily, east of Tunisia and north of Libya, with Gibraltar to the west and Alexandria to the east.Malta covers just over in...
. In September, she returned to the United States and underwent a major yard overall in the Boston Naval Shipyard from November 1970 to the Spring of 1971. After refresher training, she returned to duty as flagship of the Sixth Fleet.

On 5 June 1975 Little Rock participated in the ceremonies marking the reopening of the Suez Canal
Suez Canal
The Suez Canal , also known by the nickname "The Highway to India", is an artificial sea-level waterway in Egypt, connecting the Mediterranean Sea and the Red Sea. Opened in November 1869 after 10 years of construction work, it allows water transportation between Europe and Asia without navigation...
. Third in line in the parade of ships she transited the Northern part of the Canal from Port Said
Port Said
Port Said is a city that lies in north east Egypt extending about 30 km along the coast of the Mediterranean Sea, north of the Suez Canal, with an approximate population of 603,787...
to Ismaïlia
Ismaïlia
-Notable natives:*Osman Ahmed Osman, a famous and influential Egyptian engineer, contractor, entrepreneur, and politician, was born in this town on 6 April 1917....
and demonstrated the new U.S. commitment to Egypt and Middle East peace. After the transit, Little Rock participated in a port visit to Alexandria
Alexandria
Alexandria is the second-largest city of Egypt, with a population of 4.1 million, extending about along the coast of the Mediterranean Sea in the north central part of the country; it is also the largest city lying directly on the Mediterranean coast. It is Egypt's largest seaport, serving...
, Egypt. Leaving Alexandria she crossed the Mediterranean and visited Dubrovnik
Dubrovnik
Dubrovnik is a Croatian city on the Adriatic Sea coast, positioned at the terminal end of the Isthmus of Dubrovnik. It is one of the most prominent tourist destinations on the Adriatic, a seaport and the centre of Dubrovnik-Neretva county. Its total population is 42,641...
, Yugoslavia, which was then a communist country.
Shortly after this the Talos SAM system was deactivated, and while plans were made for an extensive overhaul, modernization, and new weapons fit, a boiler room casualty (while the ship was steaming in the MED) revealed the ship's propulsion system was in dire material condition. Repairs were made allowing the ship to transit back to Norfolk, VA, and the ship was prepared for decommissioning in the spring of 1976.

After her decommissioning, Little Rock was taken to Buffalo, New York, where she is open to public touring at the Buffalo Naval & Military Park.