USS Billfish (SSN-676), a Sturgeon-class
Sturgeon class submarine
The Sturgeon class were a class of nuclear-powered fast attack submarines in service with the United States Navy from the 1960s until 2004. They were the "work horses" of the submarine attack fleet throughout much of the Cold War...
attack submarine, was the second ship of the United States Navy
United States Navy
The United States Navy is the naval warfare service branch of the United States Armed Forces and one of the seven uniformed services of the United States. The U.S. Navy is the largest in the world; its battle fleet tonnage is greater than that of the next 13 largest navies combined. The U.S...
to be named for the billfish
Billfish
The term billfish is applied to a number of different large, predatory fish characterised by their large size and their long, sword-like bill. Billfish include the sailfish and marlin, which make up the family Istiophoridae, and the swordfish, sole member of the family Xiphiidae...
, a name used for any fish, such as gar
Gar
In American English the name gar is strictly applied to members of the Lepisosteidae, a family including seven living species of fish in two genera that inhabit fresh, brackish, and occasionally marine, waters of eastern North America, Central America, and the Caribbean islands.-Etymology:In...
or spearfish
Spearfish
Spearfish may refer to:In geography:*Spearfish, South Dakota, United States*North Spearfish, South Dakota, United StatesIn biology:* Marlin, or Spearfish, a fish with an elongated body, a spear-like snout or billIn military:...
, with bill-shaped jaws.

The contract to build Billfish was awarded to the Electric Boat
Electric boat
While a significant majority of water vessels are powered by diesel engines, with sail power and gasoline engines also remaining popular, boats powered by electricity have been used for over 120 years. Electric boats were very popular from the 1880s until the 1920s, when the internal combustion...
Division of General Dynamics
General Dynamics
General Dynamics Corporation is a U.S. defense conglomerate formed by mergers and divestitures, and as of 2008 it is the fifth largest defense contractor in the world. Its headquarters are in West Falls Church , unincorporated Fairfax County, Virginia, in the Falls Church area.The company has...
Corporation in Groton
Groton, Connecticut
Groton is a town located on the Thames River in New London County, Connecticut, United States. The population was 39,907 at the 2000 census....
, Connecticut
Connecticut
Connecticut is a state in the New England region of the northeastern United States. It is bordered by Rhode Island to the east, Massachusetts to the north, and the state of New York to the west and the south .Connecticut is named for the Connecticut River, the major U.S. river that approximately...
, on 15 July 1966 and her keel was laid down on 20 September 1968. She was launched
Ship naming and launching
The ceremonies involved in naming and launching naval ships are based in traditions thousands of years old.-Methods of launch:There are three principal methods of conveying a new ship from building site to water, only two of which are called "launching." The oldest, most familiar, and most widely...
on 1 May 1970 sponsored by Mrs. Earle G. Wheeler, the wife of Chairman of the Joint Chiefs of Staff
Chairman of the Joint Chiefs of Staff
The Chairman of the Joint Chiefs of Staff is by law the highest ranking military officer in the United States Armed Forces, and is the principal military adviser to the President of the United States, the National Security Council, the Homeland Security Council and the Secretary of Defense...
General
General (United States)
In the United States Army, United States Air Force, and United States Marine Corps, general is a four-star general officer rank, with the pay grade of O-10. General ranks above lieutenant general and below General of the Army or General of the Air Force; the Marine Corps does not have an...
Earle G. Wheeler (1908–1975), and commissioned
Ship commissioning
Ship commissioning is the act or ceremony of placing a ship in active service, and may be regarded as a particular application of the general concepts and practices of project commissioning. The term is most commonly applied to the placing of a warship in active duty with its country's military...
on 12 March 1971 with Commander
Commander
Commander is a naval rank which is also sometimes used as a military title depending on the individual customs of a given military service. Commander is also used as a rank or title in some organizations outside of the armed forces, particularly in police and law enforcement.-Commander as a naval...
Richard M. Hughes in command.

Billfish was decommissioned
Ship decommissioning
To decommission a ship is to terminate her career in service in the armed forces of her nation. A somber occasion, it has little of the elaborate ceremony of ship commissioning, but carries significant tradition....
on 1 July 1999 and stricken from the Naval Vessel Register
Naval Vessel Register
The Naval Vessel Register is the official inventory of ships and service craft in custody of or titled by the United States Navy. It contains information on ships and service craft that make up the official inventory of the Navy from the time a vessel is authorized through its life cycle and...
the same day. Her scrapping via the Nuclear-Powered Ship and Submarine Recycling Program at Puget Sound Naval Shipyard
Puget Sound Naval Shipyard
Puget Sound Naval Shipyard and Intermediate Maintenance Facility is a United States Navy shipyard covering 179 acres on Puget Sound at Bremerton, Washington...
in Bremerton
Bremerton, Washington
Bremerton is a city in Kitsap County, Washington, United States. The population was 38,790 at the 2011 State Estimate, making it the largest city on the Olympic Peninsula. Bremerton is home to Puget Sound Naval Shipyard and the Bremerton Annex of Naval Base Kitsap...
, Washington, was completed on 26 April 2000. 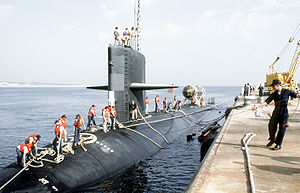