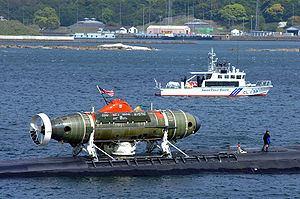 Russia
Russia
Russia or , officially known as both Russia and the Russian Federation , is a country in northern Eurasia. It is a federal semi-presidential republic, comprising 83 federal subjects...
is believed to have one vessel of the Bester class and five of the Priz class
Priz class
The Priz class is a type of Deep Submergence Rescue Vehicle operated by the government of Russia. There are known to be at least five vessels of the class, several of which were involved in the failed rescue attempt when the Kursk sank on 12 August 2000...
, which was involved in the failed attempt to rescue the crew of the Kursk
Russian submarine K-141 Kursk
K-141 Kursk was an Oscar-II class nuclear-powered cruise missile submarine of the Russian Navy, lost with all hands when it sank in the Barents Sea on August 12, 2000...
.

The United Kingdom
United Kingdom
The United Kingdom of Great Britain and Northern IrelandIn the United Kingdom and Dependencies, other languages have been officially recognised as legitimate autochthonous languages under the European Charter for Regional or Minority Languages...
operates the LR5
LR5
The LR5 is a manned submersible which was used by the British Royal Navy until 2009 when it was leased to support the Royal Australian Navy. It is designed for retrieving sailors from stranded submarines and is capable of rescuing 16 at a time....
submersible in a submarine rescue role. It previously operated the Slingsby Engineering built LR3.

The mode of deployment for these United States
United States
The United States of America is a federal constitutional republic comprising fifty states and a federal district...
submersibles is: fly the vehicle to the port closest to the incident; attach the vehicle to a host submarine
Submarine
A submarine is a watercraft capable of independent operation below the surface of the water. It differs from a submersible, which has more limited underwater capability...
; the host submarine travels to the incident site; rescue. The DSRVs were originally designed to work with USS Pigeon
USS Pigeon (ASR-21)
The third USS Pigeon was the lead ship of her class of submarine rescue ships. Laid down on 17 July 1968 by the Alabama Dry Dock and Shipbuilding Co., Mobile, Alabama, the ship was launched on 13 August 1969, sponsored by Mrs. Allen M. Shinn, wife of Vice Admiral Shinn, Commander Naval Air Force,...
and USS Ortolan
USS Ortolan (ASR-22)
USS Ortolan , a twin-hulled submarine rescue ship, was laid down 28 August 1968 by the Alabama Drydock and Shipbuilding Company, Mobile, Alabama; launched 10 September 1969; sponsored by Mrs. Nels C...
, but those two vessels have since been decommissioned and replaced by the Submarine Rescue Diving Recompression System
Submarine Rescue Diving Recompression System
The Submarine Rescue Diving Recompression System is a remotely operated underwater vehicle and its associated systems intended to replace the Mystic class deep submergence rescue vehicle for the United States Navy...
.

The Deep Submergence Rescue Vehicle (DSRV) is designed to rescue 24 people at a time at depths of up to 2000 ft. Their maximum operating depth is 5000 ft. Power is provided by 2 large batteries, one fore, and one aft that power the electrical, hydraulic and life support systems. The DSRV uses mercury in a completely sealed system to allow themselves to match any angle (up to 45°) in both pitch and roll so as to "mate" (attach) to a downed submarine that may be at an angle on the sea floor. The DSRV is capable of being transported by Air Force C-5 to anywhere in the world within 24 hours.
It is then loaded onto a "Mother Submarine" (MOSUB).

The MOSUB then carries the DSRV to the rescue site where several trips are made to rescue all personnel.

Rescue is usually accomplished by ferrying rescuees from the stranded sub to the MOSUB, however, they can also be taken to a properly equipped surface support ship.

In addition to a number of U.S. Navy submarines being outfitted for MOSUB capabilities, several NATO countries also have submarines outfitted to carry the U.S. Navy DSRV for rescue capability as needed. Both the UK and French Navies have such submarines.

The interior of the DSRV is composed of 3 spheres. The forward sphere is the "Control Sphere" where the DSRV's pilot and copilot operate the vehicle. The two aft spheres (known as Mid Sphere and Aft Sphere) are used to seat the rescuees or to install equipment for additional operations. Maneuvering is accomplished using 4 thrusters and one main propeller.