Types Ib and Ic supernovae are categories of stellar explosions that are caused by the core collapse of massive star
Star
A star is a massive, luminous sphere of plasma held together by gravity. At the end of its lifetime, a star can also contain a proportion of degenerate matter. The nearest star to Earth is the Sun, which is the source of most of the energy on Earth...
s. These stars have shed (or been stripped of) their outer envelope of hydrogen
Hydrogen
Hydrogen is the chemical element with atomic number 1. It is represented by the symbol H. With an average atomic weight of , hydrogen is the lightest and most abundant chemical element, constituting roughly 75% of the Universe's chemical elemental mass. Stars in the main sequence are mainly...
, and, when compared to the spectrum of Type Ia supernova
Type Ia supernova
A Type Ia supernova is a sub-category of supernovae, which in turn are a sub-category of cataclysmic variable stars, that results from the violent explosion of a white dwarf star. A white dwarf is the remnant of a star that has completed its normal life cycle and has ceased nuclear fusion...
e, they lack the absorption line of silicon. Compared to Type Ib, Type Ic supernovae are hypothesized to have lost more of their initial envelope, including most of their helium. The two types are usually referred to as stripped core-collapse supernovae.

When a supernova
Supernova
A supernova is a stellar explosion that is more energetic than a nova. It is pronounced with the plural supernovae or supernovas. Supernovae are extremely luminous and cause a burst of radiation that often briefly outshines an entire galaxy, before fading from view over several weeks or months...
is observed, it can be categorized in the Minkowski
Rudolph Minkowski
Rudolph Minkowski was a German-American astronomer. His father was the physiologist Oskar Minkowski and his uncle was Hermann Minkowski....
–Zwicky
Fritz Zwicky
Fritz Zwicky was a Swiss astronomer. He worked most of his life at the California Institute of Technology in the United States of America, where he made many important contributions in theoretical and observational astronomy.- Biography :Fritz Zwicky was born in Varna, Bulgaria to a Swiss father....
supernova classification scheme based upon the absorption lines that appear in its spectrum
Spectrum
A spectrum is a condition that is not limited to a specific set of values but can vary infinitely within a continuum. The word saw its first scientific use within the field of optics to describe the rainbow of colors in visible light when separated using a prism; it has since been applied by...
. A supernova is first categorized as either a Type I or Type II, then sub-categorized based on more specific traits. Supernovae belonging to the general category Type I lack hydrogen
Hydrogen
Hydrogen is the chemical element with atomic number 1. It is represented by the symbol H. With an average atomic weight of , hydrogen is the lightest and most abundant chemical element, constituting roughly 75% of the Universe's chemical elemental mass. Stars in the main sequence are mainly...
lines in their spectra; in contrast to Type II supernovae which do display lines of hydrogen. The Type I category is sub-divided into Type Ia, Type Ib and Type Ic supernovae.

Type Ib/Ic supernovae are distinguished from Type Ia
Type Ia supernova
A Type Ia supernova is a sub-category of supernovae, which in turn are a sub-category of cataclysmic variable stars, that results from the violent explosion of a white dwarf star. A white dwarf is the remnant of a star that has completed its normal life cycle and has ceased nuclear fusion...
by the lack of an absorption line of singly ionized silicon
Silicon
Silicon is a chemical element with the symbol Si and atomic number 14. A tetravalent metalloid, it is less reactive than its chemical analog carbon, the nonmetal directly above it in the periodic table, but more reactive than germanium, the metalloid directly below it in the table...
at a wavelength
Wavelength
In physics, the wavelength of a sinusoidal wave is the spatial period of the wave—the distance over which the wave's shape repeats.It is usually determined by considering the distance between consecutive corresponding points of the same phase, such as crests, troughs, or zero crossings, and is a...
of 635.5 nanometre
Nanometre
A nanometre is a unit of length in the metric system, equal to one billionth of a metre. The name combines the SI prefix nano- with the parent unit name metre .The nanometre is often used to express dimensions on the atomic scale: the diameter...
s. As Type Ib/Ic supernovae age, they also display lines from elements such as oxygen
Oxygen
Oxygen is the element with atomic number 8 and represented by the symbol O. Its name derives from the Greek roots ὀξύς and -γενής , because at the time of naming, it was mistakenly thought that all acids required oxygen in their composition...
, calcium
Calcium
Calcium is the chemical element with the symbol Ca and atomic number 20. It has an atomic mass of 40.078 amu. Calcium is a soft gray alkaline earth metal, and is the fifth-most-abundant element by mass in the Earth's crust...
and magnesium
Magnesium
Magnesium is a chemical element with the symbol Mg, atomic number 12, and common oxidation number +2. It is an alkaline earth metal and the eighth most abundant element in the Earth's crust and ninth in the known universe as a whole...
. In contrast, Type Ia spectra become dominated by lines of iron
Iron
Iron is a chemical element with the symbol Fe and atomic number 26. It is a metal in the first transition series. It is the most common element forming the planet Earth as a whole, forming much of Earth's outer and inner core. It is the fourth most common element in the Earth's crust...
. Type Ic supernovae are distinguished from Type Ib in that the former also lack lines of helium at 587.6 nm. 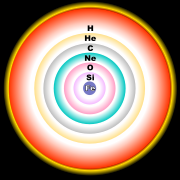 Prior to becoming a supernova, an evolved massive star is organized in the manner of an onion, with layers of different elements undergoing fusion. The outermost layer consists of hydrogen, followed by helium, carbon, oxygen, and so forth. Thus when the outer envelope of hydrogen is shed, this exposes the next layer that consists primarily of helium (mixed with other elements). This can occur when a very hot, massive star reaches a point in its evolution when significant mass loss is occurring from its stellar wind. Highly massive stars (with 25 or more times the mass of the Sun
Sun
The Sun is the star at the center of the Solar System. It is almost perfectly spherical and consists of hot plasma interwoven with magnetic fields...
) can lose up to 10−5 solar mass
Solar mass
The solar mass , , is a standard unit of mass in astronomy, used to indicate the masses of other stars and galaxies...
es each year—the equivalent of a solar mass every 100,000 years.

Type Ib and Ic supernovae are hypothesized to have been produced by core collapse of massive stars that have lost their outer layer of hydrogen and helium, either via winds or mass transfer to a companion. The progenitors of Types Ib and Ic have lost most of their outer envelopes due to strong stellar wind
Stellar wind
A stellar wind is a flow of neutral or charged gas ejected from the upper atmosphere of a star. It is distinguished from the bipolar outflows characteristic of young stars by being less collimated, although stellar winds are not generally spherically symmetric.Different types of stars have...
s or else from interaction with a close companion of about 3–4 solar masses. Rapid mass loss can occur in the case a Wolf-Rayet star
Wolf-Rayet star
Wolf–Rayet stars are evolved, massive stars , which are losing mass rapidly by means of a very strong stellar wind, with speeds up to 2000 km/s...
, and these massive objects show a spectrum that is lacking in hydrogen. Type Ib progenitors have ejected most of the hydrogen in their outer atmospheres, while Type Ic progenitors have lost both the hydrogen and helium shells; in other words, Type Ic have lost more of their envelope (i.e., much of the helium layer) than the progenitors of Type Ib. In other respects, however, the underlying mechanism behind Type Ib and Ic supernovae is similar to that of a Type II supernova, thus placing Type Ib/c between Type Ia and Type II. Because of their similarity, Type Ib and Ic supernovae are sometimes collectively called Type Ibc supernovae.

There is some evidence that a small percent of the Type Ic supernovae may be the progenitors of gamma ray bursts (GRB), though it is also hypothesized that any hydrogen-stripped Type Ib or Ic supernova could be a GRB, dependent upon the geometry of the explosion. In any case, astronomers believe that most Type Ib, and probably Type Ic as well, result from core collapse in stripped, massive stars, rather than from the thermonuclear runaway of white dwarf
White dwarf
A white dwarf, also called a degenerate dwarf, is a small star composed mostly of electron-degenerate matter. They are very dense; a white dwarf's mass is comparable to that of the Sun and its volume is comparable to that of the Earth. Its faint luminosity comes from the emission of stored...
s.

As they are formed from rare, very massive stars, the rate of Type Ib and Ic supernovae occurrence is much lower than the corresponding rate for Type II supernovae. They normally occur in regions of new star formation, and have never been observed in an elliptical galaxy
Elliptical galaxy
An elliptical galaxy is a galaxy having an approximately ellipsoidal shape and a smooth, nearly featureless brightness profile. They range in shape from nearly spherical to highly flat and in size from hundreds of millions to over one trillion stars...
. Because they share a similar operating mechanism, Type Ib/c and the various Type II supernovae are collectively called core-collapse supernovae. In particular, Type Ib/c may be referred to as stripped core-collapse supernovae.

The light curve
Light curve
In astronomy, a light curve is a graph of light intensity of a celestial object or region, as a function of time. The light is usually in a particular frequency interval or band...
s (a plot of luminosity versus time) of Type Ib supernovae vary in form, but in some cases can be nearly identical to those of Type Ia supernovae. However, Type Ib light curves may peak at lower luminosity and may be redder. In the infrared
Infrared
Infrared light is electromagnetic radiation with a wavelength longer than that of visible light, measured from the nominal edge of visible red light at 0.74 micrometres , and extending conventionally to 300 µm...
portion of the spectrum, the light curve of a Type Ib supernova is similar to a Type II-L light curve. (See Supernova
Supernova
A supernova is a stellar explosion that is more energetic than a nova. It is pronounced with the plural supernovae or supernovas. Supernovae are extremely luminous and cause a burst of radiation that often briefly outshines an entire galaxy, before fading from view over several weeks or months...
.) Type Ib supernovae usually have slower decline rates for the spectral curves than Ic.

Type Ia supernovae light curves are useful for measuring distances on a cosmological scale. That is, they serve as standard candles. However, due to the similarity of the spectra of Type Ib and Ic supernovae, the latter can form a source of contamination of supernova surveys and must be carefully removed from the observed samples before making distance estimates.
The source of this article is wikipedia, the free encyclopedia.  The text of this article is licensed under the GFDL.