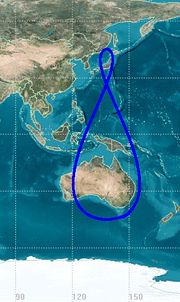 Tundra orbit is a type of highly elliptical
Highly Elliptical Orbit
A highly elliptical orbit is an elliptic orbit with a low-altitude perigee and a high-altitude apogee. It is a type of high Earth orbit....
geosynchronous orbit
Geosynchronous orbit
A geosynchronous orbit is an orbit around the Earth with an orbital period that matches the Earth's sidereal rotation period...
with a high inclination
Inclination
Inclination in general is the angle between a reference plane and another plane or axis of direction.-Orbits:The inclination is one of the six orbital parameters describing the shape and orientation of a celestial orbit...
(usually near 63.4°) and an orbital period
Orbital period
The orbital period is the time taken for a given object to make one complete orbit about another object.When mentioned without further qualification in astronomy this refers to the sidereal period of an astronomical object, which is calculated with respect to the stars.There are several kinds of...
of one sidereal day (almost 24 hour
Hour
The hour is a unit of measurement of time. In modern usage, an hour comprises 60 minutes, or 3,600 seconds...
s). A satellite placed in this orbit spends most of its time over a chosen area of the Earth
Earth
Earth is the third planet from the Sun, and the densest and fifth-largest of the eight planets in the Solar System. It is also the largest of the Solar System's four terrestrial planets...
, a phenomenon known as apogee
Apsis
An apsis , plural apsides , is the point of greatest or least distance of a body from one of the foci of its elliptical orbit. In modern celestial mechanics this focus is also the center of attraction, which is usually the center of mass of the system...
dwell. The ground track
Ground track
A ground track or ground trace is the path on the surface of the Earth directly below an aircraft or satellite. In the case of a satellite, it is the projection of the satellite's orbit onto the surface of the Earth .A satellite ground track may be thought of as a path along the Earth's surface...
of a satellite in a tundra orbit is a closed "figure-eight" lemniscate
Lemniscate
In algebraic geometry, a lemniscate refers to any of several figure-eight or ∞ shaped curves. It may refer to:*The lemniscate of Bernoulli, often simply called the lemniscate, the locus of points whose product of distances from two foci equals the square of half the interfocal distance*The...
.

These are conceptually similar to Molniya orbit
Molniya orbit
Molniya orbit is a type of highly elliptical orbit with an inclination of 63.4 degrees, an argument of perigee of -90 degree and an orbital period of one half of a sidereal day...
s which have the same inclination but half the period (about 12 hours). The only current user of tundra
Tundra
In physical geography, tundra is a biome where the tree growth is hindered by low temperatures and short growing seasons. The term tundra comes through Russian тундра from the Kildin Sami word tūndâr "uplands," "treeless mountain tract." There are three types of tundra: Arctic tundra, alpine...
orbits is Sirius Satellite Radio
Sirius Satellite Radio
Sirius Satellite Radio is a satellite radio service operating in North America, owned by Sirius XM Radio.Headquartered in New York City, with smaller studios in Los Angeles and Memphis, Sirius was officially launched on July 1, 2002 and currently provides 69 streams of music and 65 streams of...
, which operates a constellation
Satellite constellation
A group of artificial satellites working in concert is known as a satellite constellation. Such a constellation can be considered to be a number of satellites with coordinated ground coverage, operating together under shared control, synchronised so that they overlap well in coverage and...
of three satellite
Satellite
In the context of spaceflight, a satellite is an object which has been placed into orbit by human endeavour. Such objects are sometimes called artificial satellites to distinguish them from natural satellites such as the Moon....
s. The RAAN
Longitude of the ascending node
The longitude of the ascending node is one of the orbital elements used to specify the orbit of an object in space. It is the angle from a reference direction, called the origin of longitude, to the direction of the ascending node, measured in a reference plane...
and mean anomaly
Mean anomaly
In celestial mechanics, the mean anomaly is a parameter relating position and time for a body moving in a Kepler orbit. It is based on the fact that equal areas are swept at the focus in equal intervals of time....
of each satellite is offset by 120 degrees so that when one satellite moves out of position, another has passed perigee and is ready to take over.

Tundra and Molniya orbits are used to provide high latitude users with higher elevation
Elevation
The elevation of a geographic location is its height above a fixed reference point, most commonly a reference geoid, a mathematical model of the Earth's sea level as an equipotential gravitational surface ....
angles than a geostationary orbit. Neither the Tundra nor Molniya orbits are geostationary because that is possible only over the equator, so both orbits are elliptical to reduce the time that the satellite is away from its service area. An argument of perigee of 270 degrees places apogee at the northernmost point of the orbit. (An argument of perigee of 90 degrees would likewise serve the high southern latitudes. An argument of perigee of 0 or 180 degrees would cause the satellite to dwell over the equator, but there would be little point to this as this could be better done with a conventional geostationary orbit.)

The Tundra and Molniya orbits use a inclination to null the secular perturbation
Orbital perturbation analysis (spacecraft)
Isaac Newton in his Philosophiæ Naturalis Principia Mathematica demonstrated that the gravitational force between two mass points is inversely proportional to the square of the distance between the points and fully solved corresponding "two-body problem" demonstrating that radius vector between the...
of the argument of perigee caused by the Earth's equatorial bulge. With any other inclination than either 63.4 deg or 180 deg - 63.4 deg = 116.6 deg the argument of perigee would change steadily over time so that apogee would occur either before or after the highest latitude is reached.
The source of this article is wikipedia, the free encyclopedia.  The text of this article is licensed under the GFDL.