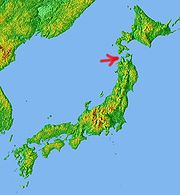 Japan's territorial waters extend to three nautical miles (5.6 km) into the strait instead of the usual twelve, reportedly to allow nuclear
Nuclear weapon
A nuclear weapon is an explosive device that derives its destructive force from nuclear reactions, either fission or a combination of fission and fusion. Both reactions release vast quantities of energy from relatively small amounts of matter. The first fission bomb test released the same amount...
-armed United States Navy
United States Navy
The United States Navy is the naval warfare service branch of the United States Armed Forces and one of the seven uniformed services of the United States. The U.S. Navy is the largest in the world; its battle fleet tonnage is greater than that of the next 13 largest navies combined. The U.S...
warships and submarines to transit the strait without violating Japan's prohibition against nuclear weapons in its territory.

The Tsugaru Strait has eastern and western necks, both approximately 20 km across with maximum depths of 200 and 140 m respectively.

In the past, the most common way for passengers and freight to cross the strait was on ferries, approximately a four-hour journey. Now the Seikan Tunnel
Seikan Tunnel
The Seikan Tunnel is a railway tunnel in Japan, with a long portion under the seabed. Track level is about below seabed and below sea level. It travels beneath the Tsugaru Strait—connecting Aomori Prefecture on the Japanese island of Honshu and the island of Hokkaido—as part of the Kaikyo Line...
provides a convenient but more expensive alternative and approximately halves the travel time in comparison to ferrying. When Shinkansen trains
Hokkaido Shinkansen
The is a high-speed rail line currently under construction between Aomori and Hokkaido through the Seikan Tunnel. Construction started in May 2005, and the initial Shin-Aomori to Shin-Hakodate section is projected to open in 2015. There are long-term plans to extend the line to Sapporo...
can traverse the tunnel to Hakodate (scheduled for 2015), the journey time will be cut to 50 minutes.

On September 26, 1954 1,172 lives were lost when the ferry Tōya Maru
Toya Maru
The was a Japanese train ferry constructed by the Japanese National Railways which sank during a typhoon in the Tsugaru Strait between the Japanese islands of Hokkaidō and Honshū on September 26, 1954. It is said that 1,153 people aboard were killed in the accident...
sank in the strait.

Thomas Blakiston
Thomas Blakiston
Thomas Wright Blakiston was an English explorer and naturalist.Born in Lymington, Hampshire, England, Blakiston was the son of Major John Blakiston, second son of Sir Matthew Blakiston, 2nd Baronet...
, an English explorer and naturalist, noticed that animals in Hokkaido were related to northern Asian species, whereas those on Honshu to the south were related to those from southern Asia. The Tsugaru Strait was therefore established as a major zoogeographical boundary, and became known as the "Blakiston Line".
The source of this article is wikipedia, the free encyclopedia.  The text of this article is licensed under the GFDL.