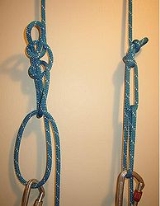 Encyclopedia
The trucker's hitch is a compound knot
Knot
A knot is a method of fastening or securing linear material such as rope by tying or interweaving. It may consist of a length of one or several segments of rope, string, webbing, twine, strap, or even chain interwoven such that the line can bind to itself or to some other object—the "load"...
commonly used for securing loads on truck
Truck
A truck or lorry is a motor vehicle designed to transport cargo. Trucks vary greatly in size, power, and configuration, with the smallest being mechanically similar to an automobile...
s or trailers
Trailer (vehicle)
A trailer is generally an unpowered vehicle pulled by a powered vehicle. Commonly, the term trailer refers to such vehicles used for transport of goods and materials....
. This general arrangement, using loops
Loop (knot)
In reference to knots, loop may refer to:* One of the fundamental structures used to tie knots. Specifically, it is a full circle formed by passing the working end over itself.* A type of knot used to create a closed circle in a line....
and turn
Turn (knot)
A turn is one round of rope on a pin or cleat, or one round of a coil. Turns can be made around various objects, through rings, or around the standing part of the rope itself or another rope. A turn also denotes a component of a knot....
s in the rope
Rope
A rope is a length of fibres, twisted or braided together to improve strength for pulling and connecting. It has tensile strength but is too flexible to provide compressive strength...
itself to form a crude block and tackle
Block and tackle
A block and tackle is a system of two or more pulleys with a rope or cable threaded between them, usually used to lift or pull heavy loads.The pulleys are assembled together to form blocks so that one is fixed and one moves with the load...
, has long been used to tension lines and is known by multiple names. Knot author Geoffrey Budworth claims the knot can be traced back to the days when carters and hawker
Hawker (trade)
A hawker is a vendor of merchandise that can be easily transported; the term is roughly synonymous with peddler or costermonger. In most places where the term is used, a hawker sells items or food that are native to the area...
s used horse-drawn conveyances to move their wares from place to place.

The portion of the trucker's hitch which differs in the following variations is the method used to form the loop which the working end slides through to produce the mechanical advantage
Mechanical advantage
Mechanical advantage is a measure of the force amplification achieved by using a tool, mechanical device or machine system. Ideally, the device preserves the input power and simply trades off forces against movement to obtain a desired amplification in the output force...
. The different methods of forming the loop affect the ease and speed of tying and releasing and the stability of the final product.

The variations are presented in order of increasing stability.

This version of the knot uses a sheepshank
Sheepshank
The sheepshank is a type of knot that is used to shorten a rope or take up slack. This knot is not stable. It will fall apart under too much load or too little load.The knot has several features which allow a rope to be shortened:...
-like construction, in this kind of application also known as a bell ringer's knot, to form the loop. It is quicker to make than a fixed loop, but is less dependable. It is avoided in critical applications (such as securing a load on a truck) as it can fall apart under too little load or too much load, and can capsize if not dressed properly. However, this knot may be made secure by adding a Half Hitch by using the top bight of the Sheepshank. This form of the trucker's hitch is least likely to jam, coming apart easily once tension is released. Different sources show slight variations in the way the sheepshank portion is formed and dressed.

The loop formed in this version is a simple Slipped Overhand Loop
Overhand knot with draw-loop
An overhand knot with draw-loop, is a knot in which the weight of the load the rope carries depresses the loop sufficiently to keep it in place until the load item is placed in its location...
or a variation using multiple turns of rope to form the eye of the loop. If extra loops are used to form the eye it tends to ease untying. In order to prevent the closing of the loop under load, the loop must be formed by the working end of the rope (which will later pass through the loop). If the standing end goes through the loop, it will close under load.

The most reliable common variation uses a fixed loop, such as an alpine butterfly loop, artillery loop
Artillery loop
The artillery loop or harness loop is a knot with a loop on the bight for non-critical purposes. The artillery loop must have the loop loaded or it will slip and contract easily. It is an inferior knot to the alpine butterfly knot, possibly dangerously so, in that it can be yanked out of shape...
, figure-eight loop, or another of many suitable loop knots. If a fixed loop is used repeatedly for tying the trucker's hitch in the same portion of rope, excessive wear or other damage may be suffered by the portion of the loop which working end slides against.

In tightening the trucker's hitch, tension can be effectively increased by repeatedly pulling sideways while preventing the tail end from slipping through the loop, and then cinching the knot tighter as the sideways force is released. This is called "sweating a line".

Once tight, the trucker's hitch is often secured with a half hitch
Half hitch
The half hitch is a simple overhand knot, where the working end of a line is brought over and under the standing part. Insecure on its own, it is a valuable component of a wide variety of useful and reliable hitches, bends, and knots....
, usually slipped for easy releasing and to avoid the necessity of access to the end of the rope, though a more secure finish, such as two half hitches, may be called for. Under large loads, the finishing half hitch can jam, especially if it is not slipped; the difficulty of releasing it can be compounded by the fact that the knot is typically still under tension when it is untied.

All common variations of the trucker's hitch use a loop in the standing part of the rope and the anchor point as make-shift pulley
Pulley
A pulley, also called a sheave or a drum, is a mechanism composed of a wheel on an axle or shaft that may have a groove between two flanges around its circumference. A rope, cable, belt, or chain usually runs over the wheel and inside the groove, if present...
s in order to theoretically obtain a 3 to 1 mechanical advantage while pulling on the working end.

There is sometimes confusion about how much theoretical mechanical advantage is provided by the trucker's hitch. If the trucker's hitch were to be used as in the pulley diagram at right, to lift a weight off the floor, the theoretical mechanical advantage would be only 2:1. However in the common use of the trucker's hitch, a static hook, ring, or rail, serves as the lower pulley, and the rope across the top of the load is the portion being tensioned. Thus, the standing part of the rope is represented by the top anchor point in the diagram, and the theoretical ratio is indeed 3:1 when the working end is tensioned. That is, in a frictionless system, every unit of force exerted on the working end would produce 3 units in the standing part of the rope over the load. In the typical use of the trucker's hitch, where it is used to tighten a rope over a load, when the end is secured to the loop of the Truckers hitch and let go, the tension in the two segments of rope around the ring will rise 50%, unless the rope slackens when it is being tied off, in which case the tension may drop to any value or even zero if enough slack is allowed. But when the trucker's hitch is used as in the diagram, after tying off, the load on the attachment point above the top pulley will drop to 400 lb and the tension in the two lines going to the lower pulley will not change.

Theoretical considerations aside, in real world use the mechanical advantage of the trucker's hitch is significantly less than the ideal case due to the effects of friction
Friction
Friction is the force resisting the relative motion of solid surfaces, fluid layers, and/or material elements sliding against each other. There are several types of friction:...
. Friction has been reported to reduce the mechanical advantage from 3 to 1, down to less than 1 to 1 in many cases. One advantage of the friction within the trucker's hitch, compared to a hypothetical pulley-based system, is that it allows the hitch to be held taut with less force while the working end is secured.