Encyclopedia
Tropicbirds are a family
Family (biology)
In biological classification, family is* a taxonomic rank. Other well-known ranks are life, domain, kingdom, phylum, class, order, genus, and species, with family fitting between order and genus. As for the other well-known ranks, there is the option of an immediately lower rank, indicated by the...
, Phaethontidae, of tropical pelagic seabird
Seabird
Seabirds are birds that have adapted to life within the marine environment. While seabirds vary greatly in lifestyle, behaviour and physiology, they often exhibit striking convergent evolution, as the same environmental problems and feeding niches have resulted in similar adaptations...
s now classified in their own order Phaethontiformes. Their relationship to other living birds is unclear, and they appear to have no close relatives. There are three species in one genus
Genus
In biology, a genus is a low-level taxonomic rank used in the biological classification of living and fossil organisms, which is an example of definition by genus and differentia...
, Phaethon. They have predominately white plumage
Plumage
Plumage refers both to the layer of feathers that cover a bird and the pattern, colour, and arrangement of those feathers. The pattern and colours of plumage vary between species and subspecies and can also vary between different age classes, sexes, and season. Within species there can also be a...
with elongated tail feathers and small feeble legs and feet.

Tropicbirds range in size from 76 cm to 102 cm in length and 94 cm to 112 cm in wingspan. Their plumage is predominantly white, with elongated central tail feathers. The three species have different combinations of black markings on the face, back, and wings. Their bills are large, powerful and slightly decurved. Their heads are large and their necks are short and thick. They have totipalmate feet (that is, all four toes are connected by a web). The legs of a tropicbird are located far back on their body, making walking impossible, so that they can only move on land by pushing themselves forward with their feet.

The tropicbirds' call is typically a loud, piercing, shrill, but grating whistle, or crackle. These are often given in a rapid series when they are in a display flight at the colony.

Tropicbirds were traditionally grouped in the order
Order (biology)
In scientific classification used in biology, the order is# a taxonomic rank used in the classification of organisms. Other well-known ranks are life, domain, kingdom, phylum, class, family, genus, and species, with order fitting in between class and family...
Pelecaniformes
Pelecaniformes
The Pelecaniformes is a order of medium-sized and large waterbirds found worldwide. As traditionally—but erroneously—defined, they encompass all birds that have feet with all four toes webbed. Hence, they were formerly also known by such names as totipalmates or steganopodes...
, which contained the pelican
Pelican
A pelican, derived from the Greek word πελεκυς pelekys is a large water bird with a large throat pouch, belonging to the bird family Pelecanidae....
s, cormorants and shags
Cormorant
The bird family Phalacrocoracidae is represented by some 40 species of cormorants and shags. Several different classifications of the family have been proposed recently, and the number of genera is disputed.- Names :...
, darters, gannets and boobies
Sulidae
The bird family Sulidae comprises the gannets and boobies. Collectively called sulidas, they are medium-large coastal seabirds that plunge-dive for fish and similar prey. The ten species in this family are often considered congeneric in older sources, placing all in the genus Sula...
and frigatebirds; in the Sibley-Ahlquist taxonomy
Sibley-Ahlquist taxonomy
The Sibley-Ahlquist taxonomy is a bird taxonomy proposed by Charles Sibley and Jon Edward Ahlquist. It is based on DNA-DNA hybridization studies conducted in the late 1970s and throughout the 1980s....
, the Pelecaniformes were united with other groups into a large "Ciconiiformes". More recently this grouping has been found to be massively paraphyletic (missing closer relatives of its distantly related groups) and split again.

Recent research suggests that the Pelecaniformes as traditionally defined are paraphyletic too. The tropicbirds and the related prehistoric family Prophaethontidae are considered a distinct order, Phaethontiformes, not closely related to any other living birds. They are more distantly related to the Procellariiformes
Procellariiformes
Procellariiformes is an order of seabirds that comprises four families: the albatrosses, petrels and shearwaters, storm petrels, and diving petrels...
(Mayr, 2003; Bourdon et al., 2005). 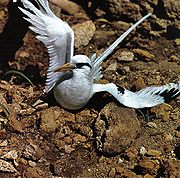 Within the group, the Red-tailed and White tailed are each other's closest relatives, with the red-billed a sister taxon of that group.

Heliadornis is a prehistoric genus of tropicbirds described from fossil
Fossil
Fossils are the preserved remains or traces of animals , plants, and other organisms from the remote past...
s.

Tropicbirds frequently catch their prey by hovering and then plunge-diving, typically only into the surface-layer of the waters. They eat mostly fish, especially flying fish, and occasionally squid. Tropicbirds tend to avoid multi-species feeding flocks, unlike the frigatebirds, which have similar diets.

Tropicbirds are usually solitary or in pairs away from breeding colonies. There they engage in spectacular courtship displays. For several minutes, groups of 2–20 birds simultaneously and repeatedly fly around one another in large, vertical circles, while swinging the tail streamers from side to side. If the female likes the presentation, she will mate with the male in his prospective nest-site. Occasionally, disputes will occur between males trying to protect their mates and nesting areas.

Tropicbirds generally nest in holes or crevices on the bare ground. The female lays one white egg, spotted brown, and incubates for 40–46 days. The incubation is performed by both parents, but mostly the female, while the male brings food to feed the female. The chick hatches with grey down. It will stay alone in the nest while both parents search for food, and they will feed the chick twice every three days until fledging, about 12–13 weeks after hatching. The young are not able to fly initially; they will float on the ocean for several days to lose weight before flight.

Tropicbird chicks have slower growth than nearshore birds, and they tend to accumulate fat deposits while young. That, along with one-egg clutches, appears to be an adaptation to a pelagic lifestyle where food is often gathered in big amounts, but may be hard to find.