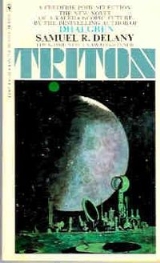 Encyclopedia
Trouble on Triton: An Ambiguous Heterotopia (1976) is a science fiction
Science fiction
Science fiction is a genre of fiction dealing with imaginary but more or less plausible content such as future settings, futuristic science and technology, space travel, aliens, and paranormal abilities...
novel
Novel
A novel is a book of long narrative in literary prose. The genre has historical roots both in the fields of the medieval and early modern romance and in the tradition of the novella. The latter supplied the present generic term in the late 18th century....
by Samuel R. Delany
Samuel R. Delany
Samuel Ray Delany, Jr., also known as "Chip" is an American author, professor and literary critic. His work includes a number of novels, many in the science fiction genre, as well as memoir, criticism, and essays on sexuality and society.His science fiction novels include Babel-17, The Einstein...
. It was nominated for the 1976 Nebula Award
Nebula Award
The Nebula Award is given each year by the Science Fiction and Fantasy Writers of America , for the best science fiction/fantasy fiction published in the United States during the previous year...
for Best Novel
Nebula Award for Best Novel
Winners of the Nebula Award for Best Novel, awarded by the Science Fiction and Fantasy Writers of America. The stated year is that of publication; awards are given in the following year.- Winners and other nominees :...
, and was shortlisted for a retrospective James Tiptree, Jr. Award
James Tiptree, Jr. Award
The James Tiptree, Jr. Award is an annual literary prize for works of science fiction or fantasy that expand or explore one's understanding of gender. It was initiated in February of 1991 by science fiction authors Pat Murphy and Karen Joy Fowler, subsequent to a discussion at WisCon.- Background...
in 1995. It was originally published under the shorter title Triton.

Delany has said that Trouble on Triton was written partly in dialogue with Ursula K. Le Guin
Ursula K. Le Guin
Ursula Kroeber Le Guin is an American author. She has written novels, poetry, children's books, essays, and short stories, notably in fantasy and science fiction...
's anarchist
Anarchism
Anarchism is generally defined as the political philosophy which holds the state to be undesirable, unnecessary, and harmful, or alternatively as opposing authority in the conduct of human relations...
science fiction novel The Dispossessed
The Dispossessed
The Dispossessed: An Ambiguous Utopia is a 1974 utopian science fiction novel by Ursula K. Le Guin, set in the same fictional universe as that of The Left Hand of Darkness . The book won the Nebula Award for Best Novel in 1974, both the Hugo and Locus Awards in 1975, and received a nomination for...
, whose subtitle was An Ambiguous Utopia. It is also loosely linked to several others of his works (particularly Neveryóna) in its references to "the modular calculus", a vaguely described future mathematics that would analyze analogies, fictional constructs, and possibly human personalities. The most recent edition from Wesleyan University Press
Wesleyan University Press
Wesleyan University Press is a university press that is part of Wesleyan University in Middletown, Connecticut. The Press is currently directed by Suzanna Tamminen, a published poet and essayist...
(1996) has a foreword by the postmodern novelist Kathy Acker
Kathy Acker
Kathy Acker was an American experimental novelist, punk poet, playwright, essayist, postmodernist and sex-positive feminist writer. She was strongly influenced by the Black Mountain School, William S...
, focusing on Trouble on Triton as Orphic
Orpheus
Orpheus was a legendary musician, poet, and prophet in ancient Greek religion and myth. The major stories about him are centered on his ability to charm all living things and even stones with his music; his attempt to retrieve his wife from the underworld; and his death at the hands of those who...
fiction.

As the subtitle implies, the novel offers several conflicting perspectives on the concept of utopia
Utopia
Utopia is an ideal community or society possessing a perfect socio-politico-legal system. The word was imported from Greek by Sir Thomas More for his 1516 book Utopia, describing a fictional island in the Atlantic Ocean. The term has been used to describe both intentional communities that attempt...
. Utopia literally means "good place" or "no place". Delany takes the term heterotopia
Heterotopia (space)
Heterotopia is a concept in human geography elaborated by philosopher Michel Foucault to describe places and spaces that function in non-hegemonic conditions...
from the writings of philosopher Michel Foucault
Michel Foucault
Michel Foucault , born Paul-Michel Foucault , was a French philosopher, social theorist and historian of ideas...
. Literally, heterotopia means "other place" or "a place of differences". Foucault uses the term to designate spaces outside everyday fixed institutional and social spaces, for example trains, motels and cemeteries. In the novel's future solar system
Solar System
The Solar System consists of the Sun and the astronomical objects gravitationally bound in orbit around it, all of which formed from the collapse of a giant molecular cloud approximately 4.6 billion years ago. The vast majority of the system's mass is in the Sun...
, Neptune's
Neptune
Neptune is the eighth and farthest planet from the Sun in the Solar System. Named for the Roman god of the sea, it is the fourth-largest planet by diameter and the third largest by mass. Neptune is 17 times the mass of Earth and is slightly more massive than its near-twin Uranus, which is 15 times...
moon Triton
Triton (moon)
Triton is the largest moon of the planet Neptune, discovered on October 10, 1846, by English astronomer William Lassell. It is the only large moon in the Solar System with a retrograde orbit, which is an orbit in the opposite direction to its planet's rotation. At 2,700 km in diameter, it is...
supports one of several human societies independent from Earth
Earth
Earth is the third planet from the Sun, and the densest and fifth-largest of the eight planets in the Solar System. It is also the largest of the Solar System's four terrestrial planets...
, which has developed along radically libertarian
Libertarianism
Libertarianism, in the strictest sense, is the political philosophy that holds individual liberty as the basic moral principle of society. In the broadest sense, it is any political philosophy which approximates this view...
lines in some ways: though a representative government exists, it has virtually no power to regulate private behavior, and citizens may choose to live in an area where no laws apply at all. Technology provides for a high degree of self-modification, so that one can change one's physical appearance, gender, sexual orientation
Sexual orientation
Sexual orientation describes a pattern of emotional, romantic, or sexual attractions to the opposite sex, the same sex, both, or neither, and the genders that accompany them. By the convention of organized researchers, these attractions are subsumed under heterosexuality, homosexuality,...
, and even specific patterns of likes and dislikes.

The novel examines how Triton's freedoms and customs are perceived by the main characters, particularly Bron Helstrom, a young man who has previously worked on Mars
Mars
Mars is the fourth planet from the Sun in the Solar System. The planet is named after the Roman god of war, Mars. It is often described as the "Red Planet", as the iron oxide prevalent on its surface gives it a reddish appearance...
as a male prostitute. The society of Mars is far harsher than that of Triton, and it has evidently influenced Bron's personality. He is self-absorbed, often lacks insight about himself and others, and has great difficulty with personal relationships. Though the civilization of Triton offers everything that he could reasonably want, he is unhappy with his life, out of harmony with those around him, and continually looking for others to blame whenever things go wrong.

As the novel continues, political tensions between Triton and Earth lead to a destructive interplanetary war
War
War is a state of organized, armed, and often prolonged conflict carried on between states, nations, or other parties typified by extreme aggression, social disruption, and usually high mortality. War should be understood as an actual, intentional and widespread armed conflict between political...
. This is mainly used as the backdrop for Bron's (ultimately disastrous) relationship with a brilliant young woman known as the Spike, but Delany speculates interestingly on how an interplanetary war might actually unfold.

Although unsatisfied with the novel's "abrupt" conclusion, Richard A. Lupoff
Richard A. Lupoff
Richard Allen Lupoff is an American science fiction and mystery author, who has also written humor, satire, non-fiction and reviews. In addition to his two dozen novels and more than 40 short stories, he has also edited science-fantasy anthologies. He is an expert on the writing of Edgar Rice...
praised Triton as "a thoroughly absorbing, highly rewarding reading experience. . . . a noble and fascinating experiment [that] speaks well for the author."


Connections to other works

Bron's home city of Bellona, Mars shares its name with the Bellona where Delany's Dhalgren
Dhalgren
Dhalgren is a science fiction novel by Samuel R. Delany. The story begins with a cryptic passage:to wound the autumnal city.So howled out for the world to give him a name.The in-dark answered with wind....
is set.

The complex game vlet, which Bron observes the play of, is inspired by the Joanna Russ
Joanna Russ
Joanna Russ was an American writer, academic and feminist. She is the author of a number of works of science fiction, fantasy and feminist literary criticism such as How to Suppress Women's Writing, as well as a contemporary novel, On Strike Against God, and one children's book, Kittatinny...
short story "A Game of Vlet," found in her collection The Zanzibar Cat
The Zanzibar Cat
The Zanzibar Cat is a feminist science fiction collection of short stories by Joanna Russ, first published in 1983 by Arkham House. It was the author's first collection of short fiction and was published in an edition of 3,526 copies. The story, "When It Changed", won a Nebula Award in 1972. "Old...
. 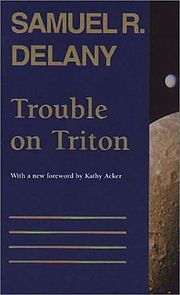