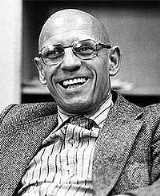 Foucault is best known for his critical studies
Critical theory
Critical theory is an examination and critique of society and culture, drawing from knowledge across the social sciences and humanities. The term has two different meanings with different origins and histories: one originating in sociology and the other in literary criticism...
of social institutions, most notably psychiatry
Psychiatry
Psychiatry is the medical specialty devoted to the study and treatment of mental disorders. These mental disorders include various affective, behavioural, cognitive and perceptual abnormalities...
, medicine, the human sciences and the prison system, as well as for his work
The History of Sexuality
The History of Sexuality is a three-volume series of books by French philosopher and historian Michel Foucault written between 1976 and 1984...
on the history of human sexuality
History of human sexuality
The social construction of sexual behavior—its taboos, regulation and social and political impact—has had a profound effect on the various cultures of the world since prehistoric times.- Sources :...
.

In what work does Michel Foucault discuss Ignatius of Loyola?
More

The soul is the prison of the body.

I'm very proud that some people think that I'm a danger for the intellectual health of students. When people start thinking of health in intellectual activities, I think there is something wrong. In their opinion I am a dangerous man, since I am a crypto-Marxist, an irrationalist, a nihilist.

How to define the moment that I write?

As quoted in Who's Who in Contemporary Gay & Lesbian History: From World War II to the Present Day (2001) by Robert Aldrich and Gary Wotherspoon ISBN 041522974X
More
x