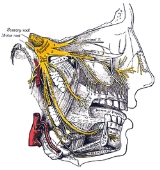 Overview
The trigeminal nerve (the fifth cranial nerve, also called the fifth nerve, or simply CNV or CN5) contains both sensory and motor fibres. It is responsible for sensation in the face and certain motor functions such as biting, chewing, and swallowing. Sensory information from the face and body is processed by parallel pathways in the central nervous system. The motor division of the trigeminal nerve is derived from the basal plate
Basal plate (neural tube)
In the developing nervous system, the basal plate is the region of the neural tube ventral to the sulcus limitans. It extends from the rostral mesencephalon to the end of the spinal cord and contains primarily motor neurons, whereas neurons found in the alar plate are primarily associated with...
of the embryo
Embryo
An embryo is a multicellular diploid eukaryote in its earliest stage of development, from the time of first cell division until birth, hatching, or germination...
nic pons
Pons
The pons is a structure located on the brain stem, named after the Latin word for "bridge" or the 16th-century Italian anatomist and surgeon Costanzo Varolio . It is superior to the medulla oblongata, inferior to the midbrain, and ventral to the cerebellum. In humans and other bipeds this means it...
, while the sensory division originates from the cranial neural crest
Cranial neural crest
The cranial neural crest is a form of neural crest.The cranial neural crest arises in the anterior and populates the face and the pharyngeal arches giving rise to bones, cartilage, nerves and connective tissue...
.
The sensory function of the trigeminal nerve is to provide the tactile, proprioceptive, and nociceptive
Nociception
Nociception is defined as "the neural processes of encoding and processing noxious stimuli." It is the afferent activity produced in the peripheral and central nervous system by stimuli that have the potential to damage tissue...
afference of the face and mouth.

Explain how natural teeth aresupported by alveolar bone and also describe the function of the nerve and blood supply to the teeth?
More
x