Encyclopedia
Trench raiding was a feature of trench warfare
Trench warfare
Trench warfare is a form of occupied fighting lines, consisting largely of trenches, in which troops are largely immune to the enemy's small arms fire and are substantially sheltered from artillery...
which developed during World War I
World War I
World War I , which was predominantly called the World War or the Great War from its occurrence until 1939, and the First World War or World War I thereafter, was a major war centred in Europe that began on 28 July 1914 and lasted until 11 November 1918...
. It was the practice of making small scale surprise attacks on enemy position. Raids
Raid (military)
Raid, also known as depredation, is a military tactic or operational warfare mission which has a specific purpose and is not normally intended to capture and hold terrain, but instead finish with the raiding force quickly retreating to a previous defended position prior to the enemy forces being...
were made by both sides in the conflict and always took place at night for reasons of stealth. Any attempt to raid a trench during daylight hours would have been pointless because it would have been quickly spotted: enemy machine gun
Machine gun
A machine gun is a fully automatic mounted or portable firearm, usually designed to fire rounds in quick succession from an ammunition belt or large-capacity magazine, typically at a rate of several hundred rounds per minute....
ners and sniper
Sniper
A sniper is a marksman who shoots targets from concealed positions or distances exceeding the capabilities of regular personnel. Snipers typically have specialized training and distinct high-precision rifles....
s had a clear view of no man's land
No Man's Land
No man's land is an unoccupied area between two opposing positions.No Man's Land may also refer to:-Places:In the United Kingdom* No Man's Land, Cornwall, England* No Man's Land Fort, off the coast of England* Nomansland, Devon, England...
and could easily shoot anyone who showed their head above the trench parapet
Parapet
A parapet is a wall-like barrier at the edge of a roof, terrace, balcony or other structure. Where extending above a roof, it may simply be the portion of an exterior wall that continues above the line of the roof surface, or may be a continuation of a vertical feature beneath the roof such as a...
.

Typically, raids were carried out at night by small teams of men who would black up their faces with burnt cork before crossing the barbed wire
Barbed wire
Barbed wire, also known as barb wire , is a type of fencing wire constructed with sharp edges or points arranged at intervals along the strand. It is used to construct inexpensive fences and is used atop walls surrounding secured property...
and other debris of no man's land to infiltrate enemy trench systems. The distance between friendly and enemy front lines varied, but was generally several hundred metres. 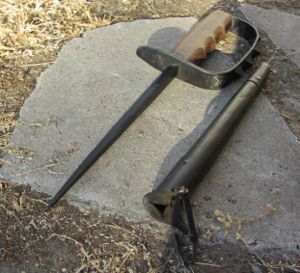 Despite the fact that World War I was the first conflict to be fought by mechanized
Armoured warfare
Armoured warfare or tank warfare is the use of armoured fighting vehicles in modern warfare. It is a major component of modern methods of war....
means, trench raiding was very similar to medieval warfare insofar as it was fought face-to-face with crude weaponry. Trench raiders were lightly equipped for stealthy, unimpeded movement. Typically, raiding parties were armed with deadly homemade trench raiding club
Trench raiding club
Trench raiding clubs were homemade mêlée weapons used by both the Allies and the Central Powers during World War I. Clubs were used during nighttime trench raiding expeditions as a quiet and effective way of killing or wounding enemy soldiers. The clubs were usually made out of wood. It was common...
s, bayonet
Bayonet
A bayonet is a knife, dagger, sword, or spike-shaped weapon designed to fit in, on, over or underneath the muzzle of a rifle, musket or similar weapon, effectively turning the gun into a spear...
s, trench knives
Trench knife
A Trench knife is a combat knife designed to kill or gravely incapacitate an enemy soldier at close quarters, as might be encountered in a trenchline or other confined area. It was developed in response to a need for a close combat weapon for soldiers conducting assaults and raids on enemy...
, hatchet
Hatchet
A hatchet is a single-handed striking tool with a sharp blade used to cut and split wood...
s, pickaxe handles and brass knuckles
Brass knuckles
Brass knuckles, also sometimes called knuckles, knucks, brass knucks, or knuckledusters, are weapons used in hand-to-hand combat. Brass knuckles are pieces of metal, usually steel despite their name, shaped to fit around the knuckles...
. The choice of weaponry was deliberate: the raiders' intention was to kill or capture people quietly, without drawing attention to their activities. Clearly, this would have been impossible if they had routinely used firearms during raids. Trench raiders were also armed with more modern weapons such as pistol
Pistol
When distinguished as a subset of handguns, a pistol is a handgun with a chamber that is integral with the barrel, as opposed to a revolver, wherein the chamber is separate from the barrel as a revolving cylinder. Typically, pistols have an effective range of about 100 feet.-History:The pistol...
s and hand grenade
Hand grenade
A hand grenade is any small bomb that can be thrown by hand. Hand grenades are classified into three categories, explosive grenades, chemical and gas grenades. Explosive grenades are the most commonly used in modern warfare, and are designed to detonate after impact or after a set amount of time...
s, though these were only intended to be used in an emergency i.e. if the enemy discovered their activities and raised the alarm.

Standard practice was to creep slowly up on the sentries guarding a small sector of an enemy front line trench (looking for the glow of cigarettes in the dark or listening for conversations) then kill them as quietly as possible. Having secured the trench the raiders would complete their mission objectives as quickly as possible, ideally within several minutes. Raiders were aware that the longer they stayed in the trench, the greater the likelihood of enemy reinforcements arriving. Grenades would be thrown into dugouts where enemy troops were sleeping before the raiders left the enemy lines to return to their own.

Trench raiding had multiple purposes. Typically, the intention would be one or more of the following:


There was always a risk that returning raiders could be shot in so-called friendly fire
Friendly fire
Friendly fire is inadvertent firing towards one's own or otherwise friendly forces while attempting to engage enemy forces, particularly where this results in injury or death. A death resulting from a negligent discharge is not considered friendly fire...
incidents. Therefore, it was standard procedure to notify sentries along the line whenever raiding parties were sent out, and to use some form of password
Password
A password is a secret word or string of characters that is used for authentication, to prove identity or gain access to a resource . The password should be kept secret from those not allowed access....
system so that returning raiders could identify themselves when challenged in the dark.