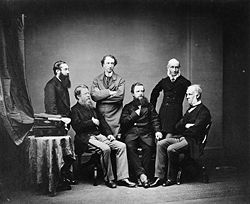 The Treaty of Washington was a treaty signed and ratified by Great Britain and the United States in 1871 that settled various disputes between the countries, in particular the Alabama Claims
Alabama Claims
The Alabama Claims were a series of claims for damages by the United States government against the government of Great Britain for the assistance given to the Confederate cause during the American Civil War. After international arbitration endorsed the American position in 1872, Britain settled...
.

In early 1871, the British government sent Sir John Rose to the United States to ascertain whether negotiations to settle the Northwestern boundary dispute
Pig War
The Pig War was a confrontation in 1859 between the United States and the British Empire over the boundary between the US and British North America. The territory in dispute was the San Juan Islands, which lie between Vancouver Island and the North American mainland...
would be acceptable to President Ulysses S. Grant
Ulysses S. Grant
Ulysses S. Grant was the 18th President of the United States as well as military commander during the Civil War and post-war Reconstruction periods. Under Grant's command, the Union Army defeated the Confederate military and ended the Confederate States of America...
. The U.S. government through the adroit and diplomatic abilities of Grant's Secretary of State, Hamilton Fish
Hamilton Fish
Hamilton Fish was an American statesman and politician who served as the 16th Governor of New York, United States Senator and United States Secretary of State. Fish has been considered one of the best Secretary of States in the United States history; known for his judiciousness and reform efforts...
, cordially received his advances and, on January 26, Sir Edward Thornton
Edward Thornton (diplomat)
Sir Edward Thornton KCB was a prominent British diplomat, who held posts in Latin America, Turkey, Russia, and served for fourteen years as Minister to the United States.-Early career:...
, the British Minister at Washington formally proposed the appointment of a joint high commission to meet in Washington to resolve the dispute. The United States readily consented, provided that the differences growing out of the Civil War
American Civil War
The American Civil War was a civil war fought in the United States of America. In response to the election of Abraham Lincoln as President of the United States, 11 southern slave states declared their secession from the United States and formed the Confederate States of America ; the other 25...
be among the subjects to be considered. The British government promptly accepted the American proviso and the president appointed commissioners.

The British government selected as its commissioners Earl de Grey
George Robinson, 1st Marquess of Ripon
George Frederick Samuel Robinson, 1st Marquess of Ripon KG, GCSI, CIE, PC , known as Viscount Goderich from 1833 to 1859 and as the Earl de Grey and Ripon from 1859 to 1871, was a British politician who served in every Liberal cabinet from 1861 until his death forty-eight years later.-Background...
(Marquess of Ripon
Marquess of Ripon
Marquess of Ripon was a title in the Peerage of the United Kingdom. It was created in 1870 for the Liberal politician George Robinson, 2nd Earl of Ripon. The Robinson family descended from William Robinson , a wealthy York merchant, Lord Mayor and Member of Parliament for York...
), Sir Stafford Northcote
Stafford Northcote, 1st Earl of Iddesleigh
Stafford Henry Northcote, 1st Earl of Iddesleigh GCB, PC , known as Sir Stafford Northcote, Bt, from 1851 to 1885, was a British Conservative politician...
, Sir Edward Thornton, Mountague Bernard
Mountague Bernard
Mountague Bernard was an English international lawyer.-Life:He was the third son of Charles Bernard of Jamaica, the descendant of a Huguenot family, and was born at Tibberton Court, Gloucestershire....
, and Canadian Prime Minister
Prime Minister of Canada
The Prime Minister of Canada is the primary minister of the Crown, chairman of the Cabinet, and thus head of government for Canada, charged with advising the Canadian monarch or viceroy on the exercise of the executive powers vested in them by the constitution...
Sir John A. Macdonald, aided by .
Although the treaty was signed in the name of the British Empire
British Empire
The British Empire comprised the dominions, colonies, protectorates, mandates and other territories ruled or administered by the United Kingdom. It originated with the overseas colonies and trading posts established by England in the late 16th and early 17th centuries. At its height, it was the...
, Macdonald's presence established that the newly-formed Dominion of Canada
History of Canada
The history of Canada covers the period from the arrival of Paleo-Indians thousands of years ago to the present day. Canada has been inhabited for millennia by distinctive groups of Aboriginal peoples, among whom evolved trade networks, spiritual beliefs, and social hierarchies...
would at least take part in settling foreign matters that affected it directly, especially with respect to dealings with the United States. The joint commission entered at once upon its task and on 8 May concluded a treaty which received the prompt approval of the two governments. Aside from the settlement of the dispute growing out of the so-called Alabama Claims, provision was made for the adjustment of the differences with regard to the northeastern fisheries by the appointment of a mixed commission to meet at Halifax
City of Halifax
Halifax is a city in Canada, which was the capital of the province of Nova Scotia and shire town of Halifax County. It was the largest city in Atlantic Canada until it was amalgamated into Halifax Regional Municipality in 1996...
and pass upon the relative value of certain reciprocal privileges granted each of the contracting parties. Finally, provision was made for submitting to the arbitration by William I, German Emperor
William I, German Emperor
William I, also known as Wilhelm I , of the House of Hohenzollern was the King of Prussia and the first German Emperor .Under the leadership of William and his Chancellor Otto von Bismarck, Prussia achieved the unification of Germany and the...
, of the Pig War
Pig War
The Pig War was a confrontation in 1859 between the United States and the British Empire over the boundary between the US and British North America. The territory in dispute was the San Juan Islands, which lie between Vancouver Island and the North American mainland...
dispute concerning the maritime boundary
Maritime boundary
Maritime boundary is a conceptual means of division of the water surface of the planet into maritime areas that are defined through surrounding physical geography or by human geography. As such it usually includes areas of exclusive national rights over the mineral and biological resources,...
in Puget Sound
Puget Sound
Puget Sound is a sound in the U.S. state of Washington. It is a complex estuarine system of interconnected marine waterways and basins, with one major and one minor connection to the Strait of Juan de Fuca and the Pacific Ocean — Admiralty Inlet being the major connection and...
. Thus, the treaty made an important impact on International Law
Supranational law
Supranational law is a form of international law, based on the limitation of the rights of sovereign nations between one another. It is distinguished from public international law, because in supranational law, nations explicitly submit their right to make judicial decisions by treaty to a set of...
including effects on the 1878 Congress of Berlin
Congress of Berlin
The Congress of Berlin was a meeting of the European Great Powers' and the Ottoman Empire's leading statesmen in Berlin in 1878. In the wake of the Russo-Turkish War of 1877–78, the meeting's aim was to reorganize the countries of the Balkans...
.

At Geneva
Geneva
Geneva In the national languages of Switzerland the city is known as Genf , Ginevra and Genevra is the second-most-populous city in Switzerland and is the most populous city of Romandie, the French-speaking part of Switzerland...
, in 1872, the United States was awarded $15,500,000 pursuant to the terms of the treaty, and the British apologized for the destruction caused by the British-built Confederate ships, while admitting no guilt.

Compensation for the Fenian raids
Fenian raids
Between 1866 and 1871, the Fenian raids of the Fenian Brotherhood who were based in the United States; on British army forts, customs posts and other targets in Canada, were fought to bring pressure on Britain to withdraw from Ireland. They divided many Catholic Irish-Canadians, many of whom were...
was not included, and American fishermen were given rights to fish in Canadian waters. This greatly irritated Macdonald, but he nonetheless signed the treaty under the argument that he must as a junior member of the British delegation. The treaty was published in the Canadian press to widespread condemnation, but Macdonald remained silent on the issue. When it came time to debate the treaty in the Canadian House of Commons
Canadian House of Commons
The House of Commons of Canada is a component of the Parliament of Canada, along with the Sovereign and the Senate. The House of Commons is a democratically elected body, consisting of 308 members known as Members of Parliament...
, he revealed that he had been secretly negotiating for a better deal, and had obtained a cash payment from the Americans for the use of Canadian fishing grounds, and in lieu of any claim against the United States over the Fenians. Furthermore the British had agreed to a guaranteed loan of £4,000,000 for the construction of the Canadian Pacific Railway
Canadian Pacific Railway
The Canadian Pacific Railway , formerly also known as CP Rail between 1968 and 1996, is a historic Canadian Class I railway founded in 1881 and now operated by Canadian Pacific Railway Limited, which began operations as legal owner in a corporate restructuring in 2001...
. This masterstroke of diplomacy and statecraft allowed an otherwise deeply unpopular treaty to be ratified by the Canadian Parliament
Parliament of Canada
The Parliament of Canada is the federal legislative branch of Canada, seated at Parliament Hill in the national capital, Ottawa. Formally, the body consists of the Canadian monarch—represented by her governor general—the Senate, and the House of Commons, each element having its own officers and...
.

The Treaty of Washington had a significant effect on the United States' long term relationship with Canada, and Britain. With the demilitarization of the U.S.–Canadian border
Rush-Bagot Treaty
The Rush-Bagot Treaty was a treaty between the United States and Britain ratified by the United States Senate on April 16, 1817 . The treaty provided for a large demilitarization of the Great Lakes and Lake Champlain, where many British naval arrangements and forts still remained...
, the resolution of outstanding issues via the Treaty of Washington, and the industrialization of the Great Lakes
Great Lakes
The Great Lakes are a collection of freshwater lakes located in northeastern North America, on the Canada – United States border. Consisting of Lakes Superior, Michigan, Huron, Erie, and Ontario, they form the largest group of freshwater lakes on Earth by total surface, coming in second by volume...
region, war between the United States, and Canada and/or Britain became highly unlikely. The treaty laid the foundation for a The Great Rapprochement
The Great Rapprochement
The Great Rapprochement, a term usually attributed to Bradford Perkins, is used to describe the convergence of social and political objectives between the United States and the United Kingdom and its colonies in the two decades before World War I....
or convergence of interests between Britain and the U.S.