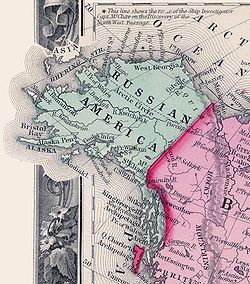 The Treaty of Saint Petersburg of 1825, also known as the Anglo-Russian Convention of 1825, defined the boundaries between Russian America and British claims and possessions in the Pacific Northwest
Pacific Northwest
The Pacific Northwest is a region in northwestern North America, bounded by the Pacific Ocean to the west and, loosely, by the Rocky Mountains on the east. Definitions of the region vary and there is no commonly agreed upon boundary, even among Pacific Northwesterners. A common concept of the...
of North America
North America
North America is a continent wholly within the Northern Hemisphere and almost wholly within the Western Hemisphere. It is also considered a northern subcontinent of the Americas...
at 54 degrees 40 minutes north latitude, which had the year before been established as the limit of overlapping American claims in the parallel Russo-American Treaty of 1824. The Russian sphere in the region was later sold
Alaska purchase
The Alaska Purchase was the acquisition of the Alaska territory by the United States from Russia in 1867 by a treaty ratified by the Senate. The purchase, made at the initiative of United States Secretary of State William H. Seward, gained of new United States territory...
to the United States
United States
The United States of America is a federal constitutional republic comprising fifty states and a federal district...
, becoming Alaska
Alaska
Alaska is the largest state in the United States by area. It is situated in the northwest extremity of the North American continent, with Canada to the east, the Arctic Ocean to the north, and the Pacific Ocean to the west and south, with Russia further west across the Bering Strait...
, while to the south of the division point was the British claim, the remnant of which today is coast of the Canadian province of British Columbia
British Columbia
British Columbia is the westernmost of Canada's provinces and is known for its natural beauty, as reflected in its Latin motto, Splendor sine occasu . Its name was chosen by Queen Victoria in 1858...
. and associated rights and obligations concerning waters and ports in the region. The treaty, in establishing a vague division of coastal Russian interests and inland British interests northward from 56 degrees north, led to conflicting interpretations of the meaning of the treaty's wording which later manifested in the Alaska Boundary Dispute
Alaska Boundary Dispute
The Alaska boundary dispute was a territorial dispute between the United States and Canada . It was resolved by arbitration in 1903. The dispute had been going on between the Russian and British Empires since 1821, and was inherited by the United States as a consequence of the Alaska Purchase in...
between the United States on the one hand, and Canada and the British Empire on the other.

Other terms of the treaty, including the right to navigation by British vessels to both commerce in the region affected, and also access to rivers crossing the designated boundary, were exercised by the Hudson's Bay Company in 1834 but were met with opposition by then-RAC Governor Wrangel
Ferdinand von Wrangel
Baron Ferdinand Friedrich Georg Ludwig von Wrangel – May 25 , 1870) was a Russian explorer and seaman, Honorable Member of the Saint Petersburg Academy of Sciences, a founder of the Russian Geographic Society...
in the form of warships and a blockade. This conflict, known as the Dryad affair, led to the Anglo-Russian Convention of 1839, in which the RAC agreed to lease the mainland portion of the region south of Cape Spencer
Cape Spencer Light
The Cape Spencer Light is a lighthouse in Alaska,United States, next to the entrance to Cross Sound and Icy Strait. The light is still an active aid to navigation...
at the entrance to Cross Sound
Cross Sound
Cross Sound is a passage in the Alexander Archipelago in the southeastern region of the U.S. state of Alaska, located between Chichagof Island to its south and the mainland to its north...
and the HBC promised to supply Russian America with foodstuffs and manufactured goods. In addition the HBC waived its demand for payments for damages incurred during the Dryad affair. The same clauses enabled British access to the Stikine River goldfields in 1862 but were not assumed by the Americans upon their purchase of Russian interests in 1867, resulting in further conflict over British rights of access to the inland regions. The treaty's terms also played a part in the terms of the Bering Sea Arbitration
Bering Sea Arbitration
The Bering Sea Arbitration arose out of a fishery dispute between Great Britain and the United States in the 1880s which was closed by this arbitration in 1893.-Origins:...
and likewise in terms of other decisions in Alaska and US courts over marine and offshore interests.