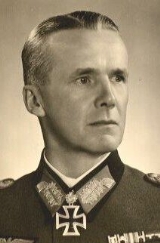 Herr was born in Weferlingen
Weferlingen
Weferlingen is a village and a former municipality in the Börde district in Saxony-Anhalt, Germany. Since 1 January 2010, it is part of the town Oebisfelde-Weferlingen....
in the Prussian
Kingdom of Prussia
The Kingdom of Prussia was a German kingdom from 1701 to 1918. Until the defeat of Germany in World War I, it comprised almost two-thirds of the area of the German Empire...
Province of Saxony
Province of Saxony
The Province of Saxony was a province of the Kingdom of Prussia and later the Free State of Prussia from 1816 until 1945. Its capital was Magdeburg.-History:The province was created in 1816 out of the following territories:...
. He died in Achterwehr
Achterwehr
Achterwehr is a municipality, located in the district of Rendsburg-Eckernförde in the German Bundesland of Schleswig-Holstein.Achterwehr is situated 12 km west of Kiel and about 5 km south of the Nord-Ostsee-Kanal...
.