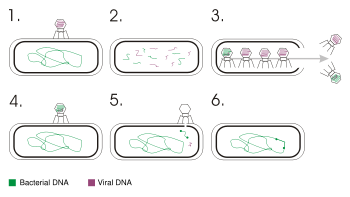 Transduction is the process by which DNA
DNA
Deoxyribonucleic acid is a nucleic acid that contains the genetic instructions used in the development and functioning of all known living organisms . The DNA segments that carry this genetic information are called genes, but other DNA sequences have structural purposes, or are involved in...
is transferred from one bacterium to another by a virus
Virus
A virus is a small infectious agent that can replicate only inside the living cells of organisms. Viruses infect all types of organisms, from animals and plants to bacteria and archaea...
. It also refers to the process whereby foreign DNA is introduced into another cell via a viral vector
Viral vector
Viral vectors are a tool commonly used by molecular biologists to deliver genetic material into cells. This process can be performed inside a living organism or in cell culture . Viruses have evolved specialized molecular mechanisms to efficiently transport their genomes inside the cells they infect...
. Transduction does not require cell-to-cell contact (which occurs in conjugation), and it is DNAase resistant (transformation is susceptible to DNAase). Transduction is a common tool used by molecular biologists to stably introduce a foreign gene into a host cell's genome
Genome
In modern molecular biology and genetics, the genome is the entirety of an organism's hereditary information. It is encoded either in DNA or, for many types of virus, in RNA. The genome includes both the genes and the non-coding sequences of the DNA/RNA....
.

When bacteriophages (viruses that infect bacteria) infect a bacterial cell, their normal mode of reproduction is to harness the replicational
DNA replication
DNA replication is a biological process that occurs in all living organisms and copies their DNA; it is the basis for biological inheritance. The process starts with one double-stranded DNA molecule and produces two identical copies of the molecule...
, transcriptional
Transcription (genetics)
Transcription is the process of creating a complementary RNA copy of a sequence of DNA. Both RNA and DNA are nucleic acids, which use base pairs of nucleotides as a complementary language that can be converted back and forth from DNA to RNA by the action of the correct enzymes...
, and translation machinery of the host bacterial cell to make numerous virions, or complete viral particles, including the viral DNA or RNA and the protein coat.

Transduction and specialized transduction are especially important because they explain how antibiotic drugs become ineffective due to the transfer of resistant genes between bacteria. In addition, hopes to create medical methods of genetic modification of diseases such as Duschenne/Becker Muscular Dystrophy are based upon these methodologies.

Transduction happens through either the lytic cycle or the lysogenic cycle.

If the lysogenic cycle is adopted, the phage chromosome is integrated (by covalent bonds) into the bacterial chromosome, where it can remain dormant for thousands of generations. If the lysogen is induced (by UV light for example), the phage genome is excised from the bacterial chromosome and initiates the lytic cycle, which culminates in lysis
Lysis
Lysis refers to the breaking down of a cell, often by viral, enzymic, or osmotic mechanisms that compromise its integrity. A fluid containing the contents of lysed cells is called a "lysate"....
of the cell and the release of phage particles. The lytic cycle leads to the production of new phage particles which are released by lysis of the host.


Transduction as a method of transfer genetic material

Generalized transduction is the process by which any bacterial gene may be transferred to another bacterium via a bacteriophage, and typically carries only bacterial DNA and no viral DNA. In essence, this is the packaging of bacterial DNA into a viral envelope. This may occur in two main ways, recombination and headful packaging.

If bacteriophages undertake the lytic cycle of infection upon entering a bacterium, the virus will take control of the cell’s machinery for use in replicating its own viral DNA. If by chance bacterial chromosomal DNA is inserted into the viral capsid which is usually used to encapsulate the viral DNA, the mistake will lead to generalized transduction.

If the virus replicates using 'headful packaging', it attempts to fill the nucleocapsid with genetic material. If the viral genome results in spare capacity, viral packaging mechanisms may incorporate bacterial genetic material into the new virion.

Specialized transduction is the process by which genes that are near the bacteriophage genome may be transferred to another bacterium via a bacteriophage. The genes that get transferred (donor genes) always depend on where the phage genome is located on the chromosome. This second type of recombination event which is the result of mistakes in the transition from a virus' lysogenic to lytic cycle is called specialized transduction, and non-viral DNA is carried as an insertion/substitution. If a virus incorrectly removes itself from the bacterial chromosome, bacterial DNA from either end of the phage DNA may be packaged into the viral capsid. Specialized transduction leads to three possible outcomes:


When the partially encapsulated phage material infects another cell and becomes a "prophage" (is covalently bonded into the infected cell's chromosome), the partially coded prophage DNA is called a "heterogenote".

Esther Lederberg
Esther Lederberg
Esther Miriam Zimmer Lederberg was an American microbiologist and immunologist and pioneer of bacterial genetics...
, Larry Morse, Herman Kalckar
Herman Kalckar
Herman Moritz Kalckar was a Danish biochemist who pioneered the study of cellular respiration. Trained as a medical doctor at the University of Copenhagen, Kalckar then conducted research for his Ph. D. in Ejnar Lundsgaard's physiology laboratory, work which helped establish a fundamental...
, Michael Yarmolinsky, and Yukinori Hirota went on to do detailed studies of Galactosemia
Galactosemia
Galactosemia is a rare genetic metabolic disorder that affects an individual's ability to metabolize the sugar galactose properly. Although the sugar lactose can metabolize to galactose, galactosemia is not related to and should not be confused with lactose intolerance...
. Specialized transduction was used in these studies for gene mapping. At about this time, Esther Lederberg, Julius Adler, and Enrico Calef were also engaged in similar research involving Maltophilia.

Viruses with RNA genomes are not able to package DNA and so do not usually make this mistake.

Upon lysis
Lysis
Lysis refers to the breaking down of a cell, often by viral, enzymic, or osmotic mechanisms that compromise its integrity. A fluid containing the contents of lysed cells is called a "lysate"....
of the host cell, the mispackaged virions containing bacterial DNA can attach to other bacterial cells and inject the DNA they have packaged, thus transferring bacterial DNA from one cell to another. This DNA can become part of the new bacterium's genome and thus be stably inherited.


More general uses of the term

More generally, transduction is the process by which genetic material, e.g. DNA
DNA
Deoxyribonucleic acid is a nucleic acid that contains the genetic instructions used in the development and functioning of all known living organisms . The DNA segments that carry this genetic information are called genes, but other DNA sequences have structural purposes, or are involved in...
or siRNA
Sírna
Sírna Sáeglach , son of Dian mac Demal, son of Demal mac Rothechtaid, son of Rothechtaid mac Main, was, according to medieval Irish legend and historical tradition, a High King of Ireland...
, is inserted into a cell by a virus.

Common techniques in molecular biology
Molecular biology
Molecular biology is the branch of biology that deals with the molecular basis of biological activity. This field overlaps with other areas of biology and chemistry, particularly genetics and biochemistry...
are the use of viral vector
Viral vector
Viral vectors are a tool commonly used by molecular biologists to deliver genetic material into cells. This process can be performed inside a living organism or in cell culture . Viruses have evolved specialized molecular mechanisms to efficiently transport their genomes inside the cells they infect...
s (including bacteriophages), electroporation
Electroporation
Electroporation, or electropermeabilization, is a significant increase in the electrical conductivity and permeability of the cell plasma membrane caused by an externally applied electrical field...
, or chemical reagents that increase cell permeability. Transfection
Transfection
Transfection is the process of deliberately introducing nucleic acids into cells. The term is used notably for non-viral methods in eukaryotic cells...
and transformation
Transformation (genetics)
In molecular biology transformation is the genetic alteration of a cell resulting from the direct uptake, incorporation and expression of exogenous genetic material from its surroundings and taken up through the cell membrane. Transformation occurs naturally in some species of bacteria, but it can...
are also common ways to insert DNA into a cell.