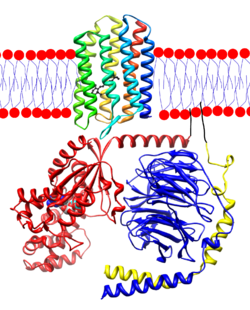 Transducin is a heterotrimeric G protein
G protein
G proteins are a family of proteins involved in transmitting chemical signals outside the cell, and causing changes inside the cell. They communicate signals from many hormones, neurotransmitters, and other signaling factors. G protein-coupled receptors are transmembrane receptors...
that is naturally expressed
Gene expression
Gene expression is the process by which information from a gene is used in the synthesis of a functional gene product. These products are often proteins, but in non-protein coding genes such as ribosomal RNA , transfer RNA or small nuclear RNA genes, the product is a functional RNA...
in vertebrate
Vertebrate
Vertebrates are animals that are members of the subphylum Vertebrata . Vertebrates are the largest group of chordates, with currently about 58,000 species described. Vertebrates include the jawless fishes, bony fishes, sharks and rays, amphibians, reptiles, mammals, and birds...
retina
Retina
The vertebrate retina is a light-sensitive tissue lining the inner surface of the eye. The optics of the eye create an image of the visual world on the retina, which serves much the same function as the film in a camera. Light striking the retina initiates a cascade of chemical and electrical...
rods and cones (a different Transducin gene is expressed in each cell type).

Heterotrimeric Transducin (alpha-beta-gamma subunits
Protein subunit
In structural biology, a protein subunit or subunit protein is a single protein molecule that assembles with other protein molecules to form a protein complex: a multimeric or oligomeric protein. Many naturally occurring proteins and enzymes are multimeric...
) is activated by a conformational change in rhodopsin
Rhodopsin
Rhodopsin, also known as visual purple, is a biological pigment of the retina that is responsible for both the formation of the photoreceptor cells and the first events in the perception of light. Rhodopsins belong to the G-protein coupled receptor family and are extremely sensitive to light,...
due to the absorption
Absorption (electromagnetic radiation)
In physics, absorption of electromagnetic radiation is the way by which the energy of a photon is taken up by matter, typically the electrons of an atom. Thus, the electromagnetic energy is transformed to other forms of energy for example, to heat. The absorption of light during wave propagation is...
of a photon
Photon
In physics, a photon is an elementary particle, the quantum of the electromagnetic interaction and the basic unit of light and all other forms of electromagnetic radiation. It is also the force carrier for the electromagnetic force...
by rhodopsin's active group retinal
Retinal
Retinal, also called retinaldehyde or vitamin A aldehyde, is one of the many forms of vitamin A . Retinal is a polyene chromophore, and bound to proteins called opsins, is the chemical basis of animal vision...
. Activation causes the GDP bound to the alpha subunit to be exchanged with GTP from solution and results in activated alpha dissociating from beta-gamma subunits. Active Transducin-alpha then causes cyclic GMP Phosphodiesterase to increase its activity, thereby lowering the concentration of cGMP
Cyclic guanosine monophosphate
Cyclic guanosine monophosphate is a cyclic nucleotide derived from guanosine triphosphate . cGMP acts as a second messenger much like cyclic AMP...
, an intracellular second-messenger molecule. Decrease in cGMP concentration leads to the closure of cGMP-regulated Na+ and Ca2+ ion channel
Ion channel
Ion channels are pore-forming proteins that help establish and control the small voltage gradient across the plasma membrane of cells by allowing the flow of ions down their electrochemical gradient. They are present in the membranes that surround all biological cells...
s and a hyperpolarized membrane potential
Membrane potential
Membrane potential is the difference in electrical potential between the interior and exterior of a biological cell. All animal cells are surrounded by a plasma membrane composed of a lipid bilayer with a variety of types of proteins embedded in it...
. This chain of signaling events is also called "the vertebrate phototransduction cascade".

The termination of Transducin activity occurs when (active) GTP bound Transducin is hydrolyzed to Transducin-GDP, a process which is accelerated by a complex containing an RGS (Regulator of G-protein signaling)-protein and the gamma-subunit of the effector, cyclic GMP Phosphodiesterase.
The source of this article is wikipedia, the free encyclopedia.  The text of this article is licensed under the GFDL.