Encyclopedia
Toxicology is a branch of biology
Biology
Biology is a natural science concerned with the study of life and living organisms, including their structure, function, growth, origin, evolution, distribution, and taxonomy. Biology is a vast subject containing many subdivisions, topics, and disciplines...
, chemistry
Chemistry
Chemistry is the science of matter, especially its chemical reactions, but also its composition, structure and properties. Chemistry is concerned with atoms and their interactions with other atoms, and particularly with the properties of chemical bonds....
, and medicine
Medicine
Medicine is the science and art of healing. It encompasses a variety of health care practices evolved to maintain and restore health by the prevention and treatment of illness....
concerned with the study of the adverse effects of chemicals on living organisms. It is the study of symptoms, mechanisms, treatments and detection of poison
Poison
In the context of biology, poisons are substances that can cause disturbances to organisms, usually by chemical reaction or other activity on the molecular scale, when a sufficient quantity is absorbed by an organism....
ing, especially the poisoning of people. 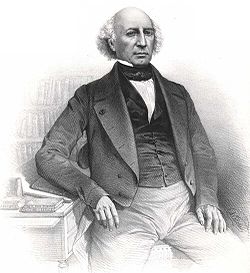 Dioscorides, a Greek physician in the court of the Roman emperor Nero, made the first attempt to classify plants according to their toxic and therapeutic effect. Ibn Wahshiya wrote the Book on Poisons in the 9th or 10th century.

In 1850 Jean Stas
Jean Stas
Jean Servais Stas was a Belgian analytical chemist.- Life and work :Stas was born in Leuven and trained initially as a physician. He later switched to chemistry and worked at the École Polytechnique in Paris under the direction of Jean-Baptiste Dumas...
gave the evidence that the Belgian Count Hypolyte Visart de Bocarmé killed his brother-in-law by poisoning with nicotine
Nicotine
Nicotine is an alkaloid found in the nightshade family of plants that constitutes approximately 0.6–3.0% of the dry weight of tobacco, with biosynthesis taking place in the roots and accumulation occurring in the leaves...

Theophrastus Phillipus Auroleus Bombastus von Hohenheim (1493–1541) (also referred to as Paracelsus
Paracelsus
Paracelsus was a German-Swiss Renaissance physician, botanist, alchemist, astrologer, and general occultist....
, from his belief that his studies were above or beyond the work of Celsus
Aulus Cornelius Celsus
Aulus Cornelius Celsus was a Roman encyclopedist, known for his extant medical work, De Medicina, which is believed to be the only surviving section of a much larger encyclopedia. The De Medicina is a primary source on diet, pharmacy, surgery and related fields, and it is one of the best sources...
- a Roman physician from the first century) is also considered "the father" of toxicology. He is credited with the classic toxicology maxim, "Alle Dinge sind Gift und nichts ist ohne Gift; allein die Dosis macht, dass ein Ding kein Gift ist." which translates as, "All things are poison and nothing is without poison; only the dose makes a thing not a poison." This is often condensed to: "The dose makes the poison" or in Latin "Sola dosis facit venenum".

The relationship between dose and its effects on the exposed organism is of high significance in toxicology. The chief criterion regarding the toxicity of a chemical is the dose, i.e. the amount of exposure to the substance. All substances are toxic under the right conditions. The term refers to the dose of a toxic substance that kills 50 percent of a test population (typically rat
Rat
Rats are various medium-sized, long-tailed rodents of the superfamily Muroidea. "True rats" are members of the genus Rattus, the most important of which to humans are the black rat, Rattus rattus, and the brown rat, Rattus norvegicus...
s or other surrogates when the test concerns human toxicity). LD50 estimations in animals are no longer required for regulatory submissions as a part of pre-clinical development
Pre-clinical development
In drug development, pre-clinical development is a stage of research that begins before clinical trials can begin, and during which important feasibility, iterative testing and drug safety data is collected....
package.

Many substances regarded as poisons are toxic only indirectly. An example is "wood alcohol," or methanol
Methanol
Methanol, also known as methyl alcohol, wood alcohol, wood naphtha or wood spirits, is a chemical with the formula CH3OH . It is the simplest alcohol, and is a light, volatile, colorless, flammable liquid with a distinctive odor very similar to, but slightly sweeter than, ethanol...
, which is chemically converted to formaldehyde
Formaldehyde
Formaldehyde is an organic compound with the formula CH2O. It is the simplest aldehyde, hence its systematic name methanal.Formaldehyde is a colorless gas with a characteristic pungent odor. It is an important precursor to many other chemical compounds, especially for polymers...
and formic acid
Formic acid
Formic acid is the simplest carboxylic acid. Its chemical formula is HCOOH or HCO2H. It is an important intermediate in chemical synthesis and occurs naturally, most notably in the venom of bee and ant stings. In fact, its name comes from the Latin word for ant, formica, referring to its early...
in the liver
Liver
The liver is a vital organ present in vertebrates and some other animals. It has a wide range of functions, including detoxification, protein synthesis, and production of biochemicals necessary for digestion...
. It is the formaldehyde and formic acid that cause the toxic effects of methanol exposure. As for drugs
Medication
A pharmaceutical drug, also referred to as medicine, medication or medicament, can be loosely defined as any chemical substance intended for use in the medical diagnosis, cure, treatment, or prevention of disease.- Classification :...
, many small molecule
Small molecule
In the fields of pharmacology and biochemistry, a small molecule is a low molecular weight organic compound which is by definition not a polymer...
s are made toxic in the liver, a good example being acetaminophen (paracetamol), especially in the presence of chronic alcohol
Alcohol
In chemistry, an alcohol is an organic compound in which the hydroxy functional group is bound to a carbon atom. In particular, this carbon center should be saturated, having single bonds to three other atoms....
use. The genetic variability of certain liver enzyme
Enzyme
Enzymes are proteins that catalyze chemical reactions. In enzymatic reactions, the molecules at the beginning of the process, called substrates, are converted into different molecules, called products. Almost all chemical reactions in a biological cell need enzymes in order to occur at rates...
s makes the toxicity of many compounds differ between one individual and the next. Because demands placed on one liver enzyme can induce activity in another, many molecules become toxic only in combination with others. A family of activities that many toxicologists engage includes identifying which liver enzymes convert a molecule into a poison, what are the toxic products of the conversion and under what conditions and in which individuals this conversion takes place.

Chemical or pharmaceutical toxicology is a scientific discipline involving the study of structure and mechanism related to the toxic effects of chemical agents, and encompasses technology
Technology
Technology is the making, usage, and knowledge of tools, machines, techniques, crafts, systems or methods of organization in order to solve a problem or perform a specific function. It can also refer to the collection of such tools, machinery, and procedures. The word technology comes ;...
advances in research related to chemical aspects of toxicology. Research in this area is strongly multidisciplinary, spanning computational chemistry
Computational chemistry
Computational chemistry is a branch of chemistry that uses principles of computer science to assist in solving chemical problems. It uses the results of theoretical chemistry, incorporated into efficient computer programs, to calculate the structures and properties of molecules and solids...
and synthetic chemistry, proteomics
Proteomics
Proteomics is the large-scale study of proteins, particularly their structures and functions. Proteins are vital parts of living organisms, as they are the main components of the physiological metabolic pathways of cells. The term "proteomics" was first coined in 1997 to make an analogy with...
and metabolomics
Metabolomics
Metabolomics is the scientific study of chemical processes involving metabolites. Specifically, metabolomics is the "systematic study of the unique chemical fingerprints that specific cellular processes leave behind", the study of their small-molecule metabolite profiles...
, drug discovery
Drug discovery
In the fields of medicine, biotechnology and pharmacology, drug discovery is the process by which drugs are discovered or designed.In the past most drugs have been discovered either by identifying the active ingredient from traditional remedies or by serendipitous discovery...
, drug metabolism
Drug metabolism
Drug metabolism is the biochemical modification of pharmaceutical substances by living organisms, usually through specialized enzymatic systems. This is a form of xenobiotic metabolism. Drug metabolism often converts lipophilic chemical compounds into more readily excreted polar products...
and mechanisms of action, bioinformatics
Bioinformatics
Bioinformatics is the application of computer science and information technology to the field of biology and medicine. Bioinformatics deals with algorithms, databases and information systems, web technologies, artificial intelligence and soft computing, information and computation theory, software...
, bioanalytical chemistry
Analytical chemistry
Analytical chemistry is the study of the separation, identification, and quantification of the chemical components of natural and artificial materials. Qualitative analysis gives an indication of the identity of the chemical species in the sample and quantitative analysis determines the amount of...
, chemical biology
Chemical biology
Chemical biology is a scientific discipline spanning the fields of chemistry and biology that involves the application of chemical techniques and tools, often compounds produced through synthetic chemistry, to the study and manipulation of biological systems. This is a subtle difference from...
, and molecular epidemiology
Molecular epidemiology
Molecular epidemiology is a branch of medical science that focuses on the contribution of potential genetic and environmental risk factors, identified at the molecular level, to the etiology, distribution and prevention of disease within families and across populations. This field has emerged from...
.
The source of this article is wikipedia, the free encyclopedia.  The text of this article is licensed under the GFDL.