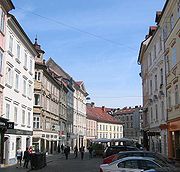 Town Square is a major square in Ljubljana
Ljubljana
Ljubljana is the capital of Slovenia and its largest city. It is the centre of the City Municipality of Ljubljana. It is located in the centre of the country in the Ljubljana Basin, and is a mid-sized city of some 270,000 inhabitants...
, the capital of Slovenia
Slovenia
Slovenia , officially the Republic of Slovenia , is a country in Central and Southeastern Europe touching the Alps and bordering the Mediterranean. Slovenia borders Italy to the west, Croatia to the south and east, Hungary to the northeast, and Austria to the north, and also has a small portion of...
.

The Ljubljana Town Hall
Ljubljana town hall
Ljubljana Town Hall is the town hall in Ljubljana, the capital of Slovenia. It is located on the Town Square in the city centre close to the St. Nicholas Cathedral.The original building was built by the Carniolan architect Peter Bezlaj in 1584...
is located on the square. In front of the Town Hall stands a copy of the Robba fountain. At the end of the square stands St. Nicholas Cathedral
St. Nicholas Cathedral, Ljubljana
Saint Nicholas' Cathedral , commonly referred to as the Cathedral of Saint Nicholas or Ljubljana Cathedral, is a cathedral in Ljubljana, the capital of Slovenia...
. In front of the Town Hall is the house where Gustav Mahler
Gustav Mahler
Gustav Mahler was a late-Romantic Austrian composer and one of the leading conductors of his generation. He was born in the village of Kalischt, Bohemia, in what was then Austria-Hungary, now Kaliště in the Czech Republic...
lived from 1881 to 1882 .