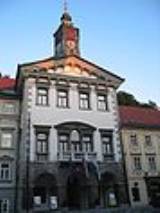 Ljubljana Town Hall is the town hall
City hall
In local government, a city hall, town hall or a municipal building or civic centre, is the chief administrative building of a city...
in Ljubljana
Ljubljana
Ljubljana is the capital of Slovenia and its largest city. It is the centre of the City Municipality of Ljubljana. It is located in the centre of the country in the Ljubljana Basin, and is a mid-sized city of some 270,000 inhabitants...
, the capital of Slovenia
Slovenia
Slovenia , officially the Republic of Slovenia , is a country in Central and Southeastern Europe touching the Alps and bordering the Mediterranean. Slovenia borders Italy to the west, Croatia to the south and east, Hungary to the northeast, and Austria to the north, and also has a small portion of...
. It is located on the Town Square
Town Square, Ljubljana
Town Square is a major square in Ljubljana, the capital of Slovenia.The Ljubljana Town Hall is located on the square. In front of the Town Hall stands a copy of the Robba fountain. At the end of the square stands St. Nicholas Cathedral. In front of the Town Hall is the house where Gustav Mahler...
in the city centre
Center (Ljubljana)
The Center District or simply Center is a city district in the center of Ljubljana, the capital of Slovenia. It has an area of about . Its major thoroughfares are Slovenian Street , Čop Street , Cankar Street , Wolf Street , Trubar Street , and Miklošič Street , and the major squares are Congress...
close to the St. Nicholas Cathedral
St. Nicholas Cathedral, Ljubljana
Saint Nicholas' Cathedral , commonly referred to as the Cathedral of Saint Nicholas or Ljubljana Cathedral, is a cathedral in Ljubljana, the capital of Slovenia...
.

The original building was built by the Carniola
Carniola
Carniola was a historical region that comprised parts of what is now Slovenia. As part of Austria-Hungary, the region was a crown land officially known as the Duchy of Carniola until 1918. In 1849, the region was subdivided into Upper Carniola, Lower Carniola, and Inner Carniola...
n architect Peter Bezlaj in 1584. Between 1717 and 1719, the building underwent a radical renovation by the architect Gregor Maček in a combination of late Baroque
Baroque
The Baroque is a period and the style that used exaggerated motion and clear, easily interpreted detail to produce drama, tension, exuberance, and grandeur in sculpture, painting, literature, dance, and music...
and Classicist
Classicism
Classicism, in the arts, refers generally to a high regard for classical antiquity, as setting standards for taste which the classicists seek to emulate. The art of classicism typically seeks to be formal and restrained: of the Discobolus Sir Kenneth Clark observed, "if we object to his restraint...
style. In the mid 1920s, a monument to the Serbian
Kingdom of Serbia
The Kingdom of Serbia was created when Prince Milan Obrenović, ruler of the Principality of Serbia, was crowned King in 1882. The Principality of Serbia was ruled by the Karađorđevic dynasty from 1817 onwards . The Principality, suzerain to the Porte, had expelled all Ottoman troops by 1867, de...
and first Yugoslav
Kingdom of Yugoslavia
The Kingdom of Yugoslavia was a state stretching from the Western Balkans to Central Europe which existed during the often-tumultuous interwar era of 1918–1941...
king Peter I was erected in the entrance of the Town Hall. The monument, designed by the architect Jože Plečnik
Jože Plecnik
Jože Plečnik , was a Slovene architect who practised in Vienna, Belgrade, Prague and Ljubljana.-Biography:...
, was removed and destroyed by the Fascist Italian
Italian Fascism
Italian Fascism also known as Fascism with a capital "F" refers to the original fascist ideology in Italy. This ideology is associated with the National Fascist Party which under Benito Mussolini ruled the Kingdom of Italy from 1922 until 1943, the Republican Fascist Party which ruled the Italian...
occupation authorities of the Province of Ljubljana
Province of Ljubljana
The Province of Ljubljana was a province of the Kingdom of Italy and of the Nazi German Adriatic Littoral during World War II. It was created on May 3, 1941 from territory occupied and annexed to Italy after the Axis invasion and dissolution of Yugoslavia, and it was abolished on May 9, 1945, when...
in April 1941.