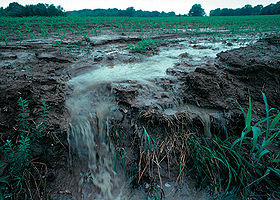 Topsoil is the upper, outermost layer of soil
Soil
Soil is a natural body consisting of layers of mineral constituents of variable thicknesses, which differ from the parent materials in their morphological, physical, chemical, and mineralogical characteristics...
, usually the top 2 inches (5.1 cm) to 8 inches (20.3 cm). It has the highest concentration of organic matter
Organic matter
Organic matter is matter that has come from a once-living organism; is capable of decay, or the product of decay; or is composed of organic compounds...
and microorganism
Microorganism
A microorganism or microbe is a microscopic organism that comprises either a single cell , cell clusters, or no cell at all...
s and is where most of the Earth
Earth
Earth is the third planet from the Sun, and the densest and fifth-largest of the eight planets in the Solar System. It is also the largest of the Solar System's four terrestrial planets...
's biological
Biology
Biology is a natural science concerned with the study of life and living organisms, including their structure, function, growth, origin, evolution, distribution, and taxonomy. Biology is a vast subject containing many subdivisions, topics, and disciplines...
soil activity occurs.

Plant
Plant
Plants are living organisms belonging to the kingdom Plantae. Precise definitions of the kingdom vary, but as the term is used here, plants include familiar organisms such as trees, flowers, herbs, bushes, grasses, vines, ferns, mosses, and green algae. The group is also called green plants or...
s generally concentrate their root
Root
In vascular plants, the root is the organ of a plant that typically lies below the surface of the soil. This is not always the case, however, since a root can also be aerial or aerating . Furthermore, a stem normally occurring below ground is not exceptional either...
s in and obtain most of their nutrient
Nutrient
A nutrient is a chemical that an organism needs to live and grow or a substance used in an organism's metabolism which must be taken in from its environment. They are used to build and repair tissues, regulate body processes and are converted to and used as energy...
s from this layer. The actual depth of the topsoil layer can be measured as the depth from the surface to the first densely packed soil layer known as subsoil
Subsoil
Subsoil, or substrata, is the layer of soil under the topsoil on the surface of the ground. The subsoil may include substances such as clay and/or sand that has only been partially broken down by air, sunlight, water, wind etc., to produce true soil...
.

In soil classification systems, topsoil is known as the "A Horizon," therefore, it is the very top layer.

A variety of soil mixtures are sold commercial
Commerce
While business refers to the value-creating activities of an organization for profit, commerce means the whole system of an economy that constitutes an environment for business. The system includes legal, economic, political, social, cultural, and technological systems that are in operation in any...
ly as topsoil, usually for use in improving garden
Garden
A garden is a planned space, usually outdoors, set aside for the display, cultivation, and enjoyment of plants and other forms of nature. The garden can incorporate both natural and man-made materials. The most common form today is known as a residential garden, but the term garden has...
s and lawn
Lawn
A lawn is an area of aesthetic and recreational land planted with grasses or other durable plants, which usually are maintained at a low and consistent height. Low ornamental meadows in natural landscaping styles are a contemporary option of a lawn...
s, e.g. container garden
Container garden
Container gardening is the practice of growing plants exclusively in containers instead of planting them in the ground. Pots, traditionally made of terracotta but now more commonly plastic, and windowboxes have been the most commonly seen. Small pots are commonly called flowerpots. In some cases,...
s, potting soil
Potting soil
The most common ingredients used in potting soil are peat moss, composted bark and/or other plant materials, sand, and perlite . Some potting soil mixtures contain particles of vermicompost, while other contain vermiculite for water retention...
and peat
Peat
Peat is an accumulation of partially decayed vegetation matter or histosol. Peat forms in wetland bogs, moors, muskegs, pocosins, mires, and peat swamp forests. Peat is harvested as an important source of fuel in certain parts of the world...
.

A major environmental concern known as topsoil erosion
Erosion
Erosion is when materials are removed from the surface and changed into something else. It only works by hydraulic actions and transport of solids in the natural environment, and leads to the deposition of these materials elsewhere...
occurs when the topsoil layer is blown or washed away. Without topsoil, little plant life is possible. The estimated annual costs of public and environmental health losses related to soil erosion exceed $45 billion. Conventional agriculture encourages the depletion of topsoil because the soil must be plowed and replanted each year. Sustainable techniques attempt to slow erosion through the use of cover crops in order to build organic matter in the soil. The United States alone loses 2 billion tons of topsoil per year. This is of great ecological concern as one inch of topsoil can take 500 years to form naturally. However, farmer and engineer P. A. Yeomans
P. A. Yeomans
Percival Alfred Yeomans was an Australian inventor known for the Keyline system for the development of land and increasing the fertility of that land. As a mining engineer and gold assayer, Yeomans had developed a keen sense of hydrology and equipment design...
developed a technique known as Keyline design
Keyline Design
Keyline design is a technique for maximizing beneficial use of water resources of a piece of land. The Keyline refers to a specific topographic feature linked to water flow...
, which has been proven to convert subsoil into topsoil much faster; Yeomans published a book, called Water For Every Farm, in 1954 about the technique.