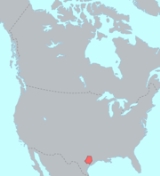 Encyclopedia
The Tonkawa language was spoken in Oklahoma
Oklahoma
Oklahoma is a state located in the South Central region of the United States of America. With an estimated 3,751,351 residents as of the 2010 census and a land area of 68,667 square miles , Oklahoma is the 28th most populous and 20th-largest state...
, Texas
Texas
Texas is the second largest U.S. state by both area and population, and the largest state by area in the contiguous United States.The name, based on the Caddo word "Tejas" meaning "friends" or "allies", was applied by the Spanish to the Caddo themselves and to the region of their settlement in...
, and New Mexico
New Mexico
New Mexico is a state located in the southwest and western regions of the United States. New Mexico is also usually considered one of the Mountain States. With a population density of 16 per square mile, New Mexico is the sixth-most sparsely inhabited U.S...
by the Tonkawa
Tonkawa
The Tickanwa•tic Tribe , better known as the Tonkawa , are a Native American people indigenous to present-day Oklahoma and Texas. They once spoke the now-extinct Tonkawa language believed to have been a language isolate not related to any other indigenous tongues...
people. A language isolate
Language isolate
A language isolate, in the absolute sense, is a natural language with no demonstrable genealogical relationship with other languages; that is, one that has not been demonstrated to descend from an ancestor common with any other language. They are in effect language families consisting of a single...
, with no known related languages, Tonkawa is now extinct. Members of the Tonkawa tribe now speak only English
English language
English is a West Germanic language that arose in the Anglo-Saxon kingdoms of England and spread into what was to become south-east Scotland under the influence of the Anglian medieval kingdom of Northumbria...
.

The Tonkawa language is a syllabic language that bases its word and sentence prosody on even stressed syllables.
There are five types of syllabe arrangements: (C - consonant CC - consonant cluster V - vowel)

Tonkawa has 10 vowel
Vowel
In phonetics, a vowel is a sound in spoken language, such as English ah! or oh! , pronounced with an open vocal tract so that there is no build-up of air pressure at any point above the glottis. This contrasts with consonants, such as English sh! , where there is a constriction or closure at some...
s:

There are two environments in which consonant clusters occur in Tonkawa:
Repeated or Identical Consonants are treated as one unit, however, the condition that causes this repetition has not been fully analyzed.
There are cases where the glottal stop is not used in the cluster or combination
There are certain consonants that can either begin or end in a cluster. However if the cluster begins the syllable, there can be no intervening vowel.

Final Stem Syllables
An interesting feature of Tonkawan phonology is that the vowels in even-numbered syllables are reduced. That is, long vowels are shortened, while short vowels disappear. Analyses of this were given by Kisseberth (1970), Phelps (1973, 1975) and Noske (1993).

Morphological terms that are important for Tonkawa:
These are distinguished by hyphens. Example: ka-la 'mouth
The morphemes in Tonkawa can be divided as follows:

I. Themes
In Tonkawa the them is composed of morphologic units. The basic unit is the stem. The stem is composed of two elements (the consonant and vowel) and modified by affixes. The theme, or stem, is functional, which means it changes as more affixation is added. This leads to the fusion of the stem and affix where it becomes difficult to isolate the word into its smaller units.

Unlike English, where the pronouns, nouns, verbs, etc. are individual words, Tonkawa forms these parts of speech in a different manner. In Tonkawa, the most important grammatical function is affixation. This process shows the subjects, objects, and pronouns of words and/or verbs. Within affixations, the suffix has more importance than the prefix.

The differenation between subject and object is shown in the word ending, aka the suffix. While the word order tends to be subject, object, verb (SOV), compounding words is very common in Tonkawa. Reduplication is very common in Tonkawa and affects only the verb themes. Usually only one syllable is duplicated, and this duplication symbolizes a repeated action, vigorous action, or a plural subject.

Nouns function as free themes, or stems, in Tonkawa. There is a limit of only two or three affixes that can compound with a noun. However, there are cases were a bound theme can occur in noun compounds. This occurs with the suffix -an is added. In English, pronouns and nouns are usually grouped together, but because pronouns in Tonkawa are bound themes, they will be discussed with the verb section.
Noun Suffixes

Verbs are bound morphemes that have a limit of only two themes, of which the 2nd theme is the modifying theme. The 2nd theme usually serves an adverbial theme. However if the suffix -ʔe/-wa is added the verb functions as a free theme.
Pronouns

Pronouns are only used for emphasis on the subject and are affixated as prefixes. Person and number are usually indicated by the affixation of the verb. Most pronouns are bound themes, especially the demonstrative pronouns.

Indefinite pronouns can also be formed with affixation. (Interrogative + ʔax)
Example: hecu: 'what' + ʔax = hecu:-ʔax 'anything, something, anyone, someone'

Verb suffixes are important in Tonkaway because they usually indicate the tense, negativity, and manner of the action performed.

Enclitics are bound morphemes that are suffixed to verbs, nouns, and demonstratives that end with -k. Enclitics often express modal concepts in Tonkawa, which occur in the declarative, interrogative, and quotative/narrative clauses or statements.

The phonemic orthography used in Hoijer's Tonkawa Texts is a later version of Americanist transcription. It uses a colon for long vowels < : > and the traditional glottal stop symbol < ʔ >.
some of the examples of it would be like salt it is called mummun and peper is mummunchicew

The following text is the first four sentences of Coyote and Jackrabbit, from Hoijer's Tonkawa Texts.

In this gloss, S is an abbreviation for "it is said", and afm for "the aforementioned".