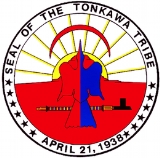 Encyclopedia
The Tickanwa•tic Tribe better known as the Tonkawa (derived from the Waco tribal word, Tonkaweya, meaning "they all stay together"), are a Native American
Native Americans in the United States
Native Americans in the United States are the indigenous peoples in North America within the boundaries of the present-day continental United States, parts of Alaska, and the island state of Hawaii. They are composed of numerous, distinct tribes, states, and ethnic groups, many of which survive as...
people indigenous to present-day Oklahoma
Oklahoma
Oklahoma is a state located in the South Central region of the United States of America. With an estimated 3,751,351 residents as of the 2010 census and a land area of 68,667 square miles , Oklahoma is the 28th most populous and 20th-largest state...
and Texas
Texas
Texas is the second largest U.S. state by both area and population, and the largest state by area in the contiguous United States.The name, based on the Caddo word "Tejas" meaning "friends" or "allies", was applied by the Spanish to the Caddo themselves and to the region of their settlement in...
. They once spoke the now-extinct
Extinct language
An extinct language is a language that no longer has any speakers., or that is no longer in current use. Extinct languages are sometimes contrasted with dead languages, which are still known and used in special contexts in written form, but not as ordinary spoken languages for everyday communication...
Tonkawa language
Tonkawa language
The Tonkawa language was spoken in Oklahoma, Texas, and New Mexico by the Tonkawa people. A language isolate, with no known related languages, Tonkawa is now extinct...
believed to have been a language isolate
Language isolate
A language isolate, in the absolute sense, is a natural language with no demonstrable genealogical relationship with other languages; that is, one that has not been demonstrated to descend from an ancestor common with any other language. They are in effect language families consisting of a single...
not related to any other indigenous tongues. The headquarters of the federally recognized tribe is Tonkawa, Oklahoma
Tonkawa, Oklahoma
Tonkawa is a city in Kay County, Oklahoma, United States, along the Salt Fork Arkansas River. The population was 3,299 at the 2000 census.-History:...
.

In the 15th century, the Tonkawa Tribe probably numbered around 5,000 with their numbers diminishing to around 1,600 by the late 17th century due to disease and waring with other tribes, most notably the pache]. By 1921, only 34 tribal members remained but their numbers have since recovered to close to 600, most of whom live in Oklahoma.

Scholars used to think the Tonkawa originated in central Texas
Central Texas
Central Texas , is a region in the U.S. state of Texas. It is roughly bordered by San Marcos to Fredericksburg to Waco, and to Brenham, and includes the Austin–Round Rock, Killeen-Temple-Fort Hood, Bryan-College Station, and Waco metropolitan areas...
. Recent research, however, has shown that the tribe inhabited northeastern Oklahoma in 1601. By 1700, the stronger and more aggressive Apache
Apache
Apache is the collective term for several culturally related groups of Native Americans in the United States originally from the Southwest United States. These indigenous peoples of North America speak a Southern Athabaskan language, which is related linguistically to the languages of Athabaskan...
had pushed the Tonkawa south to the Red River
Red River (Mississippi watershed)
The Red River, or sometimes the Red River of the South, is a major tributary of the Mississippi and Atchafalaya Rivers in the southern United States of America. The river gains its name from the red-bed country of its watershed. It is one of several rivers with that name...
which forms the border between current-day Oklahoma and Texas. 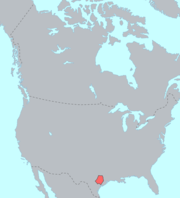 The tribe continued their southern migration into Texas and northern Mexico
Mexico
The United Mexican States , commonly known as Mexico , is a federal constitutional republic in North America. It is bordered on the north by the United States; on the south and west by the Pacific Ocean; on the southeast by Guatemala, Belize, and the Caribbean Sea; and on the east by the Gulf of...
where they allied with the Lipan Apache.

In 1824, the Tonkawa entered into a treaty with Stephen F. Austin
Stephen F. Austin
Stephen Fuller Austin was born in Virginia and raised in southeastern Missouri. He was known as the Father of Texas, led the second, but first legal and ultimately successful colonization of the region by bringing 300 families from the United States. The capital of Texas, Austin in Travis County,...
(the Father of epublic of Texas|Texas), pledging their support against the Comanche Tribe
Comanche
The Comanche are a Native American ethnic group whose historic range consisted of present-day eastern New Mexico, southern Colorado, northeastern Arizona, southern Kansas, all of Oklahoma, and most of northwest Texas. Historically, the Comanches were hunter-gatherers, with a typical Plains Indian...
. In 1840 at the Battle of Plum Creek
Battle of Plum Creek
The Battle of Plum Creek was a clash between militia and Rangers of the Republic of Texas and a huge Comanche war party under Chief Buffalo Hump, which took place near Lockhart, Texas, on August 12, 1840, following the Great Raid of 1840 as the Comanche war party returned to West...
and again in 1858 at the Battle of Little Robe Creek
Battle of Little Robe Creek
The Battle of Little Robe Creek, also called the Battle of Antelope Hills, took place on May 12, 1858. It actually was a series of three distinct encounters that took place on a single day, between the Comanches on the one side, and Texas Rangers, militia, and allied Tonkawas attacking them...
, the Tonkawa fought alongside the Texas Rangers
Texas Ranger Division
The Texas Ranger Division, commonly called the Texas Rangers, is a law enforcement agency with statewide jurisdiction in Texas, and is based in Austin, Texas...
against the Comanche.

In October 1884, the federal government relocated more than 90 Tonkawa from their lands on the Brazos River
Brazos River
The Brazos River, called the Rio de los Brazos de Dios by early Spanish explorers , is the longest river in Texas and the 11th longest river in the United States at from its source at the head of Blackwater Draw, Curry County, New Mexico to its mouth at the Gulf of Mexico with a drainage...
Reservation in Texas to lands north of Texas referred to as the Indian Territory
Indian Territory
The Indian Territory, also known as the Indian Territories and the Indian Country, was land set aside within the United States for the settlement of American Indians...
. During the train journey which began in Cisco, Texas
Cisco, Texas
Cisco is a city in Eastland County, Texas, United States. The population was 3,851 at the 2000 census.-History:Conrad Hilton started the Hilton Hotel chain with a single hotel bought in Cisco. Hilton came to Cisco to buy a bank, but the bank cost too much; so he purchased the Mobley Hotel in 1919...
, a Tonkawa baby was born en route and was given the name, "Railroad Cisco".

The Tonkawa were actually made up of various groups, many of which are no longer known by name. The following groups are generally counted as Tonkawa:

The Tonkawa Tribe is headquartered in Tonkawa, Oklahoma
Tonkawa, Oklahoma
Tonkawa is a city in Kay County, Oklahoma, United States, along the Salt Fork Arkansas River. The population was 3,299 at the 2000 census.-History:...
, and their tribal jurisdictional area is in Kay County
Kay County, Oklahoma
Kay County is a county located in the U.S. state of Oklahoma. As of 2000, the population was 48,080. Its county seat is Newkirk. The largest city in Kay County is Ponca City.-19th century:...
. They have 593 enrolled tribal members, with 476 living in Oklahoma. Donald L. Patterson is currently serving a three-year term as the tribe's elected president.

The Tonkawa Tribe operates a number of businesses which have an annual economic impact of over $16 million. Along with several smoke shops, the tribe runs both the Tonkawa Indian Casino located in Tonkawa, Oklahoma, and the Native Lights Casino in Newkirk, Oklahoma
Newkirk, Oklahoma
Newkirk is a city in Kay County, Oklahoma, United States. The population was 2,243 at the 2000 census. It is the county seat of Kay County.-Geography:...
.

The annual Tonkawa Pow Wow
Pow woW
Pow woW is French musical group. Their biggest hit was "Le Chat" in 1992. Their next single was the French version of song "The Lion Sleeps Tonight", titled "Le lion est mort ce soir".- Albums :* Regagner les plaines...
is held annually on the last weekend in June to commemorate the end of the tribe's own Trail of Tears
Trail of Tears
The Trail of Tears is a name given to the forced relocation and movement of Native American nations from southeastern parts of the United States following the Indian Removal Act of 1830...
when the tribe was forcefully removed and relocated from its traditional lands to present-day Oklahoma.