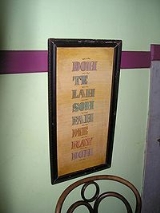 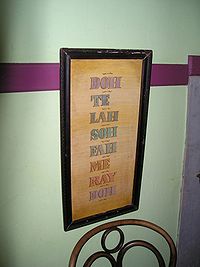 Tonic sol-fa is a pedagogical technique for teaching sight-singing, invented by Sarah Ann Glover
Sarah Ann Glover
Sarah Ann Glover was an English music educator who invented the Norwich sol-fa system.-Life and career:Glover was born in The Close, Norwich. Her father became Curate of St Laurence's Church, Norwich in 1811, and she developed her learning system to aid teachers with a cappella singing...
(1785–1867) of Norwich, England and popularised by John Curwen
John Curwen
Reverend John Curwen was an English Congregationalist minister, and founder of the Tonic sol-fa system of music education. He was educated at Wymondley College and University College London.-Tonic sol-fa:...
who adapted it from a number of earlier musical systems. It uses a system of musical notation based on movable do solfège
Solfege
In music, solfège is a pedagogical solmization technique for the teaching of sight-singing in which each note of the score is sung to a special syllable, called a solfège syllable...
, whereby every tone is given a name according to its relationship with other tones in the key: the usual staff notation is replaced with anglicized solfège syllables (e.g. do, re, mi, fa, sol, la, ti, do) or their abbreviations (d,r,m,f,s,l,t,d). "Do" is chosen to be the tonic
Tonic (music)
In music, the tonic is the first scale degree of the diatonic scale and the tonal center or final resolution tone. The triad formed on the tonic note, the tonic chord, is thus the most significant chord...
of whatever key is being used (thus the terminology moveable Do). The original Solfege sequence started with "Ut" which later became "Do".

By the end of the nineteenth century, this notation was very widespread in Britain, and it became standard practice to sell sheet music (for popular songs) with the tonic sol-fa notation included.

When John Windet printed the 1594 edition of the Sternhold and Hopkins Psalter, he added the initials of the six syllables of Guido (U, R, M, F, S, L) underneath the note. Windet explained, "...I have caused a new print of note to be made with letter to be joined to every note: whereby thou mayest know how to call every note by his right name, so that with a very little diligence thou mayest more easilie by the viewing of these letters, come to the knowledge of perfect solfeying..." Rousseau, Curwen and others would have been aware of this popular psalter
Psalter
A psalter is a volume containing the Book of Psalms, often with other devotional material bound in as well, such as a liturgical calendar and litany of the Saints. Until the later medieval emergence of the book of hours, psalters were the books most widely owned by wealthy lay persons and were...
.

B. C. Unseld
Benjamin Carl Unseld
Benjamin Carl Unseld , better known as B. C. Unseld, was a U.S. gospel music teacher, composer, and publisher.-Biography:...
and Theodore F. Seward, with Biglow and Main publishers, imported Curwen's tonic sol-fa to the United States
United States
The United States of America is a federal constitutional republic comprising fifty states and a federal district...
, though the method was never widely received. Prior to this, the 9th edition of the Bay Psalm Book
Bay Psalm Book
The Bay Psalm Book was the first book, that is still in existence, printed in British North America.The book is a Psalter, first printed in 1640 in Cambridge, Massachusetts. The Psalms in it are metrical translations into English...
(Boston, USA) had appeared with the initials of four-note syllables (fa, sol, la, me) underneath the staff. Reverend John Tufts
John Tufts
John Tufts may refer to:*John Q. Tufts , American politician*John Tufts , early music educator...
, in his An Introduction to the Singing of Psalm Tunes in a Plaine & Easy Method, moved the initials of the four-note syllables onto the staff in place of "regular notes", and indicated rhythm by punctuation marks to the right of the letters. These may be considered American forerunners of Curwen's system, though he may not have been aware of them. Tufts' Introduction was popular, going through several editions. Nevertheless, his work probably did more to pave the way for shape note
Shape note
Shape notes are a music notation designed to facilitate congregational and community singing. The notation, introduced in 1801, became a popular teaching device in American singing schools...
s. When Unseld and Steward introduced tonic sol-fa in the late 1800s, it was considered "something new".

Zoltán Kodály
Zoltán Kodály
Zoltán Kodály was a Hungarian composer, ethnomusicologist, pedagogue, linguist, and philosopher. He is best known internationally as the creator of the Kodály Method.-Life:Born in Kecskemét, Kodály learned to play the violin as a child....
(1882–1967) of Hungary
Hungary
Hungary , officially the Republic of Hungary , is a landlocked country in Central Europe. It is situated in the Carpathian Basin and is bordered by Slovakia to the north, Ukraine and Romania to the east, Serbia and Croatia to the south, Slovenia to the southwest and Austria to the west. The...
championed the system in more modern times, building on Curwen's work. He introduced a set of hand signals which correspond to each solfège syllable.

In 1972 Roberto Goitre
Roberto Goitre
Roberto Goitre was an Italian choirmaster, composer and teacher.Upon concluding his academic studies, he dedicated himself to choral conducting and, at the beginning of the 1960s, on an invite by Marcello Abbado, he became the conductor of the choir at the "Giuseppe Nicolini" Conservatoire in...
printed one of the most important modern versions of the method in Cantar Leggendo with the moveable Do.

Solmization that represents the functions of pitches (such as tonic sol-fa) is called "functional" solmization. All musicians that use functional solmization use "do" to represent the tonic (also known as the "keynote") in the major mode. However, approaches to the minor mode fall into two camps. Some musicians use "do" to represent the tonic in minor (a parallel approach), whereas others prefer to label the tonic in minor as "la" (a relative approach) Both systems have their advantages: The former system more directly represents the scale-degree functions of the pitches in a key; the latter more directly represents the intervals between pitches in any given key signature.