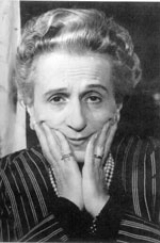 Encyclopedia
Titina De Filippo, born Annunziata De Filippo (27 March 1898 - 26 December 1963) was an Italian
Italy
Italy , officially the Italian Republic languages]] under the European Charter for Regional or Minority Languages. In each of these, Italy's official name is as follows:;;;;;;;;), is a unitary parliamentary republic in South-Central Europe. To the north it borders France, Switzerland, Austria and...
actress and playwright

She was born in via Dell'Ascensione a Chiaia, Naples
Naples
Naples is a city in Southern Italy, situated on the country's west coast by the Gulf of Naples. Lying between two notable volcanic regions, Mount Vesuvius and the Phlegraean Fields, it is the capital of the region of Campania and of the province of Naples...
, the oldest of three children born from the extramarital relationship between Luisa De Filippo and Eduardo Scarpetta
Eduardo Scarpetta
Eduardo Scarpetta was an Italian actor and playwright from Naples. Although not from a theatrical family, he was on the stage by the age of four and is today best remembered as the creator of a character that became his stage alter-ego: Felice Sciosciammocca, a typical, good-natured Neapolitan...
, a well-respected playwright in Naples. The children became known as "Children of the buttons" since their mother was a seamstress to his company: apart Titina, they include actor Peppino
Peppino De Filippo
Peppino De Filippo was an Italian actor.De Filippo was born in Naples, brother of actor and playwright Eduardo De Filippo and of Titina. He made his stage debut at the age of six. He played in several movies such as Rome-Paris-Rome, Variety Lights, A Day in Court, Ferdinand I, King of Naples and...
and playwright and director Eduardo De Filippo
Eduardo De Filippo
Eduardo De Filippo was an Italian actor, playwright, screenwriter, author and poet, best known for his Neapolitan works Filumena Marturano and Napoli Milionaria.-Biography:...
.

Titina De Filippo studied music and learned French as a child. She made her stage debut at the age of seven.