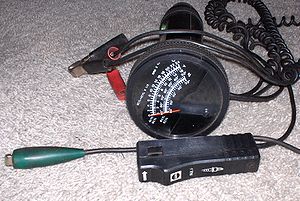 The timing light is connected to the ignition circuit and used to illuminate the timing mark
Timing mark
A timing mark is an indicator used for setting the timing of the ignition system of an engine, typically found on the crankshaft pulley or the flywheel, being the largest radius rotating at crankshaft speed and therefore the place where marks at one degree intervals will be farthest apart.On older...
s on the engine's crankshaft
Crankshaft
The crankshaft, sometimes casually abbreviated to crank, is the part of an engine which translates reciprocating linear piston motion into rotation...
pulley or flywheel
Flywheel
A flywheel is a rotating mechanical device that is used to store rotational energy. Flywheels have a significant moment of inertia, and thus resist changes in rotational speed. The amount of energy stored in a flywheel is proportional to the square of its rotational speed...
, with the engine running. The apparent position of the marks, frozen by the stroboscopic effect, indicates the current timing of the spark in relation to piston position. A reference pointer is attached to the flywheel housing or other fixed point, and an engraved scale gives the offset between the spark time and the top-dead-centre position of the piston in the cylinder. The distributor can be rotated slightly until the reference pointer aligns with the specified point on the timing scale. Fuel-injected engines, or engines with microprocessor controls may require special procedures to allow basic spark timing to be observed without control effects from the engine computer. On most automotive engines, the timing is set based on the #1 cylinder. In few cases an engine is timed off another cylinder, such as the International Harvester
International Harvester
International Harvester Company was a United States agricultural machinery, construction equipment, vehicle, commercial truck, and household and commercial products manufacturer. In 1902, J.P...
V8 gas engines, which use #8, and the Isuzu
Isuzu
, is a Japanese car, commercial vehicle and heavy truck manufacturing company, headquartered in Tokyo. In 2005, Isuzu became the world's largest manufacturer of medium to heavy duty trucks. It has assembly and manufacturing plants in the Japanese city of Fujisawa, as well as in the prefectures...
4Z series four-cylinder, which is timed off the #4 cylinder.

Simple timing lights may just contain a neon lamp
Neon lamp
A neon lamp is a miniature gas discharge lamp that typically contains neon gas at a low pressure in a glass capsule. Only a thin region adjacent to the electrodes glows in these lamps, which distinguishes them from the much longer and brighter neon tubes used for signage...
operated by the energy provided by the ignition circuit. Timing lights using xenon strobe lamps electronically triggered by the spark provide brighter light, allowing use of the timing lamp under normal shop lighting or daylight conditions.