Overview
A voltmeter is an instrument used for measuring electrical potential difference between two points in an electric circuit. Analog voltmeters move a pointer across a scale in proportion to the voltage of the circuit; digital voltmeters give a numerical display of voltage by use of an analog to digital converter.

Voltmeters are made in a wide range of styles. Instruments permanently mounted in a panel are used to monitor generators or other fixed apparatus.

HOW DOES MULTIMETERS WORK

Who invented the voltmeter?
More A voltmeter is an instrument used for measuring electrical potential difference between two points in an electric circuit. Analog voltmeters move a pointer across a scale in proportion to the voltage of the circuit; digital voltmeters give a numerical display of voltage by use of an analog to digital converter.

Voltmeters are made in a wide range of styles. Instruments permanently mounted in a panel are used to monitor generators or other fixed apparatus. Portable instruments, usually equipped to also measure current and resistance in the form of a multimeter
Multimeter
A multimeter or a multitester, also known as a VOM , is an electronic measuring instrument that combines several measurement functions in one unit. A typical multimeter may include features such as the ability to measure voltage, current and resistance...
, are standard test instruments used in electrical and electronics work. Any measurement that can be converted to a voltage can be displayed on a meter that is suitably calibrated; for example, pressure, temperature, flow or level in a chemical process plant.

General purpose analog voltmeters may have an accuracy of a few percent of full scale, and are used with voltages from a fraction of a volt to several thousand volts. Digital meters can be made with high accuracy, typically better than 1%. Specially calibrated test instruments have higher accuracies, with laboratory instruments capable of measuring to accuracies of a few parts per million. Meters using amplifier
Amplifier
Generally, an amplifier or simply amp, is a device for increasing the power of a signal.In popular use, the term usually describes an electronic amplifier, in which the input "signal" is usually a voltage or a current. In audio applications, amplifiers drive the loudspeakers used in PA systems to...
s can measure tiny voltages of microvolts or less.

Part of the problem of making an accurate voltmeter is that of calibration to check its accuracy. In laboratories, the Weston Cell
Weston cell
The Weston cell, invented by Edward Weston in 1893, is a wet-chemical cell that produces a highly stable voltage suitable as a laboratory standard for calibration of voltmeters...
is used as a standard voltage for precision work. Precision voltage references are available based on electronic circuits. 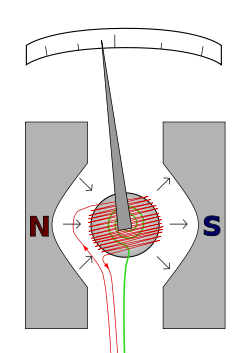 A moving coil galvanometer
Galvanometer
A galvanometer is a type of ammeter: an instrument for detecting and measuring electric current. It is an analog electromechanical transducer that produces a rotary deflection of some type of pointer in response to electric current flowing through its coil in a magnetic field. .Galvanometers were...
can be used as a voltmeter by inserting a resistor in series with the instrument. It employs a small coil of fine wire suspended in a strong magnetic field. When an electric current is applied, the galvanometer's indicator rotates and compresses a small spring. The angular rotation is proportional to the current through the coil. For use as a voltmeter, a series resistance is added so that the angular rotation becomes proportional to the applied voltage.

One of the design objectives of the instrument is to disturb the circuit as little as possible and so the instrument should draw a minimum of current to operate. This is achieved by using a sensitive ammeter
Ammeter
An ammeter is a measuring instrument used to measure the electric current in a circuit. Electric currents are measured in amperes , hence the name. Instruments used to measure smaller currents, in the milliampere or microampere range, are designated as milliammeters or microammeters...
or microammeter in series with a high resistance.

Moving-coil instruments with a permanent-magnet field respond only to direct current. Measurement of AC voltage requires a rectifier
Rectifier
A rectifier is an electrical device that converts alternating current , which periodically reverses direction, to direct current , which flows in only one direction. The process is known as rectification...
in the circuit so that the coil deflects in only one direction. Moving-coil instruments are also made with the zero position in the middle of the scale instead of at one end; these are useful if the voltage reverses its polarity.

The sensitivity and input resistance of a voltmeter can be increased if the current required to deflect the meter pointer is supplied by an amplifier and power supply instead of by the circuit under test. The electronic amplifier between input and meter gives two benefits; a rugged moving coil instrument can be used, since its sensitivity need not be high, and the input resistance can be made high, reducing the current drawn from the circuit under test. Amplified voltmeters often have an input resistance of 1, 10, or 20 megohms which is independent of the range selected. A once-popular form of this instrument used a vacuum tube in the amplifer circuit and so was called the vacuum tube voltmeter, or VTVM. These were almost always powered by the local AC line current and so were not particularly portable. Today these circuits use a solid-state amplifier using field-effect transistor
Field-effect transistor
The field-effect transistor is a transistor that relies on an electric field to control the shape and hence the conductivity of a channel of one type of charge carrier in a semiconductor material. FETs are sometimes called unipolar transistors to contrast their single-carrier-type operation with...
s, hence FET-VM, and appear in handheld digital multimeters
Multimeter
A multimeter or a multitester, also known as a VOM , is an electronic measuring instrument that combines several measurement functions in one unit. A typical multimeter may include features such as the ability to measure voltage, current and resistance...
as well as in bench and laboratory instruments. These are now so ubiquitous that they have largely replaced non-amplified multimeters except in the least expensive price ranges.

Most VTVMs and FET-VMs handle DC voltage, AC voltage, and resistance measurements; modern FET-VMs add current measurements and often other functions as well. A specialized form of the VTVM or FET-VM is the AC voltmeter. These instruments are optimized for measuring AC voltage. They have much wider bandwidth and better sensitivity than a typical multifunction device. The first digital voltmeter was invented and produced by Andrew Kay
Andrew Kay
Andrew F. Kay was President and CEO of Kay Computers, a personal computer firm, and also serves as Senior Business Advisor to Accelerated Composites, LLC....
of Non-Linear Systems (and later founder of Kaypro
Kaypro
Kaypro Corporation, commonly called Kaypro, was an American home/personal computer manufacturer of the 1980s. The company was founded by Non-Linear Systems to develop computers to compete with the then-popular Osborne 1 portable microcomputer...
) in 1954.

Digital voltmeters (DVMs) are usually designed around a special type of analog-to-digital converter
Analog-to-digital converter
An analog-to-digital converter is a device that converts a continuous quantity to a discrete time digital representation. An ADC may also provide an isolated measurement...
called an integrating converter
Integrating ADC
An integrating ADC is a type of analog-to-digital converter that converts an unknown input voltage into a digital representation through the use of an integrator. In its most basic implementation, the unknown input voltage is applied to the input of the integrator and allowed to ramp for a fixed...
. Voltmeter accuracy is affected by many factors, including temperature and supply voltage variations. To ensure that a digital voltmeter's reading is within the manufacturer's specified tolerances, they should be periodically calibrated against a voltage standard
Voltage reference
A voltage reference is an electronic device that produces a fixed voltage irrespective of the loading on the device, power supply variations, temperature changes, and the passage of time. Voltage references are used in power supply voltage regulators, analog-to-digital converters and...
such as the Weston cell
Weston cell
The Weston cell, invented by Edward Weston in 1893, is a wet-chemical cell that produces a highly stable voltage suitable as a laboratory standard for calibration of voltmeters...
.

Digital voltmeters necessarily have input amplifiers, and, like vacuum tube voltmeters, generally have a constant input resistance of 10 megohms regardless of set measurement range.