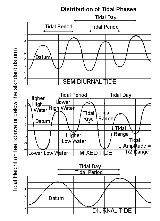 Overview
Tidal power, also called tidal energy, is a form of hydropower
Hydropower
Hydropower, hydraulic power, hydrokinetic power or water power is power that is derived from the force or energy of falling water, which may be harnessed for useful purposes. Since ancient times, hydropower has been used for irrigation and the operation of various mechanical devices, such as...
that converts the energy of tide
Tide
Tides are the rise and fall of sea levels caused by the combined effects of the gravitational forces exerted by the moon and the sun and the rotation of the Earth....
s into useful forms of power - mainly electricity.

Although not yet widely used, tidal power has potential for future electricity generation
Electricity generation
Electricity generation is the process of generating electric energy from other forms of energy.The fundamental principles of electricity generation were discovered during the 1820s and early 1830s by the British scientist Michael Faraday...
. Tides are more predictable than wind energy
Wind energy
Wind energy is the kinetic energy of air in motion; see also wind power.Total wind energy flowing through an imaginary area A during the time t is:E = ½ m v2 = ½ v 2...
and solar power
Solar power
Solar energy, radiant light and heat from the sun, has been harnessed by humans since ancient times using a range of ever-evolving technologies. Solar radiation, along with secondary solar-powered resources such as wind and wave power, hydroelectricity and biomass, account for most of the available...
. Among sources of renewable energy
Renewable energy
Renewable energy is energy which comes from natural resources such as sunlight, wind, rain, tides, and geothermal heat, which are renewable . About 16% of global final energy consumption comes from renewables, with 10% coming from traditional biomass, which is mainly used for heating, and 3.4% from...
, tidal power has traditionally suffered from relatively high cost and limited availability of sites with sufficiently high tidal ranges or flow velocities, thus constricting its total availability.

Who was the first person to use tidal power?

Is tidal power good? how does it work?

How to calculate the velocity of tides?

If tidal power was brought in in a big way, would A the earth stop moving,...B we have no more fish? This is a very damaging technology in these two i...
More

Why does tidal power have so much potential?

What are some of the ways tidal power generated?

What are the key qualities of the location of a tidal power plant?

What are some of the drawbacks of tidal power?

Is tidal power a recent discovery or has it been around for a while?

Do you think tidal power is an energy source ignored?
More
x