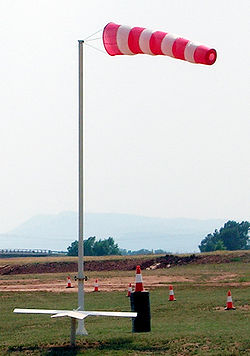 Wind energy is the kinetic energy
Kinetic energy
The kinetic energy of an object is the energy which it possesses due to its motion.It is defined as the work needed to accelerate a body of a given mass from rest to its stated velocity. Having gained this energy during its acceleration, the body maintains this kinetic energy unless its speed changes...
of air in motion; see also wind power
Wind power
Wind power is the conversion of wind energy into a useful form of energy, such as using wind turbines to make electricity, windmills for mechanical power, windpumps for water pumping or drainage, or sails to propel ships....
.

Total wind energy flowing through an imaginary area A during the time t is:

where v is the wind speed
Speed
In kinematics, the speed of an object is the magnitude of its velocity ; it is thus a scalar quantity. The average speed of an object in an interval of time is the distance traveled by the object divided by the duration of the interval; the instantaneous speed is the limit of the average speed as...
; ρ is the air density
Density
The mass density or density of a material is defined as its mass per unit volume. The symbol most often used for density is ρ . In some cases , density is also defined as its weight per unit volume; although, this quantity is more properly called specific weight...
; (A * v * t) is the volume of air passing through A (which is considered perpendicular to the direction of the wind); (A * v * t * ρ) is therefore the mass m passing per unit time. Note that ( ½ ρ * v2) is the kinetic energy of the moving air per unit volume.
Power is energy per unit time, so the wind power incident on A (e.g. equal to the rotor area of a wind turbine) is:

Wind power in an open air stream is thus proportional to the third power of the wind speed; the available power increases eightfold when the wind speed doubles. Wind turbines for grid electricity therefore need to be especially efficient at greater wind speeds.


History of usage by humans

The wind has been used for thousands of years as a source of energy. Sailors capture it in the sails of their ships, and weather has therefore had important historical consequences, for example, the Spanish Armada
Spanish Armada
This article refers to the Battle of Gravelines, for the modern navy of Spain, see Spanish NavyThe Spanish Armada was the Spanish fleet that sailed against England under the command of the Duke of Medina Sidonia in 1588, with the intention of overthrowing Elizabeth I of England to stop English...
was defeated with the help of stormy weather around the British Isles
British Isles
The British Isles are a group of islands off the northwest coast of continental Europe that include the islands of Great Britain and Ireland and over six thousand smaller isles. There are two sovereign states located on the islands: the United Kingdom of Great Britain and Northern Ireland and...
. The Netherlands
Netherlands
The Netherlands is a constituent country of the Kingdom of the Netherlands, located mainly in North-West Europe and with several islands in the Caribbean. Mainland Netherlands borders the North Sea to the north and west, Belgium to the south, and Germany to the east, and shares maritime borders...
are famous for the use of windmill
Windmill
A windmill is a machine which converts the energy of wind into rotational energy by means of vanes called sails or blades. Originally windmills were developed for milling grain for food production. In the course of history the windmill was adapted to many other industrial uses. An important...
s with four cloth sails. These were used for pumping water to drain polders forming agricultural land. In the UK
United Kingdom
The United Kingdom of Great Britain and Northern IrelandIn the United Kingdom and Dependencies, other languages have been officially recognised as legitimate autochthonous languages under the European Charter for Regional or Minority Languages...
, Norfolk
Norfolk
Norfolk is a low-lying county in the East of England. It has borders with Lincolnshire to the west, Cambridgeshire to the west and southwest and Suffolk to the south. Its northern and eastern boundaries are the North Sea coast and to the north-west the county is bordered by The Wash. The county...
borrowed this Dutch expertise to do the same, leaving distinctive features on the flat lowland landscape.

Total wind power could be captured only if the wind velocity is reduced to zero. In a realistic wind turbine this is impossible, as the captured air must also leave the turbine. A relation between the input and output wind velocity must be considered. Using the concept of stream tube, the maximal achievable extraction of wind power by a wind turbine is 59% of the total theoretical wind power (see: Betz' law
Betz' law
Betz's law is a theory about the maximum possible energy to be derived from a "hydraulic wind engine", or a wind turbine such as the Éolienne Bollée , the Eclipse Windmill , and the Aermotor...
).

Further insufficiencies, such as rotor blade friction
Friction
Friction is the force resisting the relative motion of solid surfaces, fluid layers, and/or material elements sliding against each other. There are several types of friction:...
and drag
Drag (physics)
In fluid dynamics, drag refers to forces which act on a solid object in the direction of the relative fluid flow velocity...
, gearbox losses, generator and converter losses, reduce the power delivered by a wind turbine. The basic relation that the turbine power is (approximately) proportional to the third power of velocity remains.