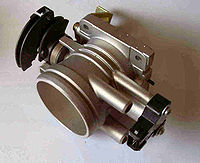 A throttle position sensor (TPS) is a sensor
Sensor
A sensor is a device that measures a physical quantity and converts it into a signal which can be read by an observer or by an instrument. For example, a mercury-in-glass thermometer converts the measured temperature into expansion and contraction of a liquid which can be read on a calibrated...
used to monitor the position of the throttle
Throttle
A throttle is the mechanism by which the flow of a fluid is managed by constriction or obstruction. An engine's power can be increased or decreased by the restriction of inlet gases , but usually decreased. The term throttle has come to refer, informally and incorrectly, to any mechanism by which...
in an internal combustion engine
Internal combustion engine
The internal combustion engine is an engine in which the combustion of a fuel occurs with an oxidizer in a combustion chamber. In an internal combustion engine, the expansion of the high-temperature and high -pressure gases produced by combustion apply direct force to some component of the engine...
. The sensor is usually located on the butterfly
Butterfly valve
A butterfly valve is a valve which can be used for isolating or regulating flow. The closing mechanism takes the form of a disk. Operation is similar to that of a ball valve, which allows for quick shut off. Butterfly valves are generally favored because they are lower in cost to other valve...
spindle so that it can directly monitor the position of the throttle valve butterfly.

The sensor is usually a potentiometer
Potentiometer
A potentiometer , informally, a pot, is a three-terminal resistor with a sliding contact that forms an adjustable voltage divider. If only two terminals are used , it acts as a variable resistor or rheostat. Potentiometers are commonly used to control electrical devices such as volume controls on...
, and therefore provides a variable resistance
Resistor
A linear resistor is a linear, passive two-terminal electrical component that implements electrical resistance as a circuit element.The current through a resistor is in direct proportion to the voltage across the resistor's terminals. Thus, the ratio of the voltage applied across a resistor's...
dependent upon the position of the valve (and hence throttle position).

The sensor signal is used by the engine control unit
Engine control unit
An engine control unit is a type of electronic control unit that determines the amount of fuel, ignition timing and other parameters an internal combustion engine needs to keep running...
(ECU) as an input to its control system. The ignition timing
Ignition timing
Ignition timing, in a spark ignition internal combustion engine , is the process of setting the angle relative to piston position and crankshaft angular velocity that a spark will occur in the combustion chamber near the end of the compression stroke...
and fuel injection
Fuel injection
Fuel injection is a system for admitting fuel into an internal combustion engine. It has become the primary fuel delivery system used in automotive petrol engines, having almost completely replaced carburetors in the late 1980s....
timing (and potentially other parameters) are altered depending upon the position of the throttle, and also depending on the rate of change of that position. For example, in fuel injected engines, in order to avoid stalling, extra fuel may be injected if the throttle is opened rapidly (mimicking the accelerator pump of carburetor
Carburetor
A carburetor , carburettor, or carburetter is a device that blends air and fuel for an internal combustion engine. It is sometimes shortened to carb in North America and the United Kingdom....
systems).

More advanced forms of the sensor are also used, for example an extra closed throttle position sensor (CTPS) may be employed to indicate that the throttle is completely closed.

Some ECUs also control the throttle position and if that is done the position sensor is utilised in a feedback loop to enable that control.

Related to the TPS are accelerator pedal sensors, which often include a wide open throttle
Wide open throttle
Wide open throttle refers to an internal combustion engine's maximum intake of air and fuel that occurs when the throttle plates inside the carburettor or throttle body are "wide open", providing the least resistance to the incoming air...
(WOT) sensor. The accelerator pedal sensors are used in "drive by wire
Drive by wire
Drive-by-wire, DbW, by-wire, or x-by-wire technology in the automotive industry replaces the traditional mechanical control systems with electronic control systems using electromechanical actuators and human-machine interfaces such as pedal and steering feel emulators...
" systems, and the most common use of a wide open throttle sensor is for the kick-down function on automatic transmission
Automatic transmission
An automatic transmission is one type of motor vehicle transmission that can automatically change gear ratios as the vehicle moves, freeing the driver from having to shift gears manually...
s.