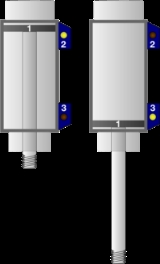 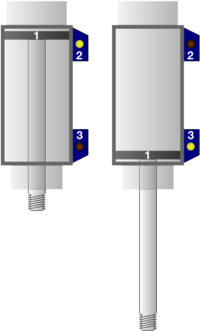 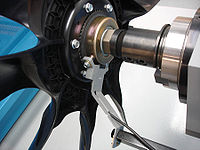 A Hall effect sensor is a transducer
Transducer
A transducer is a device that converts one type of energy to another. Energy types include electrical, mechanical, electromagnetic , chemical, acoustic or thermal energy. While the term transducer commonly implies the use of a sensor/detector, any device which converts energy can be considered a...
that varies its output voltage
Voltage
Voltage, otherwise known as electrical potential difference or electric tension is the difference in electric potential between two points — or the difference in electric potential energy per unit charge between two points...
in response to a magnetic field
Magnetic field
A magnetic field is a mathematical description of the magnetic influence of electric currents and magnetic materials. The magnetic field at any given point is specified by both a direction and a magnitude ; as such it is a vector field.Technically, a magnetic field is a pseudo vector;...
. Hall effect
Hall effect
The Hall effect is the production of a voltage difference across an electrical conductor, transverse to an electric current in the conductor and a magnetic field perpendicular to the current...
sensors are used for proximity switching, positioning, speed detection, and current sensing applications.

In its simplest form, the sensor operates as an analogue transducer
Transducer
A transducer is a device that converts one type of energy to another. Energy types include electrical, mechanical, electromagnetic , chemical, acoustic or thermal energy. While the term transducer commonly implies the use of a sensor/detector, any device which converts energy can be considered a...
, directly returning a voltage. With a known magnetic field, its distance from the Hall plate can be determined. Using groups of sensors, the relative position of the magnet can be deduced.

Electricity
Electricity
Electricity is a general term encompassing a variety of phenomena resulting from the presence and flow of electric charge. These include many easily recognizable phenomena, such as lightning, static electricity, and the flow of electrical current in an electrical wire...
carried through a conductor will produce a magnetic field that varies with current, and a Hall sensor can be used to measure the current without interrupting the circuit. Typically, the sensor is integrated with a wound core or permanent magnet that surrounds the conductor to be measured.

Frequently, a Hall sensor is combined with circuitry that allows the device to act in a digital (on/off) mode, and may be called a switch
Switch
In electronics, a switch is an electrical component that can break an electrical circuit, interrupting the current or diverting it from one conductor to another....
in this configuration. Commonly seen in industrial applications such as the pictured pneumatic cylinder
Pneumatic cylinder
Pneumatic cylinders are mechanical devices which utilize the power of compressed gas to produce a force in a reciprocating linear motion....
, they are also used in consumer equipment; for example some computer printer
Computer printer
In computing, a printer is a peripheral which produces a text or graphics of documents stored in electronic form, usually on physical print media such as paper or transparencies. Many printers are primarily used as local peripherals, and are attached by a printer cable or, in most new printers, a...
s use them to detect missing paper and open covers. When high reliability is required, they are used in keyboards
Keyboard technology
There are many types of keyboards, usually differentiated by the switch technology employed in their operation. Keyboards are defined by the number of highly durable switches that are incorporated into the system...
.

Hall sensors are commonly used to time the speed of wheels and shafts, such as for internal combustion engine
Internal combustion engine
The internal combustion engine is an engine in which the combustion of a fuel occurs with an oxidizer in a combustion chamber. In an internal combustion engine, the expansion of the high-temperature and high -pressure gases produced by combustion apply direct force to some component of the engine...
ignition
Ignition system
An ignition system is a system for igniting a fuel-air mixture. Ignition systems are well known in the field of internal combustion engines such as those used in petrol engines used to power the majority of motor vehicles, but they are also used in many other applications such as in oil-fired and...
timing
Ignition timing
Ignition timing, in a spark ignition internal combustion engine , is the process of setting the angle relative to piston position and crankshaft angular velocity that a spark will occur in the combustion chamber near the end of the compression stroke...
, tachometer
Tachometer
A tachometer is an instrument measuring the rotation speed of a shaft or disk, as in a motor or other machine. The device usually displays the revolutions per minute on a calibrated analogue dial, but digital displays are increasingly common...
s and anti-lock braking system
Anti-lock braking system
An anti-lock braking system is a safety system that allows the wheels on a motor vehicle to continue interacting tractively with the road surface as directed by driver steering inputs while braking, preventing the wheels from locking up and therefore avoiding skidding.An ABS generally offers...
s. They are used in brushless DC electric motor
Brushless DC electric motor
Brushless DC motors also known as electronically commutated motors are electric motors powered by direct-current electricity and having electronic commutation systems, rather than mechanical commutators and brushes...
s to detect the position of the permanent magnet. In the pictured wheel with two equally spaced magnets, the voltage from the sensor will peak twice for each revolution. This arrangement is commonly used to regulate the speed of disc
Disk storage
Disk storage or disc storage is a general category of storage mechanisms, in which data are digitally recorded by various electronic, magnetic, optical, or mechanical methods on a surface layer deposited of one or more planar, round and rotating disks...
drives.

A Hall probe contains an indium
Indium
Indium is a chemical element with the symbol In and atomic number 49. This rare, very soft, malleable and easily fusible post-transition metal is chemically similar to gallium and thallium, and shows the intermediate properties between these two...
compound semiconductor
Semiconductor
A semiconductor is a material with electrical conductivity due to electron flow intermediate in magnitude between that of a conductor and an insulator. This means a conductivity roughly in the range of 103 to 10−8 siemens per centimeter...
crystal such as indium antimonide, mounted on an aluminum backing plate, and encapsulated in the probe head. The plane of the crystal is perpendicular to the probe handle. Connecting leads from the crystal are brought down through the handle to the circuit box.

Hall effect sensor may require analog circuitry to be interfaced to microprocessors. These interfaces may include input diagnostics, fault protection for transient conditions, and short/open circuit detection. It may also provide and monitor the current to the hall effect sensor itself. There are precision IC products available to handle these features.