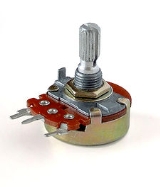 Overview
A potentiometer informally, a pot, is a three-terminal
Terminal (electronics)
A terminal is the point at which a conductor from an electrical component, device or network comes to an end and provides a point of connection to external circuits. A terminal may simply be the end of a wire or it may be fitted with a connector or fastener...
resistor
Resistor
A linear resistor is a linear, passive two-terminal electrical component that implements electrical resistance as a circuit element.The current through a resistor is in direct proportion to the voltage across the resistor's terminals. Thus, the ratio of the voltage applied across a resistor's...
with a sliding contact that forms an adjustable voltage divider. If only two terminals are used (one side and the wiper), it acts as a variable resistor or rheostat. Potentiometers are commonly used to control electrical devices such as volume controls on audio equipment. Potentiometers operated by a mechanism can be used as position transducer
Transducer
A transducer is a device that converts one type of energy to another. Energy types include electrical, mechanical, electromagnetic , chemical, acoustic or thermal energy. While the term transducer commonly implies the use of a sensor/detector, any device which converts energy can be considered a...
s, for example, in a joystick
Joystick
A joystick is an input device consisting of a stick that pivots on a base and reports its angle or direction to the device it is controlling. Joysticks, also known as 'control columns', are the principal control in the cockpit of many civilian and military aircraft, either as a center stick or...
.

Potentiometers are rarely used to directly control significant power (more than a watt
Watt
The watt is a derived unit of power in the International System of Units , named after the Scottish engineer James Watt . The unit, defined as one joule per second, measures the rate of energy conversion.-Definition:...
), since the power dissipated in the potentiometer would be comparable to the power in the controlled load (see infinite switch
Infinite switch
An infinite switch is a type of switch that allows variable power output and is so called because its average output is infinitely variable rather than being limited to a few switched levels. They utilize a bi-metallic strip conductive connection across terminals that disconnects with increased...
).

Why copper is not used as potentiometre wire?