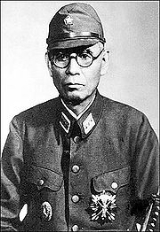 Encyclopedia
The Three Alls Policy was a Japanese scorched earth
Scorched earth
A scorched earth policy is a military strategy or operational method which involves destroying anything that might be useful to the enemy while advancing through or withdrawing from an area...
policy adopted in China
China
Chinese civilization may refer to:* China for more general discussion of the country.* Chinese culture* Greater China, the transnational community of ethnic Chinese.* History of China* Sinosphere, the area historically affected by Chinese culture...
during World War II
World War II
World War II, or the Second World War , was a global conflict lasting from 1939 to 1945, involving most of the world's nations—including all of the great powers—eventually forming two opposing military alliances: the Allies and the Axis...
, the three alls being: "Kill All", "Burn All" and "Loot All" (Chinese: 杀光、烧光、抢光). In Japanese documents, the policy was originally referred to as . This policy was designed as a retaliation against Chinese Communists following the Hundred Regiments Offensive
Hundred Regiments Offensive
The Hundred Regiments Offensive was a major campaign of the Communist Party of China's Red Army commanded by Peng Dehuai against the Imperial Japanese Army in Central China.-Background:...
.

The name "Sankō Sakusen", based on the Chinese term, was first popularized in Japan
Japan
Japan is an island nation in East Asia. Located in the Pacific Ocean, it lies to the east of the Sea of Japan, China, North Korea, South Korea and Russia, stretching from the Sea of Okhotsk in the north to the East China Sea and Taiwan in the south...
in 1957 when a former Japanese soldier released from the Fushun
Fushun
Fushun is a city in Liaoning, China, about 45 km east from Shenyang, with a population about 2,138 090 inhabitants at the 2010 census and an area of 11,271 km2, including 713 km2 of the city proper. Fushun is situated on the Hun He . It was formerly called Fouchouen in French...
war crime
War crime
War crimes are serious violations of the laws applicable in armed conflict giving rise to individual criminal responsibility...
internment center wrote a controversial book called The Three Alls: Japanese Confessions of War Crimes in China (new edition: Kanki Haruo, 1979), in which a number of Japanese veterans confessed to war crimes
Japanese war crimes
Japanese war crimes occurred during the period of Japanese imperialism, primarily during the Second Sino-Japanese War and World War II. Some of the incidents have also been described as an Asian Holocaust and Japanese war atrocities...
committed under the leadership of General Yasuji Okamura
Yasuji Okamura
- Notes :...
. The publishers were forced to stop the publication of the book after receiving death threats from Japanese militarists
Japanese militarism
refers to the ideology in the Empire of Japan that militarism should dominate the political and social life of the nation, and that the strength of the military is equal to the strength of a nation.-Rise of militarism :...
and ultranationalists
Japanese nationalism
encompasses a broad range of ideas and sentiments harbored by the Japanese people over the last two centuries regarding their native country, its cultural nature, political form and historical destiny...
. 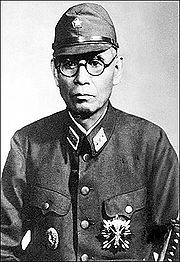 Initiated in 1940 by Major General Ryūkichi Tanaka
Ryukichi Tanaka
-External links:*- Notes :...
, the Sankō Sakusen was implemented in full scale in 1942 in north China
North China
thumb|250px|Northern [[People's Republic of China]] region.Northern China or North China is a geographical region of China. The heartland of North China is the North China Plain....
by General Yasuji Okamura
Yasuji Okamura
- Notes :...
who divided the territory of five provinces (Hebei
Hebei
' is a province of the People's Republic of China in the North China region. Its one-character abbreviation is "" , named after Ji Province, a Han Dynasty province that included what is now southern Hebei...
, Shandong
Shandong
' is a Province located on the eastern coast of the People's Republic of China. Shandong has played a major role in Chinese history from the beginning of Chinese civilization along the lower reaches of the Yellow River and served as a pivotal cultural and religious site for Taoism, Chinese...
, Shensi, Shanhsi, Chahaer) into "pacified", "semi-pacified" and "unpacified" areas. The approval of the policy was given by Imperial General Headquarters
Imperial General Headquarters
The as part of the Supreme War Council was established in 1893 to coordinate efforts between the Imperial Japanese Army and Imperial Japanese Navy during wartime...
Order Number 575 on 3 December 1941. Okamura's strategy involved burning down villages, confiscating grain and mobilizing peasants to construct collective hamlets. It also centered on the digging of vast trench lines and the building of thousands of miles of containment walls and moats, watchtowers and roads. These operations targeted for destruction "enemies pretending to be local people" and "all males between the ages of fifteen and sixty whom we suspect to be enemies."

In a study published in 1996, historian Mitsuyoshi Himeta claims that the Three Alls Policy, sanctioned by Emperor
Emperor of Japan
The Emperor of Japan is, according to the 1947 Constitution of Japan, "the symbol of the state and of the unity of the people." He is a ceremonial figurehead under a form of constitutional monarchy and is head of the Japanese Imperial Family with functions as head of state. He is also the highest...
Hirohito
Hirohito
, posthumously in Japan officially called Emperor Shōwa or , was the 124th Emperor of Japan according to the traditional order, reigning from December 25, 1926, until his death in 1989. Although better known outside of Japan by his personal name Hirohito, in Japan he is now referred to...
himself, was responsible for the deaths of "more than 2.7 million" Chinese civilian
Civilian
A civilian under international humanitarian law is a person who is not a member of his or her country's armed forces or other militia. Civilians are distinct from combatants. They are afforded a degree of legal protection from the effects of war and military occupation...
s. His works and those of Akira Fujiwara about the details of the operation were commented by Herbert P. Bix
Herbert P. Bix
Herbert P. Bix is the author of Hirohito and the Making of Modern Japan, an acclaimed account of the Japanese Emperor and the events which shaped modern Japanese imperialism....
in his Pulitzer Prize
Pulitzer Prize
The Pulitzer Prize is a U.S. award for achievements in newspaper and online journalism, literature and musical composition. It was established by American publisher Joseph Pulitzer and is administered by Columbia University in New York City...
–winning book, Hirohito and the Making of Modern Japan, who claims that the Sankō Sakusen far surpassed the Rape of Nanking
Nanking Massacre
The Nanking Massacre or Nanjing Massacre, also known as the Rape of Nanking, was a mass murder, genocide and war rape that occurred during the six-week period following the Japanese capture of the city of Nanjing , the former capital of the Republic of China, on December 13, 1937 during the Second...
not only in terms of numbers, but in brutality as well. In some places, the use of chemical warfare
Chemical warfare
Chemical warfare involves using the toxic properties of chemical substances as weapons. This type of warfare is distinct from Nuclear warfare and Biological warfare, which together make up NBC, the military acronym for Nuclear, Biological, and Chemical...
against civilian populations in contravention of international agreements was also alleged.

As with many aspects of Japan's World War II history, the nature and extent of Three Alls Policy is still a controversial issue. Because the now well-known name for this strategy is Chinese
Chinese language
The Chinese language is a language or language family consisting of varieties which are mutually intelligible to varying degrees. Originally the indigenous languages spoken by the Han Chinese in China, it forms one of the branches of Sino-Tibetan family of languages...
, some nationalist groups
Uyoku dantai
Uyoku dantai are Japanese nationalist right-wing groups.In 1996, the National Police Agency estimated that there are over 1000 right wing groups in Japan with about 100,000 members in total.-Tennō period:...
in Japan have even denied its veracity. The issue is partly confused by the use of scorched-earth tactics by the Kuomintang
Kuomintang
The Kuomintang of China , sometimes romanized as Guomindang via the Pinyin transcription system or GMD for short, and translated as the Chinese Nationalist Party is a founding and ruling political party of the Republic of China . Its guiding ideology is the Three Principles of the People, espoused...
government forces in numerous areas of central and northern China
Northern and southern China
Northern China and southern China are two approximate regions within China. The exact boundary between these two regions has never been precisely defined...
, against both the invading Japanese, and against Chinese civilian populations in rural areas of strong support for the Chinese Communist Party. Known in Japan as , Chinese soldiers would destroy the homes and fields of their own civilians in order to wipe out any possible supplies or shelter that could be utilised by the over-extended Japanese troops.