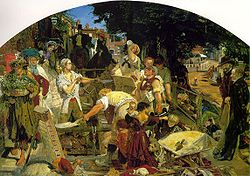 Thomas Edward Plint, was a stockbroker and important Pre-Raphaelite art collector who commissioned and owned several notable paintings. In 1839, with his friend Charles Reed, he started and edited a magazine called The Leeds Repository,

A religious evangelical, Plint served as a lay preacher at Leeds
Leeds
Leeds is a city and metropolitan borough in West Yorkshire, England. In 2001 Leeds' main urban subdivision had a population of 443,247, while the entire city has a population of 798,800 , making it the 30th-most populous city in the European Union.Leeds is the cultural, financial and commercial...
Congregational Chapel. In 1852, he commissioned Ford Madox Brown
Ford Madox Brown
Ford Madox Brown was an English painter of moral and historical subjects, notable for his distinctively graphic and often Hogarthian version of the Pre-Raphaelite style. Arguably, his most notable painting was Work...
to complete "Work
Work (painting)
Work is a painting by Ford Madox Brown, which is generally considered to be his most important achievement. It attempts to portray, both literally and analytically, the totality of the Victorian social system and the transition from a rural to an urban economy...
," a celebration of the protestant work ethic
Protestant work ethic
The Protestant work ethic is a concept in sociology, economics and history, attributable to the work of Max Weber...
. He demanded changes to the composition, notably the inclusion of a distributor of evangelical tracts, but died before its completion