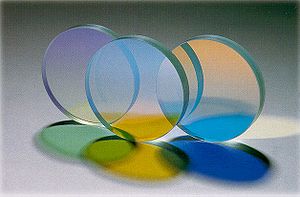 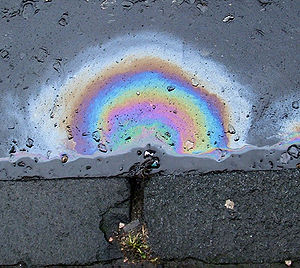 Thin-film optics is the branch of optic
Optic
Optic may mean:* optic, a British term for a device for dispensing fixed amounts of alcoholic spirits* Optics, the study of the behavior and properties of light* An optical element or component, such as a lens, prism, or mirror...
s that deals with very thin structured layers of different materials. In order to exhibit thin-film optics, the thickness of the layers of material must be on the order of the wavelengths of visible light (about 500 nm
Nanometre
A nanometre is a unit of length in the metric system, equal to one billionth of a metre. The name combines the SI prefix nano- with the parent unit name metre .The nanometre is often used to express dimensions on the atomic scale: the diameter...
). Layers at this scale can have remarkable reflective properties due to light wave interference and the difference in refractive index
Refractive index
In optics the refractive index or index of refraction of a substance or medium is a measure of the speed of light in that medium. It is expressed as a ratio of the speed of light in vacuum relative to that in the considered medium....
between the layers, the air, and the substrate. These effects alter the way the optic reflects
Reflection (physics)
Reflection is the change in direction of a wavefront at an interface between two differentmedia so that the wavefront returns into the medium from which it originated. Common examples include the reflection of light, sound and water waves...
and transmits
Transmission (telecommunications)
Transmission, in telecommunications, is the process of sending, propagating and receiving an analogue or digital information signal over a physical point-to-point or point-to-multipoint transmission medium, either wired, optical fiber or wireless...
light. This effect, known as thin-film interference
Thin-film interference
Thin-film interference is the phenomenon that occurs when incident light waves reflected by the upper and lower boundaries of a thin film interfere with one another to form a new wave. Studying this new wave can reveal information about the surfaces from which its components reflected, including...
, is observable in soap bubble
Soap bubble
A soap bubble is a thin film of soapy water enclosing air, that forms a hollow sphere with an iridescent surface. Soap bubbles usually last for only a few seconds before bursting, either on their own or on contact with another object. They are often used for children's enjoyment, but they are also...
s and oil slicks.

Thin films are used to create optical coating
Optical coating
An optical coating is one or more thin layers of material deposited on an optical component such as a lens or mirror, which alters the way in which the optic reflects and transmits light. One type of optical coating is an antireflection coating, which reduces unwanted reflections from surfaces, and...
s. Examples include low emissivity panes of glass
Glass
Glass is an amorphous solid material. Glasses are typically brittle and optically transparent.The most familiar type of glass, used for centuries in windows and drinking vessels, is soda-lime glass, composed of about 75% silica plus Na2O, CaO, and several minor additives...
for houses and cars, anti-reflective coating
Anti-reflective coating
An antireflective or anti-reflection coating is a type of optical coating applied to the surface of lenses and other optical devices to reduce reflection. This improves the efficiency of the system since less light is lost. In complex systems such as a telescope, the reduction in reflections also...
s on glasses
Glasses
Glasses, also known as eyeglasses , spectacles or simply specs , are frames bearing lenses worn in front of the eyes. They are normally used for vision correction or eye protection. Safety glasses are a kind of eye protection against flying debris or against visible and near visible light or...
, reflective baffles on car headlights, and for high precision optical filters
Filter (optics)
Optical filters are devices which selectively transmit light of different wavelengths, usually implemented as plane glass or plastic devices in the optical path which are either dyed in the mass or have interference coatings....
and mirror
Mirror
A mirror is an object that reflects light or sound in a way that preserves much of its original quality prior to its contact with the mirror. Some mirrors also filter out some wavelengths, while preserving other wavelengths in the reflection...
s. Another application of these coatings is spatial filter
Spatial filter
A spatial filter is an optical device which uses the principles of Fourier optics to alter the structure of a beam of coherent light or other electromagnetic radiation. Spatial filtering is commonly used to "clean up" the output of lasers, removing aberrations in the beam due to imperfect, dirty,...
ing.

Thin-film layers are common in the natural world. Their effects produce colors seen in soap bubbles and oil slicks, as well as in some animals. For example, the light collecting tapetum lucidum
Tapetum lucidum
The tapetum lucidum is a layer of tissue in the eye of many vertebrate animals....
of many nocturnal species and the photophore
Photophore
A photophore is a light-emitting organ which appears as luminous spots on various marine animals, including fish and cephalopods. The organ can be simple, or as complex as the human eye; equipped with lenses, shutters, color filters and reflectors...
s of bioluminescent
Bioluminescence
Bioluminescence is the production and emission of light by a living organism. Its name is a hybrid word, originating from the Greek bios for "living" and the Latin lumen "light". Bioluminescence is a naturally occurring form of chemiluminescence where energy is released by a chemical reaction in...
squid (e.g., the Bobtail squid
Bobtail squid
Bobtail squid are a group of cephalopods closely related to cuttlefish. Bobtail squid tend to have a rounder mantle than cuttlefish and have no cuttlebone. They have eight suckered arms and two tentacles and are generally quite small...
). In many cases, iridescent
Iridescence
Iridescence is generally known as the property of certain surfaces which appear to change color as the angle of view or the angle of illumination changes...
colors that were once thought to result from planar layers, such as in opal
Opal
Opal is an amorphous form of silica related to quartz, a mineraloid form, not a mineral. 3% to 21% of the total weight is water, but the content is usually between 6% to 10%. It is deposited at a relatively low temperature and may occur in the fissures of almost any kind of rock, being most...
s, peacocks, and the Blue Morpho
Blue Morpho
The Blue Morpho refers to several species of Morpho butterfly, including:* Morpho menelaus * Morpho peleides * Morpho rhetenor...
butterfly, turn out to result from more complex periodic photonic-crystal structures.