Encyclopedia
A Thermal Imaging Camera (colloquially known as a TIC) is a type of thermographic camera
Thermographic camera
A thermographic camera or infrared camera is a device that forms an image using infrared radiation, similar to a common camera that forms an image using visible light...
used in firefighting. By rendering infrared radiation as visible light, such cameras allow firefighter
Firefighter
Firefighters are rescuers extensively trained primarily to put out hazardous fires that threaten civilian populations and property, to rescue people from car incidents, collapsed and burning buildings and other such situations...
s to see areas of heat through smoke, darkness, or heat-permeable barriers. Thermal imaging cameras are typically handheld, but may be helmet-mounted. They are constructed using heat- and water-resistant housings, and ruggedized to withstand the hazards of fireground operations. While they are expensive pieces of equipment, their popularity and adoption by firefighters in the United States is increasing markedly due to the increased availability of government equipment grant
Grant (money)
Grants are funds disbursed by one party , often a Government Department, Corporation, Foundation or Trust, to a recipient, often a nonprofit entity, educational institution, business or an individual. In order to receive a grant, some form of "Grant Writing" often referred to as either a proposal...
s following the September 11 attacks in 2001. Thermal imaging cameras pick up body heat, and they are normally used in cases where people are trapped where rescuers cannot find them.

A thermal imaging camera consists of five components: an optic system, detector, amplifier, signal processing, and display. Fire-service specific thermal imaging cameras incorporate these components in a heat-resistant, ruggedized, and waterproof housing. These parts work together to render infrared radiation, such as that given off by warm objects or flames, into a visible light representation in real time. The camera display shows infrared output differentials, so two objects with the same temperature will appear to be the same "color". Many thermal imaging cameras use grayscale to represent normal temperature objects, but highlight dangerously hot surfaces in different colors.

Cameras may be handheld or helmet-mounted. A handheld camera requires one hand to position and operate, leaving only one free hand for other tasks, but can be easily transferred between firefighters. The majority of thermal imaging cameras in use in the fire service are handheld models.

The National Institute of Standards and Technology
National Institute of Standards and Technology
The National Institute of Standards and Technology , known between 1901 and 1988 as the National Bureau of Standards , is a measurement standards laboratory, otherwise known as a National Metrological Institute , which is a non-regulatory agency of the United States Department of Commerce...
Fire Research division is the lead government agency developing performance standards for fire service thermal imaging cameras in the United States, although the U.S. Army Night Vision
Night vision
Night vision is the ability to see in low light conditions. Whether by biological or technological means, night vision is made possible by a combination of two approaches: sufficient spectral range, and sufficient intensity range...
Laboratory has contributed to the effort. Preliminary recommendations from the field include visible low-battery warnings, ability to withstand full immersion in water, and the ability to provide meaningful visual readouts beyond 2,000°F (~1,100°C). 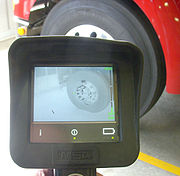 Since thermal imaging cameras can "see" through darkness or smoke, they allow firefighters to quickly find the seat of a structure fire
Structure fire
A structure fire is a fire involving the structural components of various residential buildings ranging from single-family detached homes and townhouses to apartments and tower blocks, or various commercial buildings ranging from offices to shopping malls...
, or see the heat signature of visually obscured victims. They can be used to search for victims outdoors on a cool night, spot smoldering fires inside a wall, or detect overheating electrical wiring. Thermal imaging cameras were credited with saving multiple lives per year through victim identification and removal from low visibility conditions as early as 1999.

In addition to the ability to see through dense smoke, thermal imaging cameras also can see materials involved in spontaneous, low level combustion. In one documented instance, a TIC was used to isolate a smoldering hot spot in a grain storage facility; by isolating and removing only the affected grain, 75% of the stored crop was saved. In another, Tennessee firefighters used a thermal imaging camera to detect a hidden fire inside a cinder railroad bed, resulting in an estimated $500,000 cost avoidance. Thermal imaging cameras have also been reported to be particularly useful for fighting fires in cellulose insulation, and for ascertaining that a structure is safe to reenter after a fire has been put out. Ventura County, California firefighters used their TIC to find a cat which had become sealed inside a walkway during construction.

Prototypes of helmet-mounted thermal imaging cameras were first publicized in 1992, but a detailed evaluation of their performance in real world situations was not published until 2007. The model evaluated in 2007 weighed approximately 1.5 lbs, substantially increasing weight over an unadorned helmet. However, the ability to "use the devices while they were also pulling hose and carrying tools" was favorably received by firefighters evaluating the product. Benefits of helmet mounted TICs included that multiple firefighters each observed different aspects of a fire, while drawbacks included firefighters relaxing safety discipline. In timed testing, teams of firefighters with helmet-mounted cameras completed search tasks substantially faster, were less disoriented, and used less air than teams with a single handheld camera, who in turn fared better than teams with no TIC at all.

A limitation of these and similar devices has been their poor depth perception
Depth perception
Depth perception is the visual ability to perceive the world in three dimensions and the distance of an object. Depth sensation is the ability to move accurately, or to respond consistently, based on the distances of objects in an environment....
(the user has a hard time judging how far away objects are). This increases the likelihood that the user will trip over or run into obstacles, or have other distance-related problems. An additional limitation of infrared technology is that since materials at the same temperature are shown as the same color, the display will not depict many details normally viewable in visible light.

While thermal imaging technology has long been in use in specialized law enforcement and military applications, its acceptance by the fire service has been hampered by the cost of the cameras. The Seattle Fire Department
Seattle Fire Department
The Seattle Fire Department is the medical, rescue, and fire protection force of Seattle, Washington and it is the largest metropolitan fire department in the Pacific Northwest. It is also a part of Medic One.-History of the department:...
acquired its first thermal imaging camera in 1997, for a cost of $16,000. In 2000, the Los Angeles Times
Los Angeles Times
The Los Angeles Times is a daily newspaper published in Los Angeles, California, since 1881. It was the second-largest metropolitan newspaper in circulation in the United States in 2008 and the fourth most widely distributed newspaper in the country....
called the thermal imaging camera "[p]erhaps the best advance in fire equipment in the last 25 years—and the most expensive". Fire departments have pursued various sources and methods to fund thermal imaging cameras including direct budgeting, grants, and charity donations, among others. One fire chief observed that the same sorts of cost issues plagued SCBA acquisitions during their initial adoption. In 2001, the Federal Emergency Management Agency
Federal Emergency Management Agency
The Federal Emergency Management Agency is an agency of the United States Department of Homeland Security, initially created by Presidential Reorganization Plan No. 1 of 1978 and implemented by two Executive Orders...
(FEMA) began issuing grants under the Firefighter Investment and Response Enhancement (FIRE) Act, which provided $100 million to U.S. fire agencies during that fiscal year. Many departments used these funds to purchase thermal imaging cameras. However, replacing a damaged thermal imaging camera can be a substantial challenge for a department which acquired the camera outside the normal budget process.

As departments began acquiring thermal imaging cameras, they were typically assigned to specialized units, such as heavy rescue and truck companies. Thermal imaging cameras are routinely assigned to Rapid Intervention Teams
Firefighter Assist and Search Team
A Firefighter Assist and Search Team , also known as a Rapid Intervention Team/Crew , is a team of two or more firefighters dedicated solely to search and rescue of other firefighters in distress. FAST shall have no other operational assignment during an incident...
, to enable them to more effectively reach and free trapped firefighters. Since 2003, the lack of a properly used thermal imaging camera has been recognized by NIOSH
National Institute for Occupational Safety and Health
The National Institute for Occupational Safety and Health is the United States’ federal agency responsible for conducting research and making recommendations for the prevention of work-related injury and illness. NIOSH is part of the Centers for Disease Control and Prevention within the U.S...
as an avoidable factor contributing to firefighter injuries and deaths, and the fact that a thermal imaging cameras not used was cited in a 2005 NIOSH report as a contributing factor to the 2004 line of duty death of Houston firefighter Kevin Kulow. One of the recommendations of the Charleston Sofa Super Store fire
Charleston Sofa Super Store fire
The Charleston Sofa Super Store fire occurred on June 18, 2007, in Charleston, South Carolina, United States, in which a flashover and structural collapse contributed to the deaths of nine Charleston firefighters.-Fire and collapse:...
post incident assessment and review team was "the purchase of
a standard model thermal imaging camera for each engine and ladder company".
The source of this article is wikipedia, the free encyclopedia.  The text of this article is licensed under the GFDL.