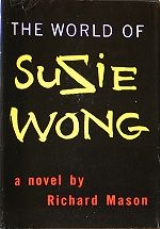 Encyclopedia
The World of Suzie Wong is a 1957 novel
Novel
A novel is a book of long narrative in literary prose. The genre has historical roots both in the fields of the medieval and early modern romance and in the tradition of the novella. The latter supplied the present generic term in the late 18th century....
written by Richard Mason. The main characters are Robert Lomax, a young British artist living in Hong Kong, and Suzie Wong, the title character, a Chinese woman who works as a prostitute. The novel has been adapted into a play, spawned two unofficial sequels, a hit film and a ballet.

Robert Lomax is a young Englishman who, after leaving National Service
National service
National service is a common name for mandatory government service programmes . The term became common British usage during and for some years following the Second World War. Many young people spent one or more years in such programmes...
, decides to go and work on a plantation in British Malaya
British Malaya
British Malaya loosely described a set of states on the Malay Peninsula and the Island of Singapore that were brought under British control between the 18th and the 20th centuries...
. During his time in Malaya Lomax decides as an experiment to pursue a new career as an artist for a year.

Lomax visits Hong Kong
Hong Kong
Hong Kong is one of two Special Administrative Regions of the People's Republic of China , the other being Macau. A city-state situated on China's south coast and enclosed by the Pearl River Delta and South China Sea, it is renowned for its expansive skyline and deep natural harbour...
in search of inspiration for his paintings. He checks into the Nam Kok Hotel, not realizing, at first, that it is an unofficial brothel catering mainly to British and American sailors. However, the discovery of that fact only makes the hotel more charming in Lomax's opinion and a better source of subject matter for his paintings.

Lomax quickly befriends most of the hotel's bargirl
Bargirl
A bargirl is a woman who works as a hostess or dancer in bars to provide company or sexual services to patrons; the exact nature of services and varieties of bar varying by country/region. In most cases, these cater mostly to male clients, although in some cases women are also clients...
s but is most fascinated by the archetypal "hooker with a heart of gold
Hooker with a heart of gold
The hooker with a heart of gold is a stock character in which a "fallen woman", usually a prostitute, is a kindly and internally wholesome person.-Characteristics:...
", Suzie Wong. Wong previously introduced herself to him as Wong Mee-ling, a rich virgin whose father had five houses and more cars than she could count, and initially pretended not to recognize him at the hotel. Lomax had originally decided that he would not sleep with any of the bargirls at the hotel because he would be living with them for a long time and did not want to put a strain on their relationships. However, it soon emerges that Suzie Wong is interested in him, not as a customer but as a serious boyfriend. Although Suzie Wong becomes the kept woman of two other men and Robert Lomax briefly becomes attracted to a young British nurse, Lomax and Wong are eventually reunited and the novel ends happily.

The novel was adapted into a stage production and was first produced in 1958 by David Merrick
David Merrick
David Merrick was a prolific Tony Award-winning American theatrical producer.-Life and career:Born David Lee Margulois to Jewish parents in St. Louis, Missouri, Merrick graduated from Washington University, then studied law at the Jesuit-run Saint Louis University School of Law...
and starred William Shatner
William Shatner
William Alan Shatner is a Canadian actor, musician, recording artist, and author. He gained worldwide fame and became a cultural icon for his portrayal of James T...
and France Nuyen
France Nuyen
France Nuyen is a French actress.-Biography:Nuyen was born in Marseille, Bouches-du-Rhône, Provence-Alpes-Côte d'Azur, France. Her mother was French, her father Vietnamese. During World War II, her mother and grandfather were persecuted by the Nazis for being Gypsies...
. Tsai Chin
Tsai Chin (actress)
Tsai Chin , also known as Irene Chow, is a Chinese-born actress living in England.-Early life, family & education:Chin was born to Peking Opera actor Zhou Xinfang in 1936. She spent her early life in Shanghai. She had two short marriages which both ended in divorce. Her brother is Michael...
played the title role in the West End
West End theatre
West End theatre is a popular term for mainstream professional theatre staged in the large theatres of London's 'Theatreland', the West End. Along with New York's Broadway theatre, West End theatre is usually considered to represent the highest level of commercial theatre in the English speaking...
1959 production. The book was later adapted into a hit 1960 film
The World of Suzie Wong (film)
The World of Suzie Wong is a 1960 British-American romantic drama film directed by Richard Quine. The screenplay by John Patrick was adapted from the stage play by Paul Osborn, which was based on the novel of the same title by Richard Mason...
, directed by Richard Quine
Richard Quine
Richard Quine was an American stage, film, and radio actor and film director.Quine was born in Detroit. He made his Broadway debut in the Jerome Kern/Oscar Hammerstein II musical Very Warm for May in 1939 and appeared in My Sister Eileen the following year...
and starring William Holden
William Holden
William Holden was an American actor. Holden won the Academy Award for Best Actor in 1954 and the Emmy Award for Best Actor in 1974...
, Nancy Kwan
Nancy Kwan
Nancy "Ka Shen" Kwan is a Eurasian-American actress, who played a pivotal role in the acceptance of actors of Asian descent in major Hollywood film roles...
, Sylvia Syms
Sylvia Syms
Sylvia M. L. Syms OBE is a British actress. She is probably best known for her roles in the films Woman in a Dressing Gown , Ice-Cold in Alex , No Trees in the Street , Victim and The Tamarind Seed...
, and Michael Wilding
Michael Wilding (actor)
-Early life:Born in Leigh-on-Sea, Essex, England, Wilding was a successful commercial artist when he joined the art department of a London film studio in 1933. He soon embarked on an acting career.-Career:...
. Executive Producer Ray Stark
Ray Stark
Ray Stark was an American film producer and powerbroker known for his Machiavellian ways.While putting together the Broadway musical Funny Girl - the highly fictionalized account of the life of his mother-in-law, Fanny Brice - its producer David Merrick took Stark and his wife to see an unknown...
.

There is also an unofficial modern interpretation of the World of Suzie Wong by Leon Pang written in 2010 entitled Suzie ISBN 978-0-9566137-0-7. One of the chracters in the book takes on the name of Suzie Wong in an attempt to latch onto the fame of the original. The novel explores sixty years of changes in Hong Kong and themes including poverty
Poverty
Poverty is the lack of a certain amount of material possessions or money. Absolute poverty or destitution is inability to afford basic human needs, which commonly includes clean and fresh water, nutrition, health care, education, clothing and shelter. About 1.7 billion people are estimated to live...
, the rise of China
China
Chinese civilization may refer to:* China for more general discussion of the country.* Chinese culture* Greater China, the transnational community of ethnic Chinese.* History of China* Sinosphere, the area historically affected by Chinese culture...
, employment
Employment
Employment is a contract between two parties, one being the employer and the other being the employee. An employee may be defined as:- Employee :...
instability in the world in 2008, outsourcing
Outsourcing
Outsourcing is the process of contracting a business function to someone else.-Overview:The term outsourcing is used inconsistently but usually involves the contracting out of a business function - commonly one previously performed in-house - to an external provider...
and the failings of capitalism
Capitalism
Capitalism is an economic system that became dominant in the Western world following the demise of feudalism. There is no consensus on the precise definition nor on how the term should be used as a historical category...
.


Locations from the novel

The Nam Kok Hotel featured in the story is based on the Luk Kwok Hotel on Gloucester Road
Gloucester Road, Hong Kong
Gloucester Road is a major road in Hong Kong. It is in the north of Wan Chai and East Point on Hong Kong Island. It connects to Harcourt Road at its western end and it ends east along west side of Victoria Park. It forms part of Hong Kong's Route 4 and connects to the Island Eastern Corridor via...
in Wanchai, where Mason stayed, although the building is now more modern, the site having been redeveloped in the 1980s. Also, unlike the hotel in the book, the modern hotel is not a pseudo-brothel but is one of many smaller smart hotels on Hong Kong Island
Hong Kong Island
Hong Kong Island is an island in the southern part of the Hong Kong Special Administrative Region. It has a population of 1,289,500 and its population density is 16,390/km², as of 2008...
.