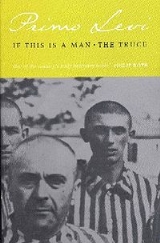 Encyclopedia
The Truce is a book by the Italian
Italy
Italy , officially the Italian Republic languages]] under the European Charter for Regional or Minority Languages. In each of these, Italy's official name is as follows:;;;;;;;;), is a unitary parliamentary republic in South-Central Europe. To the north it borders France, Switzerland, Austria and...
author Primo Levi
Primo Levi
Primo Michele Levi was an Italian Jewish chemist and writer. He was the author of two novels and several collections of short stories, essays, and poems, but is best known for If This Is a Man, his account of the year he spent as a prisoner in the Auschwitz concentration camp in Nazi-occupied Poland...
. It describes his experiences returning from the concentration camp
Nazi concentration camps
Nazi Germany maintained concentration camps throughout the territories it controlled. The first Nazi concentration camps set up in Germany were greatly expanded after the Reichstag fire of 1933, and were intended to hold political prisoners and opponents of the regime...
at Auschwitz
Auschwitz concentration camp
Concentration camp Auschwitz was a network of Nazi concentration and extermination camps built and operated by the Third Reich in Polish areas annexed by Nazi Germany during World War II...
after the Second World War. The Truce, the literal translation of the title, is the name of the translation published in Britain; the US title is The Reawakening.

This book was adapted into a screenplay by Tonino Guerra
Tonino Guerra
Tonino Guerra is an Italian poet, writer and screenwriter who has collaborated with some of the most prominent film directors of the world.-Biography:Guerra was born in Santarcangelo di Romagna....
for a film directed by Francesco Rosi
Francesco Rosi
Francesco Rosi is an Italian film director. He is the father of actress Carolina Rosi.-Biography:After studying Law, but hoping to study film, Rosi entered the industry as an assistant to Luchino Visconti on La Terra trema...
, also titled The Truce
The Truce (1997 film)
The Truce is a 1997 film directed by Francesco Rosi, written by Tonino Guerra, based on Primo Levi's autobiography, The Truce. The film deals with Primo Levi's experiences returning from the concentration camp at Auschwitz during the Second World War....
.
The source of this article is wikipedia, the free encyclopedia.  The text of this article is licensed under the GFDL.