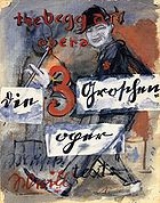 Overview
The Threepenny Opera is a musical
Musical theatre
Musical theatre is a form of theatre combining songs, spoken dialogue, acting, and dance. The emotional content of the piece – humor, pathos, love, anger – as well as the story itself, is communicated through the words, music, movement and technical aspects of the entertainment as an...
by German dramatist Bertolt Brecht
Bertolt Brecht
Bertolt Brecht was a German poet, playwright, and theatre director.An influential theatre practitioner of the 20th century, Brecht made equally significant contributions to dramaturgy and theatrical production, the latter particularly through the seismic impact of the tours undertaken by the...
and composer Kurt Weill
Kurt Weill
Kurt Julian Weill was a German-Jewish composer, active from the 1920s, and in his later years in the United States. He was a leading composer for the stage who was best known for his fruitful collaborations with Bertolt Brecht...
, in collaboration with translator Elisabeth Hauptmann
Elisabeth Hauptmann
Elisabeth Hauptmann was a German writer who worked with Bertolt Brecht....
and set designer Caspar Neher
Caspar Neher
Caspar Neher was an Austrian-German scenographer and librettist, known principally for his career-long working relationship with Bertolt Brecht.Neher was born in Augsburg...
. It was adapted from an 18th-century English ballad opera
Ballad opera
The term ballad opera is used to refer to a genre of English stage entertainment originating in the 18th century and continuing to develop in the following century and later. There are many types of ballad opera...
, John Gay's
John Gay
John Gay was an English poet and dramatist and member of the Scriblerus Club. He is best remembered for The Beggar's Opera , set to music by Johann Christoph Pepusch...
The Beggar's Opera
The Beggar's Opera
The Beggar's Opera is a ballad opera in three acts written in 1728 by John Gay with music arranged by Johann Christoph Pepusch. It is one of the watershed plays in Augustan drama and is the only example of the once thriving genre of satirical ballad opera to remain popular today...
, and offers a Marxist
Marxism
Marxism is an economic and sociopolitical worldview and method of socioeconomic inquiry that centers upon a materialist interpretation of history, a dialectical view of social change, and an analysis and critique of the development of capitalism. Marxism was pioneered in the early to mid 19th...
critique of the capitalist
Capitalism
Capitalism is an economic system that became dominant in the Western world following the demise of feudalism. There is no consensus on the precise definition nor on how the term should be used as a historical category...
world. It opened on 31 August 1928 at Berlin's Theater am Schiffbauerdamm
Theater am Schiffbauerdamm
The Theater am Schiffbauerdamm is a theatre building at the Schiffbauerdamm riverside in the Mitte district of Berlin, Germany, opened on November 19, 1892. Since 1954 it is home to the Berliner Ensemble theatre company, founded in 1949 by Helene Weigel and Bertolt Brecht.The original name of the...
.

By 1933, when Brecht and Weill were forced to leave Germany by the rise of Hitler, the play had been translated into 18 languages and performed more than 10,000 times on European stages.
Set in a marginally-anachronistic Victorian
Victorian era
The Victorian era of British history was the period of Queen Victoria's reign from 20 June 1837 until her death on 22 January 1901. It was a long period of peace, prosperity, refined sensibilities and national self-confidence...
London, the play focuses on Macheath, an amoral, antiheroic criminal.

Macheath (Mackie Messer, or Mack the Knife
Mack the Knife
"Mack the Knife" or "The Ballad of Mack the Knife", originally "Die Moritat von Mackie Messer", is a song composed by Kurt Weill with lyrics by Bertolt Brecht for their music drama Die Dreigroschenoper, or, as it is known in English, The Threepenny Opera. It premiered in Berlin in 1928 at the...
) marries Polly Peachum.

What are occupational groups in threepenny opera
More
x