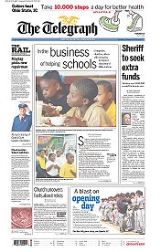 Encyclopedia
The Telegraph, frequently referred to as the Macon Telegraph, is a McClatchy
The McClatchy Company
The McClatchy Company is a publicly traded American publishing company based in Sacramento, California. It operates 30 daily newspapers in 15 states and has an average weekday circulation of 2.2 million and Sunday circulation of 2.8 million...
newspaper in Macon
Macon, Georgia
Macon is a city located in central Georgia, US. Founded at the fall line of the Ocmulgee River, it is part of the Macon metropolitan area, and the county seat of Bibb County. A small portion of the city extends into Jones County. Macon is the biggest city in central Georgia...
, Georgia
Georgia (U.S. state)
Georgia is a state located in the southeastern United States. It was established in 1732, the last of the original Thirteen Colonies. The state is named after King George II of Great Britain. Georgia was the fourth state to ratify the United States Constitution, on January 2, 1788...
, United States
United States
The United States of America is a federal constitutional republic comprising fifty states and a federal district...
, and is the primary print news organ in Middle Georgia. It is the third-largest newspaper in the state (after the Atlanta Journal-Constitution and Augusta Chronicle
Augusta Chronicle
The Augusta Chronicle is the major daily newspaper of Augusta, Georgia and is one of the oldest newspapers in the United States. The paper is known for its coverage of the Masters Tournament, which is played in Augusta. Among locals, the paper is commonly referred to as "The AC"-History:The paper...
).

While many other papers were being published in early Macon, at least five were absorbed into The Telegraph and most others folded. However, in 1884, a teenaged Telegraph employee spent $
Dollar
The dollar is the name of the official currency of many countries, including Australia, Belize, Canada, Ecuador, El Salvador, Hong Kong, New Zealand, Singapore, Taiwan, and the United States.-Etymology:...
8 and founded The Macon Evening News, which would eventually compete with the older, morning paper for readers.

In 1914, the Anderson brothers, William T. and Peyton T., purchased the paper. Under their leadership, the paper inaugurated a special page focusing on the black community. They also purchased The Macon News and combined some staff positions between the two papers. The News continued to publish in the afternoon, while the Telegraph remained the morning paper.

In 1946, Peyton T. Anderson's son, Peyton, took over the papers. He became known for giving his editors great freedom to report the facts, as well as being a "pillar of the community". He sold the Telegraph and News in 1969 to Knight Newspapers
Knight Ridder
Knight Ridder was an American media company, specializing in newspaper and Internet publishing. Until it was bought by The McClatchy Company on June 27, 2006, it was the second-largest newspaper publisher in the United States, with 32 daily newspapers sold.- History :The corporate ancestors of...
, and subsequently invested the proceeds. Much of that money was left in his will
Will (law)
A will or testament is a legal declaration by which a person, the testator, names one or more persons to manage his/her estate and provides for the transfer of his/her property at death...
to start one of Macon's major charitable foundations.

The new ownership merged with Ridder Publications in 1974 to create Knight Ridder. At the same time, the Saturday editions of the Telegraph and News merged.

This foreshadowed a larger merger, as in 1983, the two papers' daily editions merged. The new Macon Telegraph and News was published as a morning paper seven days a week. During this era, Randall Savage and Jackie Crosby earned the paper its lone Pulitzer Prize
Pulitzer Prize
The Pulitzer Prize is a U.S. award for achievements in newspaper and online journalism, literature and musical composition. It was established by American publisher Joseph Pulitzer and is administered by Columbia University in New York City...
to date in 1985
1985 Pulitzer Prize
The following are the Pulitzer Prizes for 1985.-Journalism awards:*Public Service:** The Fort Worth Star-Telegram, For reporting by Mark J. Thompson which revealed that nearly 250 U.S...
for an investigation into academic and athletics at the University of Georgia
University of Georgia
The University of Georgia is a public research university located in Athens, Georgia, United States. Founded in 1785, it is the oldest and largest of the state's institutions of higher learning and is one of multiple schools to claim the title of the oldest public university in the United States...
and the Georgia Institute of Technology
Georgia Institute of Technology
The Georgia Institute of Technology is a public research university in Atlanta, Georgia, in the United States...
.

The paper officially changed its name back to The Macon Telegraph in 1990, bringing over a century of The Macon News to an end. Even so, some local residents continue to refer to the paper by the former, combined name.

In 2005, the name "Macon" was also dropped from the masthead
Masthead (publishing)
The masthead is a list, published in a newspaper or magazine, of its staff. In some publications it names only the most senior individuals; in others, it may name many or all...
, possibly signaling greater emphasis on the Middle Georgia area as a whole. As a result, the official, correct name of the newspaper is The Telegraph.