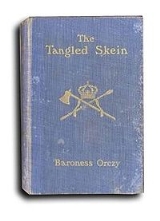 The book is a period romance and is dedicated to "my little son Jack" (who was born in 1899).

In The Tangled Skein, Baroness Orczy
Baroness Orczy
Baroness Emma Magdolna Rozália Mária Jozefa Borbála "Emmuska" Orczy de Orczi was a British novelist, playwright and artist of Hungarian noble origin. She was most notable for her series of novels featuring the Scarlet Pimpernel...
does not paint Queen Mary
Mary I of England
Mary I was queen regnant of England and Ireland from July 1553 until her death.She was the only surviving child born of the ill-fated marriage of Henry VIII and his first wife Catherine of Aragon. Her younger half-brother, Edward VI, succeeded Henry in 1547...
nearly so black as she is usually portrayed. Indeed Mary is depicted as so passionately loving as to be almost lovable, a woman of strong emotions, invariably swayed by justice.

The tangling of the skein results from Mary’s love for (the fictional) Robert d’Esclade, fifth Duke
Duke
A duke or duchess is a member of the nobility, historically of highest rank below the monarch, and historically controlling a duchy...
of Wessex
Wessex
The Kingdom of Wessex or Kingdom of the West Saxons was an Anglo-Saxon kingdom of the West Saxons, in South West England, from the 6th century, until the emergence of a united English state in the 10th century, under the Wessex dynasty. It was to be an earldom after Canute the Great's conquest...
, whom the people of England desire to become King Consort
King consort
King consort is an alternative title to the more usual "prince consort" - which is a position given in some monarchies to the husband of a reigning queen. It is a symbolic title only, the sole constitutional function of the holder being similar to a prince consort, which is the male equivalent of a...
.

Robert is the embodiment of all chivalry, and every virtue dear to the heart of an Englishman. He is, so far, fancy free, but beyond deep respect for, and loyalty to, his Queen, he has no other feeling, and the idea of marriage with her merely for political reasons is repulsive to him. He is at the same time half betrothed, but not bindingly, to Lady Ursula Glynde, whom he has not seen since her babyhood.

Wessex is repelled by the idea of having his wife thrust upon him in any way, and purposely avoids the girl, in which he is, unknown to himself, aided and abetted by the Queen, who tries jealously to guard him against falling a victim to Ursula’s undoubted fascinations.

The Lady Ursula is exceedingly beautiful, very, sprightly in manner, and a favourite wherever she goes. As soon as she realises for what purpose Mary is keeping her in the background, Ursula’s spirit is aroused to the point of self-defence. To begin with, she is in love with Wessex, the report of his nobility and goodness and the feeling that in a measure he belongs to her, have influenced her all her life; but she has also a deeper interest at stake in the fact that on her father’s death- bed she bound herself by a promise to go into a convent if she should not marry Wessex.

Ursula has no fancy to take the veil, so merry, so utterly independent is she that she takes to breaking bounds in order to frustrate the Queen’s jealousy; and bring herself under the notice of her betrothed, which she achieves, and all would have gone well for the young couple but for the power of Cardinal
Cardinal (Catholicism)
A cardinal is a senior ecclesiastical official, usually an ordained bishop, and ecclesiastical prince of the Catholic Church. They are collectively known as the College of Cardinals, which as a body elects a new pope. The duties of the cardinals include attending the meetings of the College and...
de Moreno, and his tool Don Mignel, Marquis de Saurez.

The Cardinal is in England in order to negotiate the marriage between Philip II of Spain
Philip II of Spain
Philip II was King of Spain, Portugal, Naples, Sicily, and, while married to Mary I, King of England and Ireland. He was lord of the Seventeen Provinces from 1556 until 1581, holding various titles for the individual territories such as duke or count....
and Mary. His only stumbling block he discovers to be Wessex, and with a view to clearing him out of the way he first tries to bring about the marriage between the Duke and Lady Ursula. But, Mary discovers the ruse, and, in a fit of rage, declares that if this comes about his Eminence may leave England immediately; she will not marry Philip, Then the Cardinal has to set to work to part the lovers, a far more difficult and intricate business than bringing them together.

It costs a life, Wessex his freedom, and Lady Ursula her good name before it can be affected. The skein is more hopelessly tangled than before, and still Mary remains obdurate. To straighten the tangle it takes the forfeiting of Mary’s dignity, her love, and her will. The Cardinal’s victory is gained at the expense of his own career. The lovers themselves are left with scars they can never forget.
The source of this article is wikipedia, the free encyclopedia.  The text of this article is licensed under the GFDL.